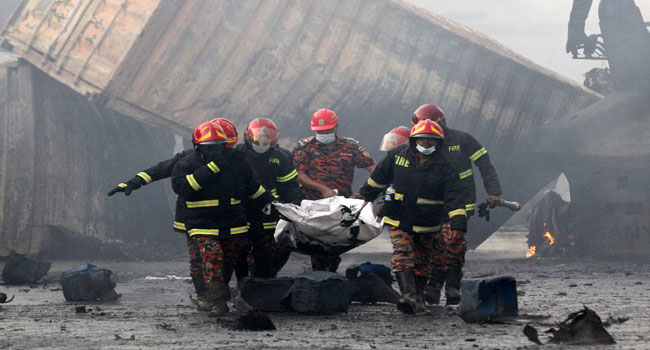 At least 49 people died and hundreds were injured after a fire sparked a huge chemical explosion at a shipping container depot in Bangladesh, officials said on Sunday.

The toll was expected to rise, with some of the more than 300 people injured in serious condition, officials said, while volunteers reported that there were more bodies inside the smoldering, wreckage-strewn facility.

The fire started late on Saturday at the depot in Sitakunda, which stores around 4,000 containers, many of them filled with garments destined for Western retailers. The facility is about 40 kilometres (25 miles) from the major southern port of Chittagong.

Following the fire, containers holding chemicals exploded, engulfing firefighters, volunteers and journalists in an inferno, hurtling people and debris through the air, and turning the night sky a blazing orange.

Buildings located kilometres away rattled with the force of the blast.

Elias Chowdhury, regional chief doctor, told AFP that the number of dead was 49 but would increase. Firefighters continued to douse pockets of fire with hoses on Sunday.

“The death toll will rise as the rescue work has not been completed yet,” Chowdhury said.

“These people — including several journalists who were doing Facebook lives — are still not accounted for.”

“Never in our fire department history have we lost so many firefighters in a single incident,” Bharat Chandra, a former senior firefighter, told AFP.

“There are still some bodies inside the fire-affected places. I saw eight or 10 bodies,” one volunteer told reporters.

Mujibur Rahman, the director of B.M. Container Depot, the firm operating the facility with around 600 workers, said that the cause of the initial fire was still unknown.

“We still could not control the fire because of the existence of this chemical,” he said.

Mohammad Ali, 60, who runs a nearby grocery store, said the blast was deafening.

“A cylinder flew around half a kilometre from the fire spot to our small pond when the explosion occurred,” he told AFP.

“The explosion sent fireballs into the sky. Fireballs were falling like rain. We were so afraid we immediately left our home to find refuge… We thought the fire would spread to our locality as it is very densely populated,” he added.

Lorry driver Tofael Ahmed was standing inside the depot when the explosion occurred.

“The explosion just threw me some 10 metres from where I was standing,” he said. “My hands and legs are burned.”

Chowdhury, the chief doctor in Chittagong, said the injured had been rushed to different hospitals as doctors were brought back from holiday to help.

Requests for blood donations for the injured flooded social media.

The army said it had deployed 250 troops to prevent chemicals flowing into the Indian Ocean by using sandbags.

Mominur Rahman, chief administrator of Chittagong district, said that while the fire was largely under control, there were “still several pockets” that were active.

“Firefighters are trying to control these pockets of fires. The fire has spread to at least seven acres of land inside the depot,” he said.

Fires are common in Bangladesh due to lax enforcement of safety rules.

Around 90 percent of Bangladesh’s roughly 100 billion dollars in trade — including clothes for H&M, Walmart and others — passes through the Chittagong port at the northern end of the Bay of Bengal.

Exports have been booming since late last year, as the global economy recovers from the pandemic. In the first five months of the year, shipments were up more than 40 percent.