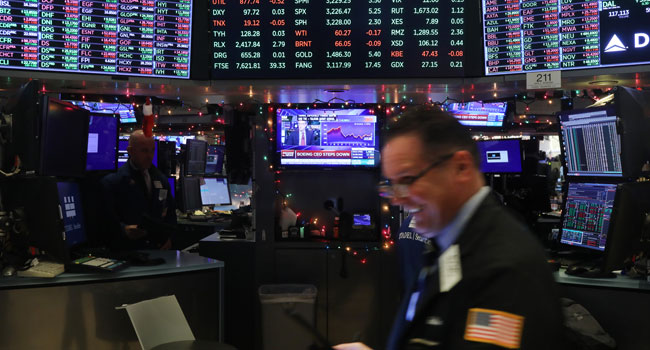 Global stock markets were mostly flat in quiet Christmas Eve trading on Tuesday, running out of fizz before the festive break, although the Nasdaq hit its ninth straight record close.

US investors have been in a cheery mood most of the fall as the outlook for US-China trade talks improved, reducing uncertainty, and most economic reports have been good.

In the sleepy holiday-shortened sessions, the broad S&P 500 slipped a hair, and the benchmark Dow dipped 0.1 percent, but the Nasdaq, with a 0.1 percent gain, posted another all-time high.

It was a similar picture in other major markets, as London’s benchmark FTSE 100 shares index rose 0.1 percent, while the Paris CAC 40 finished flat.

Trading volumes are typically light at this stage with many investors away for extended Christmas and New Year holiday celebrations.

But the sleepy session was punctuated by some big developments.

The documents “appear to point to a very disturbing picture” about Boeing’s response to safety issues regarding the 737 MAX, an aide to the US House Transportation Committee told AFP.

The company sent the documents to the committee late Monday, hours after announcing it had ousted Dennis Muilenburg as chief executive and installed Chairman David Calhoun in the post. Shares had rallied on the leadership change.

Meanwhile, Uber co-founder Travis Kalanick on Tuesday severed his last ties with the ride-hailing giant, announcing he would exit the board of directors at the end of 2019.

Investors were pausing for breath after a bumper run over the last two weeks or so.

“Investors must feel as if they were extra good this year,” said CFRA Research Chief Investment Strategist Sam Stovall, who noted that both stocks and bonds rose solidly in 2019.

Global equities have already enjoyed a “Santa Rally” as dealers welcomed news over the US-China trade war and Brexit, having been on a roller-coaster ride for the last 12 months.

Last week, Johnson clinched parliamentary approval for the nation to depart from the European Union on January 31, dispelling Brexit uncertainty that had plagued markets for more than three years.

The rally gathered pace at widespread investor relief over the China-US trade pact, with the two economic superpowers set to sign off the deal early next month. 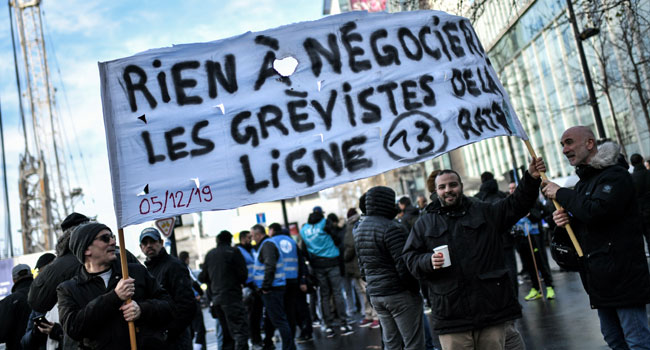 Christmas Day brought no respite for travellers in France as a transport strike entered its fourth week, ruining the plans of thousands to share a traditional meal and quality time with loved ones.

Many scrambled at the last minute to make alternative arrangements as the protest against pension reform saw thousands of trains cancelled or delayed — and taxis, ride-sharing services and car rental agencies unable to make up the shortfall.

Only a fraction of high-speed and inter-city trains ran on Christmas Eve, even fewer on the holiday itself. The main train stations in Paris were closed for the morning with suburban connections slashed and merely two out of 16 metro lines — the only driverless ones — providing any service.

Negotiations between the government and unions last week failed to find common ground, and strikers vowed there would be no holiday truce unless officials scrap plans to merge the current 42 pension schemes into one.

Talks are scheduled to resume on January 7.

The government says the overhaul is needed to create a fairer pension system.

But workers baulk at the inclusion of a so-called pivot age of 64 until which people would have to work to earn a full pension — two years beyond the official retirement age.

‘A moment of grace’

Others, especially railway workers, are angry at plans to do away with special regimes that make early retirement provisions for categories of employees who work unusual hours or do physically demanding jobs.

Paris Opera workers, who can retire at 42, are among those on strike.

On Tuesday, roughly 40 dancers in white tutus staged an elegant protest in Paris, performing Swan Lake to passersby on the steps outside the opera house with banners warning: “Culture in danger”.

“We wanted to offer a moment of grace,” said dancer Alexandre Carniato.

Unions are hoping for a repeat of 1995 when the government backed down on pension reform after three weeks of metro and rail stoppages just before Christmas.

But the action is taking a heavy toll on businesses, especially retailers, hotels and restaurants, during what should be one of the busiest periods of the year.

Industry associations have reported turnover declines of 30 to 60 percent from a year earlier, and the SNCF said Tuesday it had lost 400 million euros ($442 million) in potential earnings so far.

The strikers, too, are losing out, forfeiting their salary for days not worked — 21 days by Wednesday.

On Tuesday, the Info’Com-CGT union presented a cheque for 250,000 euros ($277,000) to striking workers of the RATP Paris rail service, from a fund containing public contributions.

“It is starting to hurt financially. But we have gone too far to stop now.”

The man leading the government’s pension reform project, Laurent Pietraszewski, said Tuesday the government would be “willing to compromise” in the negotiations, set to last throughout January.

But he insisted there will be no revisiting the plan to do away with special retirement regimes.

A poll by the IFOP agency published Sunday showed public backing for the action dropping by three percentage points, though 51 percent of respondents still expressed support or sympathy for the strike, which is set to also cast a pall over New Years’ celebrations and the first working weeks of 2020. 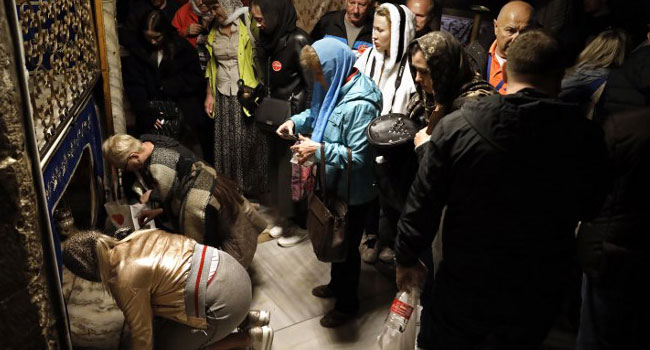 Bethlehem is buzzing, with more tourists expected this Christmas than have visited the Biblical city in years, causing the kind of problem that modern technology was almost born to deal with.

Such are the crowds at the church built on the site where Jesus is believed to have been born that the authorities are planning to introduce an advance reservation system through an app.

The app, which will be introduced early next year, is aimed at ensuring a regular flow of tourists at the Church of the Nativity, where at busy times visitors wait hours to see the underground grotto where Christians believe Jesus was born in a manger.

Details of the app, which will be in English to start, are still being worked out.

One priest said it would only apply to tour groups visiting the site in the Israeli-occupied West Bank, but the Palestinian tourism ministry said it would be for everyone.

While there are concerns visits could become unnecessarily complicated, the three churches that share control of the site — the Catholics, Greek Orthodox and the Armenian Church — say such an app is needed.

“There are times when for us there are specific prayers, celebrations, or masses, or with all the sects praying,” Orthodox priest Issa Thaljieh said outside the church.

“So of course there is a huge squeeze. With the app, everyone will know what time to enter and which groups are there, so it will become more organised.”

The first church was built on the site in the fourth century, though it was replaced after a fire in the sixth century. Its mosaics were recently restored in a major project.

“We are going digital with this issue,” he told AFP in his office in Bethlehem.

– Record year –
Barbora Salyova, a 29-year-old tourist visiting Israel and Jordan from Slovakia, said the app could be useful for pilgrims like herself.

“This is a step we definitely planned to make,” she said. “We also came for religious reasons so this was an automatic stop.”

Tourism in Bethlehem is enjoying its best season in years, with hotels reporting especially high occupancy rates for the Christmas period, said Elias Al-Arja, chairman of the Hotels Association Palestine.

In total around 2.8 million tourists have visited the Palestinian territories this year, up from 2.5 million last year, according to the tourism ministry.

Abu Srour said the primary reason is a decrease in violence in Jerusalem and the West Bank this year.

The ministry has reached out to new tourists in locations across the globe, he said.

Israel is also enjoying record tourism figures and many visitors take day trips to Bethlehem and other West Bank sites from Tel Aviv, Jerusalem and elsewhere in the Jewish state. 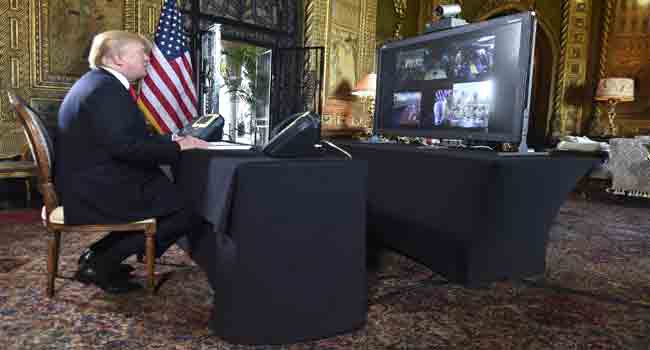 During the conversation Trump thanked the members of the military for their service and their families for the sacrifice.

He went on to describe military families as under-appreciated, calling them the “greatest people on earth.”

Trump has said the phrase “Merry Christmas” will be permitted now that he is president, suggesting it was not used by his predecessors.

MSNBC responded to his statements by putting out a video of President Barack Obama repeatedly saying “Merry Christmas” during his tenure. 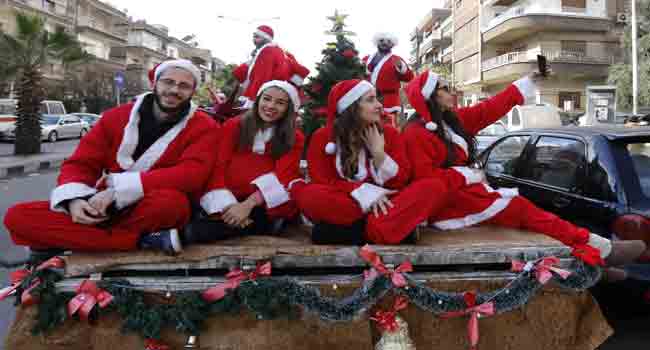 Here are some colourful pictures of Christmas Eve celebration from different nations of the world: