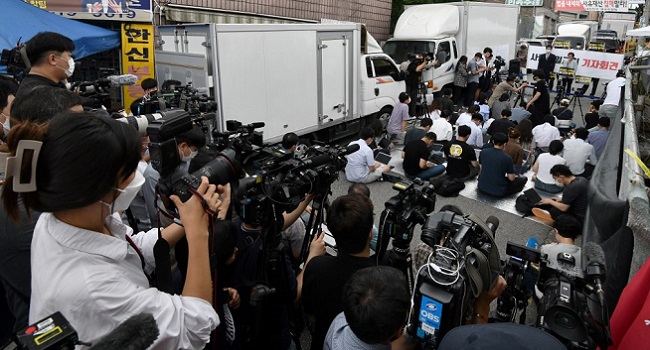 Thousands of members of a Protestant church linked to a coronavirus cluster in Seoul have been asked to quarantine, South Korean authorities said Monday, as they accused the group’s firebrand conservative leader — who has reportedly tested positive — of obstruction.

The country’s “trace, test and treat” approach has been held up as a global model in how to curb the virus, but it is now battling several clusters linked to religious groups.

Over the weekend the capital and neighbouring Gyeonggi province — between them home to nearly half the population — banned all religious gatherings and urged residents to avoid unnecessary travel after a burst of new cases sparked fears of a major second wave.

South Korea reported 197 new infections on Monday, taking its total to 15,515, its fourth consecutive day of triple-digit increases after several weeks with numbers generally in the 30s and 40s.

The largest current cluster is centred on the Sarang Jeil Church in Seoul, headed by Jun Kwang-hun, a controversial conservative pastor who is a leading figure in protests against President Moon Jae-in.

A total of 315 cases linked to the church had been confirmed by the end of the weekend, officials said Monday, making it one of the biggest clusters so far, and around 3,400 members of the congregation had been asked to quarantine.

Around one in six of the church members tested so far had been positive, “requiring rapid testing and isolation,” said vice health minister Kim Gang-lip.

But a list of members provided by the church was “inaccurate”, he said, making the testing and isolation procedure “very difficult”.

The situation amounted to an “early stage of a large-scale outbreak”, said Jung Eun-kyeong, director of the Korea Centers for Disease Control and Prevention.

“If the outbreak is not controlled right now, the number of confirmed cases will increase exponentially, leading to collapse of the medical system and enormous economic damage,” she said.

Sarang Jeil’s leader Jun was among the speakers who addressed thousands of right-wing protestors who rallied against Moon’s centre-left government in the heart of Seoul at the weekend, despite the outbreak and calls to avoid large gatherings.

The health and welfare ministry and the Seoul city authorities have filed two separate police complaints against Jun, accusing him of deliberately hindering efforts to contain the epidemic.

He previously defied a Seoul rally ban to hold an anti-government protest in February, at a time the government was urging everyone to stay at home because of the virus, and was later detained on allegations of separately violating election laws.

The initial coronavirus outbreak in the South was centred on the Shincheonji Church of Jesus, which is often condemned as a cult and was also accused of obstructing investigators.

A lawyer for Sarang Jeil said the church had given authorities details of members going back 15 years, so many former congregants would have been included.

“This nationwide fear is a gimmick to arrest Rev. Jun Kwang-hun,” Kang Yeon-jae told reporters at the church.

The leader of Shincheonji — to which more than 5,000 cases were linked — Lee Man-hee was arrested earlier this month for allegedly giving inaccurate records of church gatherings and false lists of its members to health authorities. 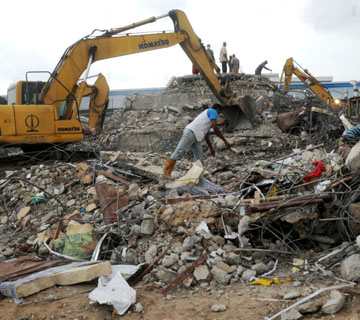 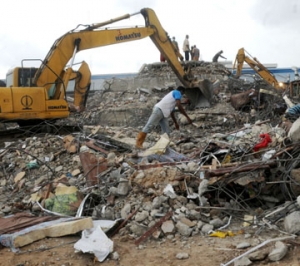 Many anxious relatives are besieging the OR Tambo International Airport, Johannesburg, hoping to see their loved ones return safely from Lagos after the Synagogue church building collapse last Friday.

However, for some it is a very frustrating wait as they complain that they are not getting any information about what has happened to them.

Channels Television Correspondent in South Africa, who was at the airport in Johannesburg early Thursday morning, spoke to some relatives who complained bitterly.

A team of Rescue Response experts from South Africa have joined the Nigerian Government efforts to manage the crisis.

SA officials say 67 South Africans died in the incident and many still unaccounted for.

Meanwhile, back in Nigeria, rescue operation at the site of the collapsed 6-storey guest house belonging to the Synagogue Church of All Nations has ended on Thursday.

A combined team of the National and the Lagos State Emergency Management Agency told journalists that there was no more trace of dead victims.

They revealed that the second phase of data collation and identification of victims has commenced.

The total final death figures released by the agencies is put at 80 with 131 survivors.

South African President, Jacob Zuma , said at least 67 South Africans died in the Friday’s accident at the Synagogue Church of All Nations in Lagos and has described it as one of the worst tragedies in South Africa’s recent history.

The collapse occurred when three extra storeys were being added to the existing two of a guest house in the church compound.

Led by the charismatic Prophet T.B. Joshua, the pentecostal church attracts a global following of Christians who believe Joshua is able to perform miracles including curing the ill and raising the dead. 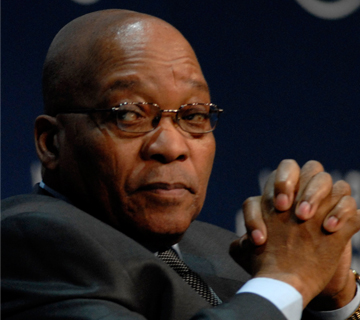 I am greatly saddened to announce that 67 South Africans died and scores of others sustained injuries, after a building at the Synagogue Church of All Nations collapsed on Friday, 12 September 2014, in Lagos, in the Federal Republic of Nigeria.

This is a particularly difficult time for South Africa. Not in the recent history of our country have we had this large number of our people die in one incident outside the country.

As we mourn this sudden and tragic death of our fellow compatriots, I have directed the relevant Government departments and entities to act with the utmost urgency to ensure that we facilitate the movement of relevant family members to Nigeria to identify the bodies of their loved ones and to ensure that we repatriate the remains as soon as possible under the circumstances.

I would like to take this opportunity also to thank all family members and friends who have provided information to Government, which information has assisted the South African High Commission in Nigeria in its efforts to locate our fellow citizens.

I would also like to commend all affected families for their patience and resolve during this very painful period.

I would like to assure all affected families that the Government will provide all the necessary support.

Government will keep the public informed of developments around this tragedy.

May the souls of the departed compatriots rest in peace.

Issued by: the Presidency 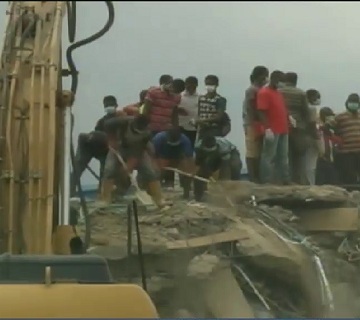 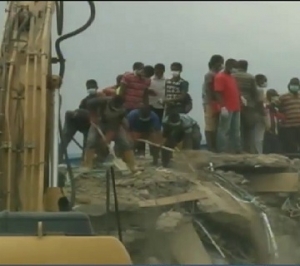 The death toll of the collapsed building in the premises of the Synagogue Church of All Nations in Lagos has risen to 60, as a 45 year old woman was rescued alive from the debris after four days.

Information provided by the National Emergency Management Agency (NEMA) showed that 131 persons have been rescued from the rubble.

The woman, whose nationality has not been revealed, was found alive at about 2:00am with only minor injuries.

Meanwhile, the standard organisation of Nigeria has begun investigation into the materials used for the construction of the building, with iron rods and sand stones collected for laboratory test.

Earlier report had put the death toll at 45.

The building which was under construction before it collapsed on Friday afternoon, was also being used as a guest house for church members and visitors, especially foreigners.

As at the time of the collapse, people were living in the building.