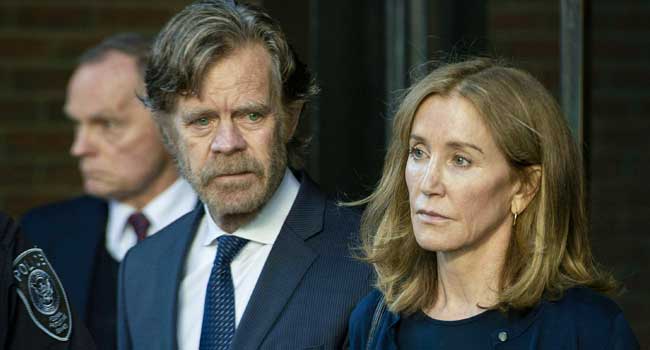 Actress Felicity Huffman on Tuesday began serving a two-week prison term for her role in a college admissions scam in which she paid a bribe to help her daughter gain admission to a prestigious university.

The “Desperate Housewives” star turned herself in at the low-security Federal Correctional Institution in Dublin, about 35 miles (55 kilometers) east of San Francisco, in the early morning.

“Ms. Huffman is prepared to serve the term of imprisonment Judge (Indira) Talwani ordered as one part of the punishment she imposed for Ms. Huffman’s actions,” a representative for the 56-year-old actress said in a statement to AFP.

“She will begin serving the remainder of the sentence Judge Talwani imposed — one year of supervised release, with conditions including 250 hours of community service — when she is released.”

The Oscar nominee, who is married to actor William H. Macy, was the first of more than 30 parents sentenced in an elaborate and wide-ranging scam to help children of the elite secure places in top US colleges.

Huffman, who was also fined $30,000, pleaded guilty in May during a tearful court appearance to paying $15,000 to boost her daughter’s SAT college entrance exam score.

The scandal erupted in March when the ringleader behind the scam, William “Rick” Singer, admitted running the elaborate fraud which ranged from cheating in entrance exams to bribing coaches to help non-athletic students get scholarships.

Authorities say he was paid about $25 million to bribe coaches and university administrators. He has pleaded guilty and is cooperating with authorities.

In a statement read in court at her sentencing last month, the actress apologized to students and parents.

“I broke the law. There are no excuses or justifications for my actions. Period,” she said.

“My hope now is that my family, my friends and my community will forgive me for my actions,” Huffman added.

Actress Lori Loughlin from 1980s-90s sitcom “Full House” and her husband are facing similar charges. The pair have pleaded not guilty and are awaiting trial. 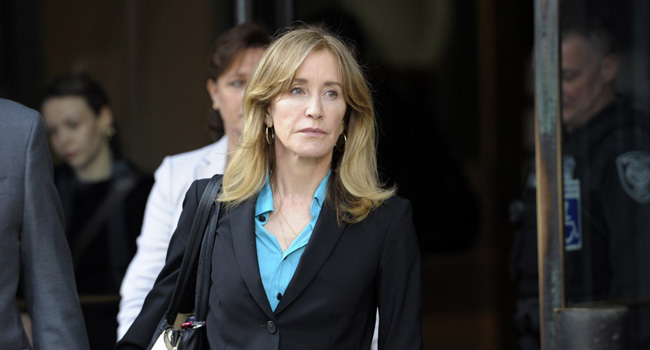 Actress Felicity Huffman and a dozen other parents agreed on Monday to plead guilty to using bribery to get their children into prestigious universities.

Huffman, 56, best known for her role in the “Desperate Housewives” series, agreed to plead guilty to paying $15,000 to help her eldest daughter get better scores on the SAT college entrance exam, the Massachusetts Department of Justice said in a statement.

The Massachusetts Department of Justice said that in addition to Huffman, another dozen parents charged in the case had also agreed to plead guilty.

Huffman could face a maximum of up to 20 years in prison for conspiracy to commit mail fraud but is not expected to receive such a stiff sentence.

The Boston Globe said that as part of a plea agreement, Huffman’s sentencing guidelines would be between four to 10 months in prison and prosecutors would recommend she serve the “low end” of that scale.

The newspaper also published a statement from Huffman in which she apologized for her actions.

“I am ashamed of the pain I have caused my daughter, my family, my friends, my colleagues and the educational community,” she said.

“My daughter knew absolutely nothing about my actions, and in my misguided and profoundly wrong way, I have betrayed her,” Huffman said. “My desire to help my daughter is no excuse to break the law or engage in dishonesty.”

Another television actress, Lori Loughlin, known for her role on “Full House,” has also been charged in the case but did not enter a plea on Monday.

Loughlin and her husband are accused of paying $500,000 in 2016 and 2017 so that their two daughters could gain entrance into the University of Southern California by posing as members of the rowing team.

The actresses were the most famous of the 50 people indicted in a scam to help children of the American elite gain entry into top US colleges.

Some of the other parents involved were CEOs or partners in major law firms.

Some of them paid as much as $400,000 to get their child into the college of their choice.

The ringleader behind the scam, William “Rick” Singer, who authorities say was paid about $25 million dollars to bribe coaches and university administrators, has pleaded guilty and is cooperating with authorities.

Besides USC, some of the universities targeted in the elaborate cheating scam include Yale, Stanford, UCLA and Georgetown. None of the schools or the students have been charged in the case.

According to prosecutors, the accused parents paid a firm run by Singer to cheat on college entrance exams for their children or to bribe coaches to help non-athletic students get scholarships.