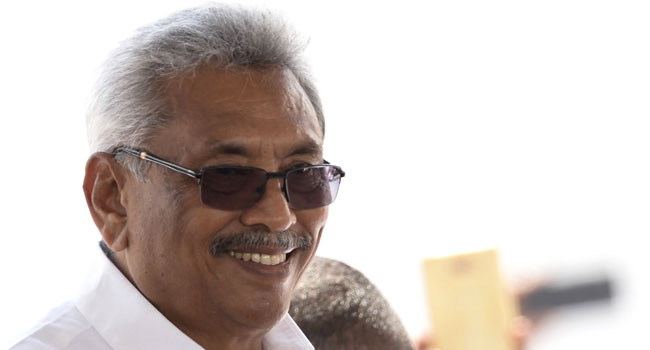 Beleaguered President Gotabaya Rajapaksa was set to name a new prime minister Thursday to try to steer Sri Lanka out of its dire economic crisis after days of violence, officials said.

Respected five-time former premier Ranil Wickremesinghe was the frontrunner to head a “unity government” with cross-party support in the 225-member parliament and replace Rajapaksa’s elder brother Mahinda who stepped down on Monday.

“A swearing-in is likely today unless there is a last-minute hiccup,” a senior official close to the president told AFP.

In a televised address to the nation on Wednesday night, Rajapaksa stopped short of yielding to weeks of nationwide protests calling for him to resign.

The country of 22 million people is in its worst economic crisis since independence with severe shortages of food, fuel, and medicines and long power cuts.

But in a bid to win over the opposition who wanted Rajapaksa to quit, the 72-year-old pledged to give up most of his executive powers and set up a new cabinet this week.

“I will name a prime minister who will command a majority in parliament and the confidence of the people,” Rajapaksa said in the televised speech.

Mahinda Rajapaksa resigned as prime minister on Monday after his supporters attacked anti-government supporters and ran riot in Colombo.

This unleashed several days of violence that killed at least nine people and injured more than 200, with dozens of Rajapaksa loyalist homes set on fire.

Security forces patrolling in armoured personnel carriers with orders to shoot on sight anyone engaged in looting or violence have since cracked down on public disorder.

A curfew was lifted Thursday morning only to be reimposed after a six-hour break allowing people to stock up on essentials.

The main opposition SJB party was initially invited to lead a new government, but its leader Sajith Premadasa insisted that the president first step down.

However, about a dozen MPs from the SJB pledged support to Wickremesinghe, 73, who has been prime minister five times since 1993 and is seen as a pro-West free-market reformist.

Wickremesinghe is the only legislator from his United National Party (UNP) which was routed at the August 2020 election that gave Rajapaksa a two-thirds majority.

With the economic crisis, the Rajapaksa government began to unravel with mass defections to the opposition, but since April no group in the 225-member assembly enjoys an absolute majority.

Sri Lanka is in talks with the International Monetary Fund and others about a bailout package after a shortage of foreign currency forced it to default on its foreign debts last month.

The island nation’s central bank chief warned Wednesday that the economy will “collapse” unless a new government was urgently appointed. 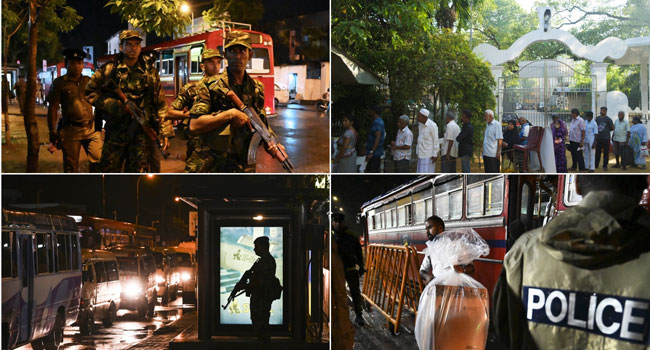 Minority Tamils and Muslims are seen as crucial in the close election, and the attack in the northwest of the island — in which no one was injured — was likely aimed at deterring people from heading to the polls.

But election chief Mahinda Deshapriya said over 80 percent of the 15.99 million electorate was estimated to have turned out Saturday, compared to 81.5 percent at the previous presidential poll in 2015.

“Comparatively this is the most peaceful presidential election we have had in this country,” Deshapriya told reporters at the end of the 10-hour voting period.

However, two women voters were injured when unidentified attackers pelted stones at their bus in the northwest region of Medawachchiya, police said.

The victims were travelling in a convoy of busses which had come under gunfire in the same region earlier in the day.

In the first attack, assailants burned tyres on the road and set up makeshift roadblocks before shooting at and pelting with stones two busses in a convoy of more than 100.

In the Tamil-dominated northern peninsula of Jaffna, meanwhile, police said they arrested 10 men they suspected of “trying to create trouble”, while also complaining that the army had illegally set up roadblocks that could stop people getting to polling stations.

Such tactics are nothing new in Sri Lanka, which emerged from a horrific civil war only a decade ago. At the 2015 election, there was a series of explosions in the north.

Supporters from rival parties meanwhile clashed in a tea plantation area 90 kilometres (55 miles) east of the capital Colombo, with two people taken to hospital with cuts, the election commission said.

Some 85,000 police were on duty for the election with a record 35 candidates running for president, an office with considerable power similar to the French political system.

Results could come as early as midday (0630 GMT) on Sunday if there is a clear winner, but Deshapriya said floods in three out of the 22 electoral districts had disrupted counting and warned of delays in releasing the final tallies.

One of the two frontrunners is grey-haired retired army lieutenant colonel Gotabaya Rajapaksa, 70, younger brother to the charismatic but controversial Mahinda Rajapaksa, president from 2005-15.

Dubbed the “Terminator” by his own family, “Gota” is promising an infrastructure blitz and better security in the wake of the Islamist attacks in April that killed 269 people.

“Gotabaya will protect our country,” construction worker Wasantha Samarajjeew, 51, said as he cast his ballot in Colombo.

He is also pushing development and security as well as free sanitary pads for poor women, earning him the nickname “Padman” after a famous Bollywood movie.

The Rajapaksas are adored by Sri Lanka’s Sinhalese majority for defeating Tamil Tiger separatists and ending a 37-year civil war in 2009.

They are detested and feared by many Tamils, who make up 15 percent of the population. The conflict ended with some 40,000 Tamil civilians allegedly killed by the army.

During Mahinda Rajapaksa’s presidency, Gotabaya was defence secretary and effectively ran the security forces, even allegedly overseeing “death squads” that bumped off political rivals, journalists and others.

He denies the allegations.

What also concerns Western countries, as well as India, is that strategically located Sri Lanka moved closer to China under Mahinda Rajapaksa, even allowing two Chinese submarines to dock in Colombo in 2014.

Under its Belt and Road Initiative spanning Asia and beyond, China loaned and granted Sri Lanka billions of dollars for infrastructure projects, many of which turned into white elephants and became mired in corruption allegations.

Western capitals “should give a fair chance to us”, Basil Rajapaksa, another brother, told reporters. “They can’t be monitors of this country. They must be partners.” 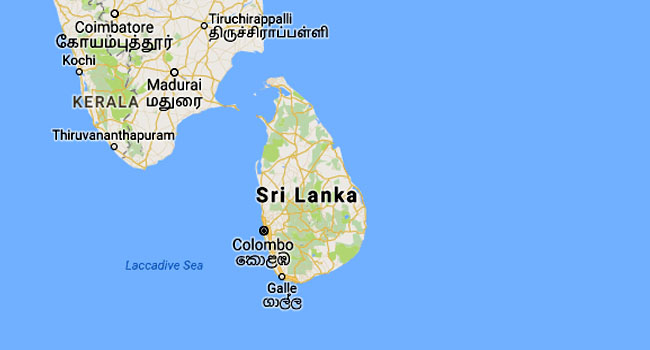 Around 10,000 people, some of whom were seriously ill, had gathered at a school to listen to a man who claimed he could use “powers of the gods and the Buddha” to cure the sick.

Police in the town of Horowupotana, 260 kilometres (162 miles) north-east of Colombo said 18 people were taken to hospital, with 13 in a critical condition.

Officials at the local hospital said the two who died suffered heat exhaustion while others were treated for dehydration. Temperatures have soared to about 37 degrees Celsius (98.6 degrees Fahrenheit) in the area this weekend.

The faith healer, Deegoda Kumara, used his YouTube channel to deny he had caused the deaths and accused local media of causing unrest by spreading mistrust about his work.

In one video, Kumara claimed to have revived a road accident victim who had been in a coma in a Californian hospital. He said he blessed the victim after speaking to her relatives on the phone. 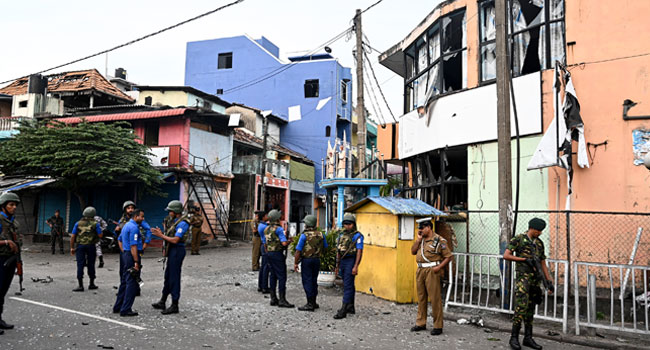 Police on Monday said they had found 87 bomb detonators at a Colombo bus station, a day after a string of attacks on churches and hotels that killed nearly 300 people.

A statement said police found the detonators at the Bastian Mawatha Private bus stand, 12 of them scattered on the ground and another 75 in a garbage dump nearby.

There was no immediate information on injuries in the blast, or how large it was. The explosion happened around 50 metres from the St Anthony’s Shrine, one of three churches targeted in a string of suicide bombs on Sunday that killed nearly 300 people.

Government spokesman Rajitha Senaratne said investigators were looking at whether the National Thowheeth Jama’ath (NTJ) group had “international support” for the deadly Easter Sunday attacks on churches and luxury hotels.

Wary of stirring ethnic and religious tensions, officials have provided few details about 24 people arrested since the attacks.

Not much is known about the NTJ, but documents seen by AFP show Sri Lanka’s police chief issued a warning on April 11, saying a “foreign intelligence agency” had reported the group was planning attacks on churches and the Indian high commission.

The group has previously been linked to the vandalising of Buddhist statues.

“We don’t see that only a small organisation in this country can do all that,” said Senaratne.