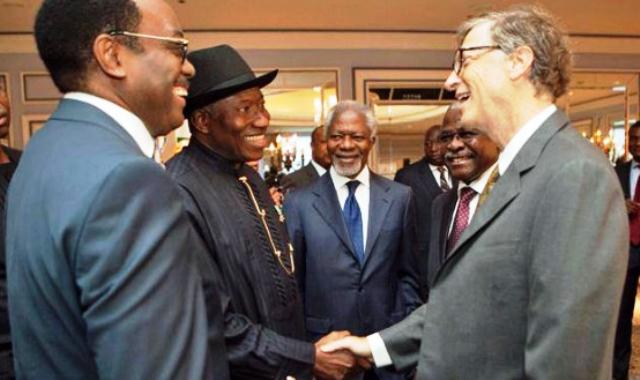 President Goodluck Jonathan on Monday, November 11, attended a forum organised by the Presidential Taskforce on Polio Eradication in company of American Inventor and Philanthropist, Bill Gates.

While speaking at the event which also had Nigerian Businessman, Aliko Dangote in attendance, President Jonathan restated the Federal Government’s commitment to ensuring that Polio is eradicated in Nigeria.

He also called on politicians across the country to ensure that political activities towards the 2015 General Elections do not affect the Government’s agenda to eradicate the wide polio virus in the country by 2014.

Mr. Bill Gates in his speech commended President Jonathan’s efforts at eradicating Polio in Nigeria, as his presence at the event to support the Presidential Task Force is an indication of his commitment to the cause. He also offered suggestions on how to make the initiative succeed.

The high point of the forum was the conferment of a National Honour of the Commander of the Federal Republic on the Co-Chairman of the Bill and Melinda Gates Foundation, Mr. Bill Gates, for his contribution to polio eradication in Nigeria.