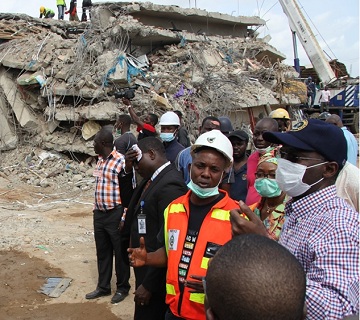 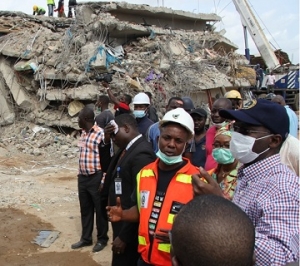 The Lagos State Governor, Mr Babatunde Fashola, on Sunday visited the site of the collapsed building at the Synagogue Church of All Nations, Ikotun Egbe, expressing sadness at the loss of life.

He further described the incident as very unfortunate, as findings showed the building may not have approved plan.

While commiserating with the General Overseer of the Church, Prophet Temitope Joshua, who came to meet him at the site of the collapsed structure, Governor Fashola, however, directed that the staff of the Church should give way for the rescue workers to be able to carry out the job of evacuating the debris and rescuing possible victims still trapped under the collapsed building.

The Governor, who was received at the site by the Commissioner for Physical Planning and Urban Development, Town Planner Olutoyin Ayinde, told Prophet Joshua that the presence of the church members was hampering rescue operations.

“What you need to understand now is that this place is now an accident scene and so all your staff must leave this place. We need to take control of this place and let people who are trained to do this job to do so. 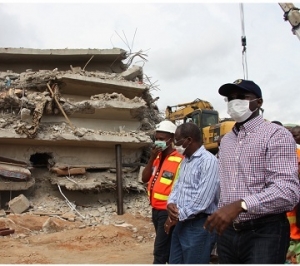 “We understand that this is an unfortunate incident, we understand their sense of sympathy and compassion. But let them allow those who are trained to do the job take over and do the job; that is their training and it won’t make sense if they are getting in each other’s way,” he said.

The Governor further explained that after the emergency workers had finished their work, it would be easier for any staff of the Church, whether an engineer or a medical personnel, whom the General Overseer wishes to be on the site with the emergency workers for the purpose of taking records, to join them.

“When we finish, if you have any person, whether an engineer or a medical person you wants to be on the site with them, working with them to know what they are taking there, then it is easier; they can report to you and then report to me. But we can’t continue rescue operations with your men hanging around here,” Governor Fashola told Prophet Joshua.

Also at the site to receive the Governor were the Commissioner for Special Duties, Dr. Wale Ahmed and the General Manager, Lagos State Building Control Agency, (LABSCA), Mrs Kafayat Animashaun-Odunayo among other top government officials. 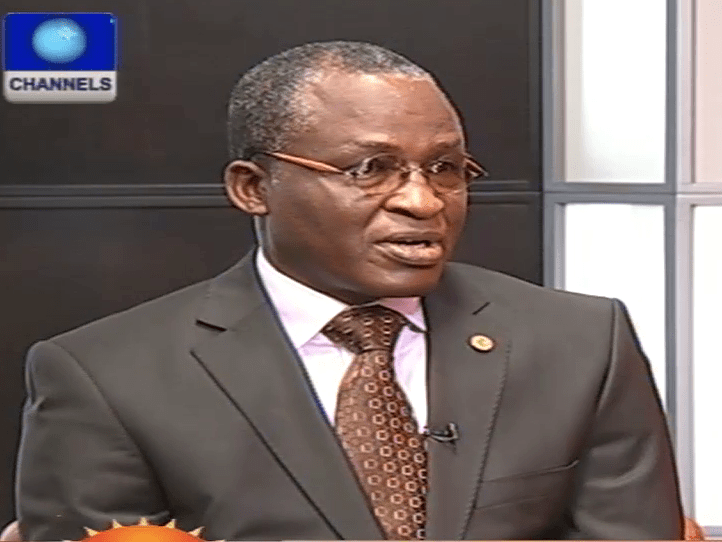 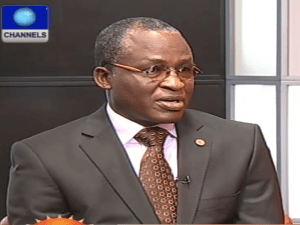 The Commissioner for Physical Planning and Urban Development in Lagos State, Toyin Ayinde on Tuesday said that several housing projects the State was working on were not “low cost housing estates” as they had been labelled, emphasising that the houses were going to be affordable to the citizens.

Ayinde, who was a guest on Sunrise Daily, on Tuesday, said: “Lagos State hasn’t published that it is developing low cost housing, because indeed there is no low cost cement, there is no low cost iron rod, there are no low cost building materials, therefore, what we have said is that we are embarking on affordable housing.”

The houses, which are located in different areas of the State, cost between 3.5 million Naira and 15 million Naira. However, the commissioner described the houses as affordable, explaining that buyers would be able “to access a mortgage system that runs on an interest rate that has never been presented to stakeholders before.”

He also explained that the cost of building the houses would determine the purchase price.

On the Ilubirin project, Ayinde said actual construction was yet to commence on the site, disclosing that the project which would have houses of 7 floors, was yet to have a price.

There had been complains about the location of the project which is close to a high tension cable, but the commissioner said that the required setback had been adhered to and that those who had concluded that the State government was building under such a cable were being mischievous.

“For that grade of high tension cable, it’s a 46 meters corridor… that has been factored into the project,” he said.

He further explained that the estate was 2.5 meters above sea level and would not contribute to flood issues. “It was sand-filled before I got to government in July 2011 so whoever is saying it will contribute to flooding is not saying the truth,” he said.

On the latest building collapse in Oworonshoki area of Lagos, the Commissioner explained that it was due to bad construction. He noted that the agency had initially sealed off the site but the contractors had broken the seal to continue working.