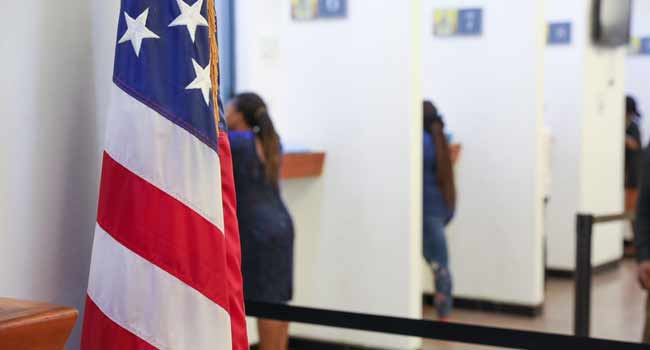 The United States Embassy in Nigeria has reacted to the outcry over the rate at which applicants are being denied visa in the country.

In separate posts on its Twitter and Facebook handles on Monday, the embassy explained that it consular officers do not gain anything by denying those seeking to travel to the US visa.

It, however, appealed to Nigerians to join its visa officers live on Facebook on Wednesday to know why they were denied visa as a result of “commonly misunderstood questions” in the course of their applications.

The Twitter post read, “Contrary to popular opinion, Consular Officers do not enjoy refusing anyone a visa. Proof: Join us on Facebook for demonstrations on how to complete the DS 160 correctly.  April 17 | 2:00pm #AskTheConsul.”

The Facebook post also read “Contrary to popular opinion, Visa Officers do not enjoy handing anyone the 214b refusal letter. Proof: Visa Officers will be live on Facebook to talk about some of the commonly misunderstood questions on the DS 160 and help you improve your next application.

But the explanation by the embassy has triggered various reactions from visa applicants on both Twitter and Facebook.

Most of them criticised the embassy and narrated their experience when they went for an interview.

Read some tweets below:

Dear Sir/Ma, I successfully completed the DS160 form. Was invited by UN in New York. I have a good job(been working for 10years) and good travel history. The consular asked me if am married, I said No. He said I do not qualify for a Visa.

I went for interview few days ago, after an hour of waiting and over 200 plus applicants , only 5 applicants visa was granted , mine also was refused and my propose of applying if because I want to attend a year program at @NYFA. So I believe the consular enjoy refusing a visa

Lol hahaha I hope this is some sort of joke right now. Lmao

After using our visa fee to drink coffee, the next action is to be dishing out blue paper with passion. U see smiles on their faces. Just a question & that’s why don’t u state reasons for visa denial,instead,u keep referring someone to the blue generic paper u gladly dish out?

…whaaat!…so what’s that smile on their faces?…

I don’t trust ur https://t.co/SWnj6yEwoc consular intentionally deny Nigerian Visa.And its going out of hand.Out of 100 Nigerians that apply they will only give 5-10…….making others to loose their precious 65k.

Adaobi Emmanuella Njoku Contrary to what you just posted, I think and believe they actually do enjoy it because they act like they know it all and still end up giving visas to people without genuine intentions.
I can’t wait for Wednesday to come because I have already prepared my questions down. They will explain to me how it is possible to deny one visa three times with three different reasons at different times when the form was filled exactly the same and for the same purpose. For a medical trip to help save ones child. I can’t wait for Wednesday.

Kelechi Okoh I have a great job, my husband, 2 kids, properties you still denied me visa for child birth because I do not have strong ties. Really!
I can never leave my family for anything. Am alive and keep working because of them.
I was shocked at the consular officer. She did not even look at any of my documents.

Adebayo Lastborn Adebola Even when you answer all questions, they will still deny you visa

Ogbeni Samuel Adeleke Adejimi Thanks for giving us the opportunity to ask questions relating to common mistakes that led to visa denial based on DS 160 form.
I’ve had 5 different experience.
Will surely join the consular officer by 2pm on Wednesday to ask my questions.

Akufai Valentine Jonah Had a terrible experience in 2013. I got scholarship to attend a conference in Denver but was denied visa. I was not angry because i was denied visa, I was angry in the manner of the disrespect from the consular officer. Imagine giving one that refusal letter and you are told off you go without any tangible explanation, after reading the letter, it states that i don’t have strong ties to my country either through being married, niether do i have a job and back then i use to work with an NGO and it was clearly stated in my application, i have forgotten the third excuse. I just laughed and left, I know people who are single then and are still single today that have gotten US visa, i know people who have no job but have gotten US visa, i know people who had zero travel experience but yet were granted US visa. Since that episode i have never ever applied for a U S visa because i don’t have any business there for now. Me, I would never get marry because i want to secure a US visa, Who sets the rule on what is “Strong ties”? Just a way to allow someone play “God”. For me, you get US visa base on which side of the bed the consular officer interviewing you wakes up from.

Eunice Erusiafe My son was denied 3 times without any reason, he is going 4 a open heart surgery,(congenital heart defect )d boy is going tru a lot of pains right now I pray God sends help 2 us.

Ufoeze Oge Uc To think I stood before a staff and the first thing he asked me was What does your husband do? I answered “Sir am not married” the next thing I heard was sorry ma you are not qualified for this visa. So it’s now a must to be married.

When people are sincere they are denied, I can’t lie because I want to go to another man’s land. Anyway na me find them go.
Till Wednesday afternoon.

Bayo Akintunde #AskTheConsul This will be a very interesting session. To understand what drives visa officers decisions despite glaring evidences.

Adebiyi Oduyoye You should return the visa fee when you deny an applicant.

Mustapha Afinni I don’t need your visa even, if it’s free”

Kuti Oluwafuntan Abiola In a situation whr ds-160 was filled correctly buh b4 u answered the question bn asked by d consular,d refusal form is already in her hand…

Zanni Waherb Why not return the visa Fee after denying an applicant instead you chop d money and tell them to apply again😏😏😏like you did for me 2yrs ago.