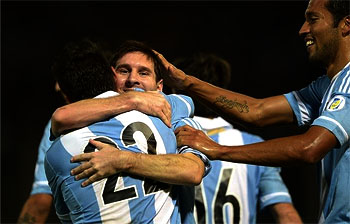 Lionel Messi guided Argentina past a tough Uruguay side in the final half hour with two brilliant goals for a 3-0 win on Friday that keeps them top of South America’s World Cup qualifiers.

Argentina leads the nine-nation South American group with 17 points from eight matches at the halfway stage. Colombia and Ecuador are one point behind, Uruguay and Chile five behind.

Messi created and finished his first goal in the 66th minute, playing the ball to Angel Di Maria and racing through to tap the rebound past Fernando Muslera.

Argentina went two up nine minutes later with another move on the left, Messi again feeding Di Maria who returned the ball with his first touch where Sergio Aguero touched it into the net.

The third goal in the 80th minute came from a cheeky free kick by Messi, who deceived the Uruguay wall by sliding the ball underneath them and inside the base of the near post when they jumped expecting a shot to one of the upper corners.

It was sweet revenge for Messi, who has now scored 12 goals in his last seven internationals, and Argentina after they were eliminated by Uruguay on penalties in the 2011 Copa America and which the 2010 World Cup semi-finalists went on to win

Argentina’s Coach Alejandro Sabella couldn’t hide his excitement as he admitted it was a “Great match by the players against an experienced team like Uruguay who for a good reason finished fourth at the recent World Cup.”

Argentina enjoyed far more possession and territory than Uruguay in the first half but could not find a way through a well organised defence and when they did, they were caught offside.

Uruguay was a latent threat on the counter-attack with forwards of the calibre of Edinson Cavani, Luis Suarez and Diego Forlan.

Messi created a good chance for himself with a dribbling run past several defenders towards the end of the first half in Mendoza but his final, left-footed shot went over the top and hit the far stanchion.

He was also close with a free kick from the left which would have gone in if Muslera had not punched the ball over.

There was fighting among players from both sides early in the second half when Uruguay captain Diego Lugano chased a loose ball with Sergio Romero and stamped on the Argentina goalkeeper’s hand as he went for it, earning a booking.

Messi’s first goal came during a spell of total Argentine dominance but soon after there was a scare for Argentina with defender Pablo Zabaleta clearing off the line.

It was an expensive outing for the Uruguayans with Lugano, who came off injured, and fellow central defender Diego Godin suspended for Tuesday’s visit to Bolivia after both were booked.