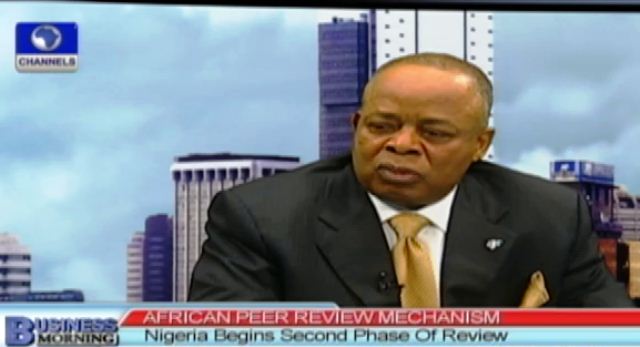 Former Senate President, Ken Nnamani has said that Nigeria seems to have made a lot of progress in the area of its electoral process, if past and recent elections held in the country are compared.

He said this while appearing as a guest on Channels Television’s Business Morning, in his capacity as the Chairman, National Steering Committee on Nigeria’s Second Peer Review.

Also on the programme was a resource person for the National Steering Committee, Professor Adele Jinadu who shed more light on the concept of the African Peer Review Mechanism (APRM) and its activities in Nigeria.

He described the African Peer Review Mechanism (APRM) as Africa’s innovative thinking of governance, and the idea is to move Africa forward, against the background of what happened in the 1960s to the 1980s with authoritarian rule, political centralization, and to help build governance and development on a new concept of partnership in which the people themselves will own the development process.

He said “the idea is to set benchmarks and to monitor progress towards the benchmarks, to identify weaknesses and strengths and to see how we can move Africa together. The monitoring and assessment is done in 4 areas; Democracy and Political Governance, Economic Management and Governance, Corporate Governance, and Socio-Economic Development.”

Nigeria had its first review in 2008 with few issues highlighted and since then there have been periodic reports submitted by the Government to the APRM Forum of Heads of State and Governments every 6 months. The idea, according to Adele, is to see the progress being made towards the recommendation that were made in the country’s review and report.

Explaining Nigeria’s 2008 review, Prof Adele said some strengths were identified in the governance and development process of the country, like its role in Africa in terms of peacekeeping, Federal Character clauses, management of diversity as well as Nollywood as an innovation to its credit. The election was a major weakness identified in the 2008 review.

Senator Nnamani however highlighted the progress made so far since the 2008 review on the country’s electoral process.

“Take for instance 2007 General Elections; it was adjudged the worst in our history but subsequently with the current administration and the concept of ‘one person one vote’, it appears to me that people are now beginning to enjoy casting their ballot knowing that it will count.”

“In other words, our country is now beginning to use ballots instead of bullets and I hope that continues.”

He agreed that the country has not done well in other areas, particularly in controlling corruption, which has a more negative effect on the economy.

Responding to questions on the committee’s capacity to drive the outcomes of the Peer Review and stimulate response to its recommendations, Senator Nnamani stated that the structure of the National Steering Committee for the Peer Review itself will ensure this with its members from different sectors of the economy. He added that the encompassing yet non-political makeup of the committee gives it the enabling environment to inspire development in the country.

He added that having an opportunity to oversee a process of self-assessment with eminent leaders from other African countries coming to verify requires that “we know those weak areas, particularly since we are talking about democracy.”

Senator Nnamani also mentioned insecurity and corruption among the issues that will be looked into by the Peer Review.