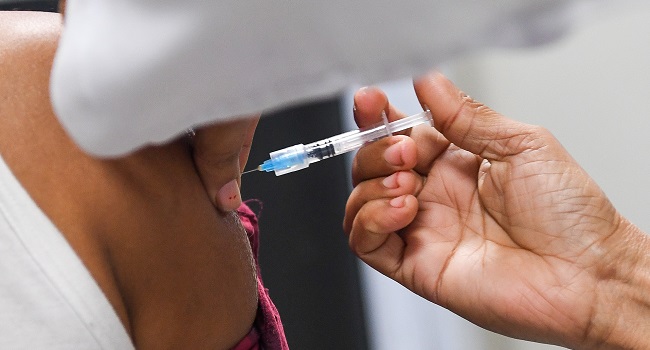 Panama’s health minister on Monday defended the deployment of more than 200 Cuban doctors to help the Central American country battle the coronavirus, despite criticism of the island government’s human rights record at home.

“We are eternally grateful” to the Cuban doctors because “they came here to save the lives of Panamanians,” Luis Francisco Sucre said during an appearance before the National Assembly to answer questions about the management of the pandemic.

Several deputies criticized the Panamanian government’s decision to hire the 220 Cuban doctors, calling it “a violation of human rights.”

But Sucre defended the agreement between his ministry and its Cuban counterpart, which he said “complies with all due legal processes.”

He said his government would not hesitate to “sign it again.”

“The same people who today criticize the agreement signed with the Cuban Health Ministry would have been criticizing if there were dead in the streets, or if people were dying in the corridors of hospitals because we had no doctors to treat them,” Sucre said.

The Cubans arrived in Panama on December 24, at a time when Panama was facing a crisis that had completely overwhelmed its health system and exhausted local doctors.

The decision to bring Cuban doctors produced controversy in some sectors because in Panama, medical practice is restricted to local professionals.

The announcement also met with resistance from Washington.

“Governments that hire Cuban medical workers must ensure their fair and humane treatment — in tark contrast to the Castro regime, which traffics in, and exploits, the workers’ bravery for its own gains,” tweeted Michael Kozak, Washington’s acting assistant secretary for Western Hemisphere Affairs.

Washington and some human rights organizations consider the sale of Cuban medical services a form of “forced labor” that “violates human rights” and only serves as propaganda for the Communist government of the island.

During his speech, Sucre said that in addition to Cuba, the Panamanian government also requested medical support from other countries, such as the United States, Costa Rica, Colombia, Venezuela, Italy, Israel, China and Russia, but had been unsuccessful.

“The criticisms are easy, the difficult thing is to be here directing a pandemic that nobody asked for,” Sucre said. 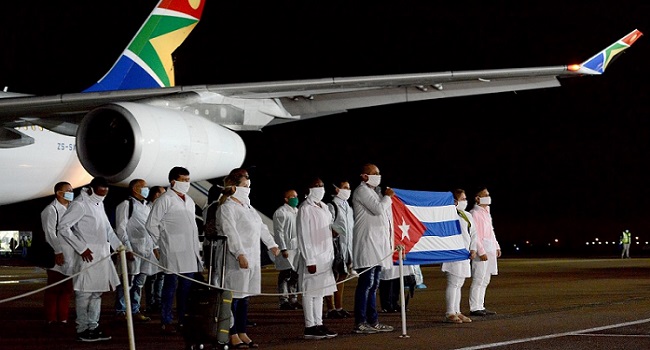 More than 200 Cuban doctors and health workers arrived in South Africa on Monday to help the fight against coronavirus, the presidency said.

South Africa has the highest number of coronavirus cases on the continent with 4,546 infections, of which 87 have been fatal.

The delegation was met by a group of South African ministers as they landed in the early hours of the morning.

“217 Cuban health specialists and workers have arrived in South Africa today… to assist with the fight to curb the spread of the COVID-19 pandemic,” the presidency said in a statement.

They include epidemiology and public health experts, family physicians and healthcare technology engineers.

South Africa is in the final days of a strict nationwide lockdown that will be gradually eased from May 1.

The Cuban family physicians will help with a mass door-to-door screening and testing campaign launched at the beginning of April.

Over 168,000 people have been tested so far, including more than 13,500 in South Africa’s most populous province Gauteng where the majority of cases have been recorded.

South Africa is the second country in the region to receive medical support from Cuba.

More than 250 Cuban doctors were sent to Angola earlier this month to help authorities combat the spread of COVID-19. Angola has recorded 25 coronavirus cases, including 2 deaths. 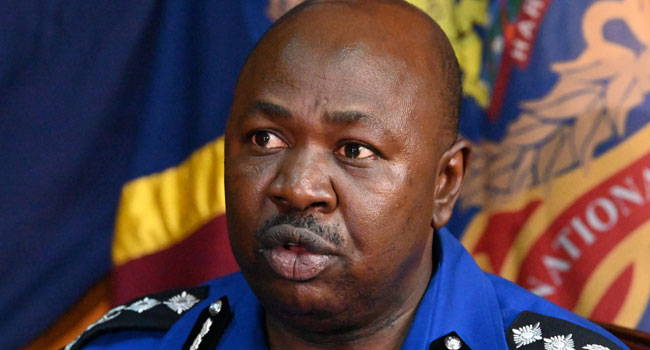 The operation happened as the two doctors — a general practitioner and a surgeon — were on the way to work in the town of Mandera, close to the border with Somalia.

“Today at around 9:00 am, suspected Al-Shabaab militants abducted the two Cuban doctors stationed at the Mandera County Referral Hospital,” the county’s governor, Ali Roba said in a statement.

Kenyan police spokesman Charles Owino said the assailants used two Toyota Probox cars to block the vehicle that the doctors were travelling in.

One of the two police officers escorting them “was shot by the attackers and died on the spot. The attackers succeeded to abduct the two doctors and crossed the border with them,” said Owino.

The driver of the doctors’ vehicle was arrested “and is currently being interrogated,” he said.

“Our security officers are pursuing the attackers.”

A senior police officer, who asked not to be named, told AFP:  “From the modus operandi and the fact that they went towards the Somalia border, we have reasons to believe that the kidnappers are Al-Shabaab.”

The two doctors, whose names have not been released, are part of a group of about 100 Cubans who came to Kenya last year to help boost health services.

Al-Qaeda-linked Al-Shabaab militants have been waging an insurgency against Somalia’s foreign-backed government for over a decade.

Last November, an armed gang seized Silvia Romano, 23, an Italian charity worker, in the southeastern town of Chakama. Her whereabouts are unknown.

Police at the time warned against any speculation that the Shabaab may have been involved in her abduction.

The Shabaab, an Al-Qaeda affiliate, have been fighting since 2007 to topple Somalia’s fragile government, which is supported by a 20,000-strong African Union force, Amisom.

The Shabaab fled fixed positions they once held in Mogadishu in 2011, and have since lost many of their strongholds.

But they retain control of large rural swathes of the country and continue to wage a guerrilla war against the authorities, striking at the heart of Somalia’s government.

The group has carried out a number of attacks in Kenya in reprisal for the country’s participation in Amisom.

Kidnappings in Kenya are relatively rare but can have a devastating impact on tourism, a major income-earner.