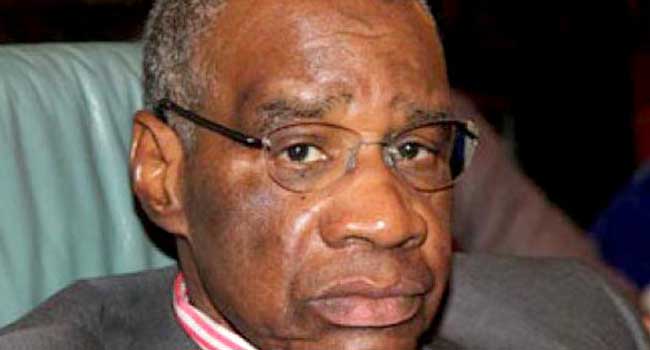 President Muhammadu Buhari has commiserated with the government and people of Jigawa State over the passing away of former Chief Justice of Nigeria, Justice Dahiru Musdapher.

According to a statement signed by the Special Adviser to the President on Media and Publicity, Femi Adesina, he also commiserated with the Kano and Ringim Emirate Council, professional colleagues, family members and friends of the eminent jurist.

The President commended the mediatory and conciliatory leadership roles the former Chief Justice played in his career development and nation-building while serving as Attorney-General and Commissioner for Justice, Kaduna State, Chief Judge, Kano State Judiciary, Justice, Court of Appeal and Justice, Supreme Court of Nigeria.

He prayed that Allah grants Musdapher’s soul good rest in eternity, noting that his contributions to the structure and spirit of the nation’s constitution and legal practice will always be remembered and greatly appreciated by generations.

Mr Musdapher died in the early hours of Tuesday at the age of 75. 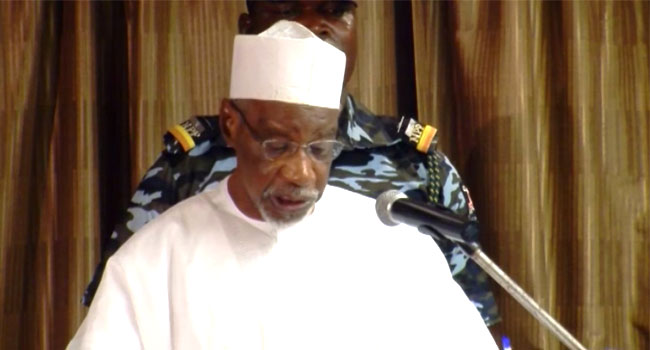 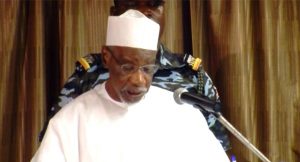 A former chief justice of the federation, Justice Dahiru Musdapher has advocated the decentralization of some aspects of government, especially in the areas of resource management, saying that the current federal appropriation system has bred laziness across many states of the federation.

He made the call in Abeokuta, the Ogun state capital while delivering a lecture titled ‘The Question of Nigeria’s Unity’ at the 75th birthday celebration of Chief Alani Bankole who is the father of a former speaker of the House of Representatives, Dimeji Bankole.

The former chief judge chronicled the many challenges facing the country and attempts by government towards resolving these challenges but regretted that despite all of the efforts, the country remains divided along ethnic, political and religious divides.

As if speaking on the current economic challenges facing the country, the former judge asked states of the federation to seek new and diverse avenues for economic transformation of their states.

He added that Nigerians must be brave in addressing the grievances and injustices committed on all sides that have pervaded the Nigerian society.

In his own contribution, the Speaker of the House of Representatives, Yakubu Dogara, was of the opinion that bad leadership remains the bane of Nigeria’s development.

He was, however, quick to also call for national cohesion and unity.

Among other dignitaries were former governors of Ogun and Jigawa states, Olusegun Osoba and Sule Lamido, Deputy Minority Leader of the House of Representatives, Onyeka Chukwu. 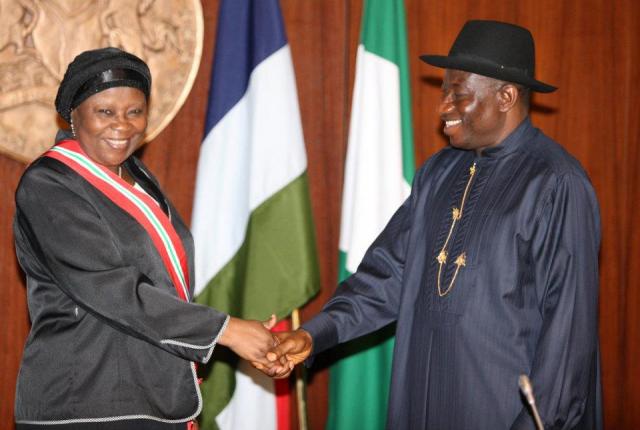 The president made this request at the State House, Abuja after swearing-in Justice Mukhtar as the first female and 13th indigenous CJN.

He said that the security challenges in some parts of the country called for concerted actions by the three arms of government.

Mr Jonathan also advised the new Justice Mukhtar to designate judicial officers with wealth of experience in criminal jurisprudence and terrorism to preside over the special courts for outstanding results.

“I am confident that the judiciary under your able leadership will rise up to the challenge and provide the most needed support for government to address these challenges,” the president said.

“Our citizens complain of delayed trials particularly in cases of corruption, terrorism and other matters of serious concern.

“These complaints have led to frequent calls for special courts or designation of special judges to handle them with the required experience and speed.

“It will be your prerogative to consider and decide on this call. But I am sure that the entire country is in agreement that justice delayed is justice denied.’’

Mr Jonathan charged the new CJN to fulfil her promise of reforming the judiciary, as made during her confirmation by the Senate.

He said that the independence of the judiciary was critical to national development and survival, and called on the new CJN to ensure timely justice delivery.

The President said though his administration had remained focused in projecting women, but the CJN achieved the outstanding feat of becoming Nigeria’s first female Chief Justice of Nigeria on account of her brilliance, resilience and hard work.

“Ladies and gentlemen, there is the hand of destiny in the life of this distinguished jurist. From the records, her lordship has always been a trailblazer in her judicial journey.

“Today, she has risen to the pinnacle of her judicial career as the first female CJN in further service of our great country. My lord, I congratulate you.

“Her lordship’s achievement is an inspiration to all citizens especially womanhood not only in Nigeria but also in Africa and the rest of the world.

“The Honourable CJN now joins an eminent and exclusive list of achievers recognised throughout the world as beacon of hope in this century,’’ he said.

The President thanked the immediate past CJN, Justice Dahiru Musdapher for the spirited efforts he made to restore public confidence in the judiciary within his short tenure in office.

“We wish Justice Musdapher, a well-deserved retirement and hope that he will avail his wealth of experience in the continued service of our nation especially as he is now a member of Council of State,’’ he said.

President Jonathan conferred on Justice Mukhtar the honour of Grand Commander of the Order of Niger, GCON; the second highest national honour in Nigeria.

Justice Dahiru Musdapher on Friday bowed out as the Chief Justice of Nigeria (CJN) having attained the retirement age of 70 years.

At a valedictory service held in his honor, Justice Musdapher advocated the creation of an Independent body other than the National Judicial Council, for the discipline and removal of Judges.

Justice Musdapher noted that investigation of allegation of impropriety against judicial officers is too cumbersome for the NJC which is saddled with other responsibilities.

He said the system which has been adopted by most Commonwealth countries, is in a better position to deal with issues of discipline and removal as opposed to an institution that is largely managed by those it is supposed to regulate.

Present at the occasion were governors of Kogi, Bauchi, Ekiti and Jigawa also present were retired justices of the Supreme court and the Appellate court ,members of the Nigerian Bar Association, the body of senior Advocates, federal lawmakers, traditional rulers, the mother of the retiring chief justice and other well wishers.

Soon after Justice Musdapher filed into the court to perform his last duty as the head of the nations judiciary, he swore-in two newly appointed justices of the supreme court, Justice Musa Dantijo Muhammed and Justice Clara Ogunbiyi.

Justice Musdapher outlined some of his achievements as the chief justice, one of which is the 47 amendments sought as part of the reform of the judiciary, he urged the National Assembly to be pro-active in passing the laws.

The outgoing chief justice also gave a score card of the Supreme Court at the end of the 2012 legal year.

He also made a case for another body to be responsible for judicial discipline and removal as the role has become too cumbersome for the National Judicial Commission.

His Lordship then bowed out of the court as the Chief Justice of Nigeria, having served thirty-three of his forty-four years career on the bench.

The outgoing Chief Justice of Nigeria explained the reasons why his directive to all courts in the country to dispose of all corruption cases within the last six months were not achieved.

According to him, the major reason is the cumbersome nature of the various charge sheets which contains so many counts charges making it difficult to prosecute.

He also blames defence lawyers whom he says have perfected strategies for stalling the trial processes via the filing of pointless interlocutory appeals.

This he said has necessitated the need for a speedy amendment of the  relevant  sections of the constitutions to block all loop holes  for unjustified invocation of the right of appeal.