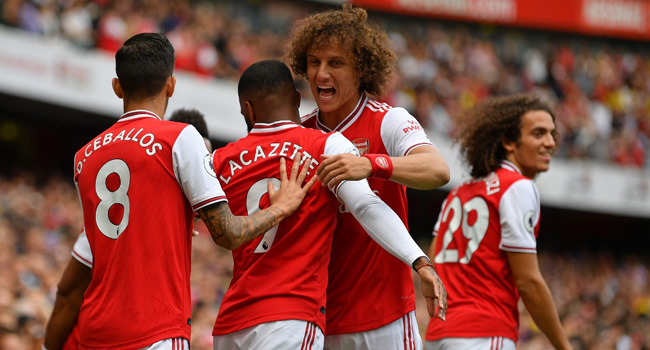 Unai Emery saluted his Arsenal new boys as David Luiz, Dani Ceballos and Nicolas Pepe all contributed to a 2-1 win over Burnley on Saturday.

Emery’s side made it successive victories to start the Premier League season thanks to goals from Alexandre Lacazette and Pierre-Emerick Aubameyang either side of an Ashley Barnes equaliser.

While Lacazette and Aubameyang are two of Arsenal’s key men, they were both present during the club’s dismal end to last season.

So, it was encouraging for Gunners boss Emery that his close-season recruits gave glimpses of their quality to help seal the points.

Former Chelsea defender David Luiz made his first appearance and, despite Burnley threatening from set-pieces, he eased in comfortably next to Sokratis.

On-loan Real Madrid midfielder Ceballos put in a man of the match performance featuring two assists on his home debut, while club-record signing Pepe came off the bench at half-time to add verve to the Arsenal attack.

Asked about how his recent acquisitions had fared, Emery said, “What we wanted to create was a big atmosphere with our supporters together today and this season.

“Today, with some new players, they made an impact in the first match here. We created this atmosphere.

“We can also say that the young players have the chance to play. I think you can speak about all the team because we worked together with an individual quality and capacity, but above all thinking like a team.”

‘Cheat once a game’

Meanwhile, Burnley boss Sean Dyche used his post-match press conference to once again call for the football authorities to stamp out diving in the game.

While Dyche refused to single out any Arsenal players for simulation, he was clear in his call for greater punishments to be doled out.

“The game is in a really poor state for players diving, feigning injuries, all sorts,” he said.

“I found it peculiar. I was at a Premier League meeting a couple of weeks ago and they told us the worst that can happen is a yellow card. So basically every player in the Premier League can cheat at least once a game.

“Have you ever thought about that? I don’t know any sport where they tell you that you can cheat once a game. I’ve never seen that in sport before.

“It’s not about Arsenal. It’s about the greater good of the game. The game is in a really poor state, with players literally falling on the floor. I’m the only one who ever talks about it.”

Asked for how he would solve the issue, Dyche replied: “Simple. Ban them. It would be out of football within a month.” 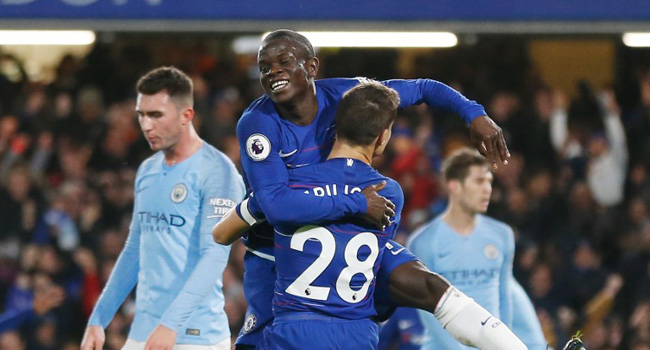 Chelsea inflicted champions Manchester City’s first Premier League defeat of the season as goals from N’Golo Kante and David Luiz handed the hosts a 2-0 win at Stamford Bridge and sent Liverpool top of the table.

Kante’s goal just before half-time came against the run of play as the visitors dominated the first 45 minutes, but without the injured Sergio Aguero, City lacked a cutting edge up front and Luiz’s header 12 minutes from time sealed a huge win for Chelsea.

Liverpool are now a point clear of City after Mohamed Salah scored a hat-trick in a 4-0 victory at Bournemouth earlier on Saturday.

Chelsea boss Maurizio Sarri had lost all of his previous three meetings against City boss Pep Guardiola and was growingly increasingly frustrated at his side’s inability to hold possession as the visitors dominated the first half.

Raheem Sterling should have scored when his weak left-footed finish was placed too close to Kepa Arrizabalaga before the world’s most expensive goalkeeper also denied Leroy Sane from a narrow angle.

Only a brave block by captain Cesar Azpilicueta rescued Chelsea when City next threatened as Sterling eased past Marcos Alonso and Sane’s fierce effort was deflected over by the Spanish defender.

Yet, for all City’s possession, the visitors were stung by a sucker punch just before half-time as Sarri’s decision to field Eden Hazard as the focal point of the Chelsea attack and maintain Kante in an advanced midfield role paid off.

Sarri has resisted calls to return Kante to the deep-lying midfield role where he shone in winning the World Cup with France and Premier League titles for Leicester and Chelsea at the expense of Jorginho.

Hazard was finally fed the ball to feet inside the City box and his pass picked out Kante, who side-footed the ball high past Ederson.

The Brazilian goalkeeper had been a spectator before picking the ball out his net but was called into action again to keep his side in the game just after the break when he palmed away Willian’s free-kick.

Willian wasted another good chance on the counter-attack as having been behind only once before in the Premier League this season, City were rattled and rarely threatened to get back in the game in the second period.

Guardiola’s men may also have to cope without David Silva for some of the festive season after the Spaniard hobbled off holding his hamstring.

Defending set-pieces has often been a rare Achilles heel for City and it was exposed when Luiz made the game safe by rising highest to Hazard’s corner and looping a header in off the underside of the bar.