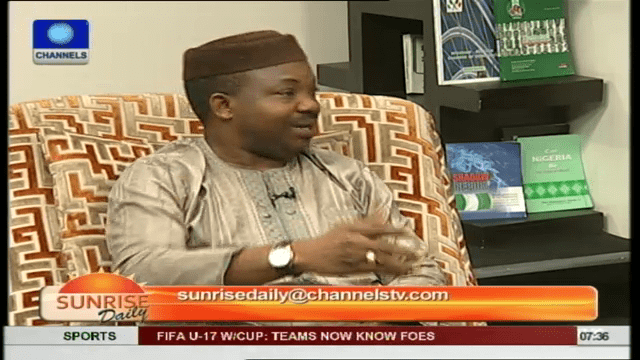 Spokesman of the Pan Yoruba socio-cultural group, Afenifere, Yinka Odumakin has linked the proliferation of political parties in Nigeria to the abundance of funds looted by founders of the parties.

Odumakin, a former spokesman of the presidential candidate of the defunct Congress for Progressive Change (CPC), Gen Muhammadu Buhari, said this during an interview on Channels Television’s morning flagship programme, Sunrise Daily on Tuesday.

“The people who can afford to form new parties are the ones who have looted resources and funds to play around with,” he said.

The politician said the rise of new parties spells doom for politics as it is known in Nigeria adding that “I think we are seeing the end of politics in Nigeria.”

The aftermath of the successful registration of the All Progressive’s Congress (APC) by the Independent National Electoral Commission (INEC) has caused an upsurge of many other groups who have signed up for registration by the electoral body.

This is happening because “the day the elephant dies, you see all manner of knives.” Mr Odumakin said “everybody wants to grab this thing” because there is distrust amongst politicians, which has resulted in “all manner of parties”.

However, this new era has resulted in fewer choices for the masses because all the parties look and speak the same way. “I have learned to watch what men are doing rather than what they are saying”

Although there are new parties, there is a dearth of fresh blood as members of the new parties are the “same set of people dividing themselves into new formations”.

He described “most of the so called new parties” as “old wine in new bottles,” adding that in Nigeria “the more things change, the more they remain the same”

Although the APC has been touted as the party to unseat the ruling PDP, Mr Odumakin regards the party’s promises as ‘empty platitudes’ with “no ideology defining all these things”.

After a read through the 31-page manifesto the APC produced “you will see some wish list but if you look at it there is no ideological thread tying all these things together”.

The former CPC member stated that the 1999 constitution, which has accommodated corruption and the likes, is the country’s greatest problem. In his opinion, a total change and not an amendment is the only solution.

He accused Nigerians of reproducing bad leaders as he asked “why have Nigerians continued to continually produce worst set of leaders than the previous ones?”