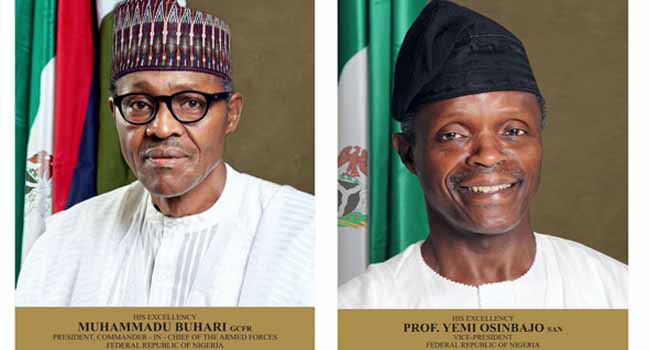 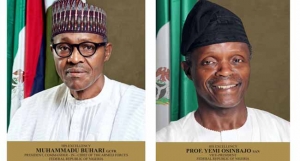 President Muhammadu Buhari says in fulfilment of one of their campaign promises, his declared assets and those of Vice President Yemi Osinbajo will be released to the public upon the completion of their verification by the Code of Conduct Bureau (CCB).

The President’s Spokesperson, Garba Shehu, announced this in a statement on behalf of the President on Saturday, June 6.

While hoping  that the verification process would be completed before the expiry of the 100-day deadline within which they said they would do this, he said “the duly completed forms by both the President and the Vice President were submitted to the CCB on May 28th, a clear day ahead of their inauguration.”

He said this statement was warranted by the need to clarify some suggestions that the President and the Vice-President may not, after all, declare their assets publicly.

“While such public display of concern is appreciated and valued, it must be said that it is a little precipitate.

“As required by law, the declaration and submission of documents to the CCB have been made, but there still remains the aspect of verification which the Bureau will have to conduct to authenticate the submissions made to it.

“In the circumstances, it is only after this verification exercise, and not before, that the declaration can be said to have been made and validated; and only after this, will the details be released to the public.

“There is no question at all that the President and the Vice President are committed to public declaration of their assets within the 100 days that they pledged during the presidential campaign.

“The President and the Vice President wish to thank Nigerians for their show of concern, and for the confidence they have shown in their leaders’ integrity, as evidenced by the high pedestal of uprightness and expectations on which they have placed them.”

Socio-Economic Rights and Accountability Project (SERAP) has urged President Muhammadu Buhari and Vice President Yemi Osinbajo to declare their assets publicly, consistent with their apparent anti-corruption credentials and their promise to do so.

SERAP made the request in a statement by its Executive Director, Adetokunbo Mumuni, on Sunday, following the declaration of assets by the President and Vice President to the Code of Conduct Bureau as required by the Constitution.

“We welcome the official declaration of assets by the President and Vice President. This clearly complies with the requirements of the Nigerian Constitution as contained in Chapter VI Section 140. However, the declaration before the Code of Conduct alone falls far short of the commitment to publicly declare their assets.

The organisation also expects the President and Vice President to “publicly declare their assets and to publish widely the information on a dedicated website.”

“Public disclosure of assets will give the general public a true picture of the assets of the President and Vice President and will send a powerful message that it is not going to be business as usual with this government.

“This will also follow the best practice by former President Umaru Musa Yar’Adua, boost this government’s fight against corruption and impunity of perpetrators, and fully comply with the provisions of chapter two of the dealing with Fundamental Objectives and Directive Principles of State Policy, which among others require the government to take steps to eradicate corrupt practices and the abuse of power,” the group added.

The group said that it believes that public disclosure of assets is crucial for ensuring that public officials’ personal interests including that of the President and Vice President as the leaders of the nation, do not conflict with their duties and responsibilities.

“Public disclosure also helps to provide a baseline and thus means for comparison to identify assets that may have been corruptly acquired and that a public official may legitimately be asked to account for.”

“”We also urge the President to urgently take measures to seek amendment of the law relating to declaration of assets to include the requirement of public disclosure so as to bring it in line with international standards and best practices such as the UN Convention against Corruption,” SERAP added.

The President of Nigeria, Muhammadu Buhari and Vice President, Professor Yemi Osinbajo, have declared their assets, as required by the Constitution of the Federal Republic of Nigeria.

The head of President Buhari’s Media Team, Garba Shehu, gave the hint about the declaration of assets in a statement made available to Channels Television on Saturday.

“The Code of Conduct Bureau on Friday acknowledged the submission of President Buhari’s and Vice President Osinbajo’s assets declaration form submitted separately on May 28, and signed for by the organisation’s Chairman, Sam Saba. President Buhari’s Declarant ID was given as: ‘President: 000001/2015’,” the statement read.

The Nigerian Constitution states in Chapter VI Section 140, that a person elected to the office of President shall not begin to perform the functions of that office until he has declared his assets and liabilities as prescribed in the Constitution.

The figures, as declared, are not yet available.

By declaring their assets, President Buhari and Vice President Osinbajo may have not only fulfilled the requirements of the Nigerian Constitution, but also fulfilled the first of their many campaign promises.

While seeking election into the highest office in the land, the President had promised Nigerians that he would publicly declare his assets as soon as he took over government.

Advocates of declaration of assets say it will put a stop to corrupt practices.

After taking the Oath of Office on Friday, President Buhari reiterated his commitment to tackling corruption in Nigeria, but said his government would not be interested in “paying off old scores”. 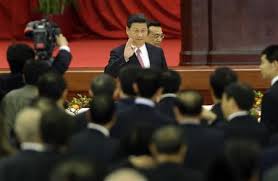 Three Chinese anti-graft activists who agitated for officials to disclose their assets went on trial on Monday in the first case of its kind, underscoring the limits of government tolerance of challenges to its authority.

Despite an official drive against corruption, China has detained at least 15 activists in recent months who were involved in a campaign pushing for officials to disclose their wealth.

Rights groups describe the detentions as the first major crackdown against activists by the new government. The trial of Liu Ping, Li Sihua and Wei Zhongping is the first prosecution of anti-graft activists.

The three were detained in late April in Xinyu, in the poor, landlocked southern province of Jiangxi, and accused of illegal assembly. They face a maximum of five years in prison if convicted.

Officials in Xinyu could not be reached for comment.

Zhang Xuezhong, one of two lawyers defending Liu, said police had tried to prevent the legal defense teams from entering the court in the morning, though the court intervened and they were eventually allowed in.

“All three are pleading not guilty,” Zhang told Reuters by telephone from outside the court, adding he was not optimistic about the case given its sensitivity.

The three are involved in the New Citizens Movement, which advocates working within the system to press for change. Its founder, the prominent activist Xu Zhiyong, was arrested in August.

Wang Cheng, a lawyer friend of the three who is not directly involved in the case, said he believed the government was trying to send a message that it would not tolerate the activities of rights groups.

“They’re using this case to warn others, to bring these activities under control,” Wang said. “It shows how nervous they are.”

“CANARIES IN THE COAL MINE”

The ascendancy of Xi Jinping as Communist Party chief in a once-in-a-decade leadership transition last November had given many Chinese hope for political reform, spurring citizens to push officials to disclose their wealth in several movements throughout the country.

But the charges against the activists are a strong indication that the Communist Party will not tolerate any open challenge to its rule under Xi, even as it claims more transparency.

Xi, who became president in March, has called for a crackdown on graft, warning, as many have before him, that the problem is so severe it could threaten the party’s survival.

Encouraged by Xi’s calls for more transparency, the activists took photographs of themselves holding banners and placards that said: “Strongly urge officials to disclose their assets” and “Xi Jinping, immediately end dictatorship”.

The pictures were widely circulated online.

“Liu, Wei, and Li are canaries in the coal mine for how the government intends to treat this influential group of anti-corruption activists,” said Sophie Richardson, China director at Human Rights Watch.

“Anything short of acquittal will seriously undermine the credibility of the government’s claims to be cracking down on corruption.”

There have been a few pilot schemes for low-level officials in China’s southern Guangdong province to disclose their assets, but the efforts have made little progress and discussion of the wealth of senior leaders such as Xi remains firmly off limits.