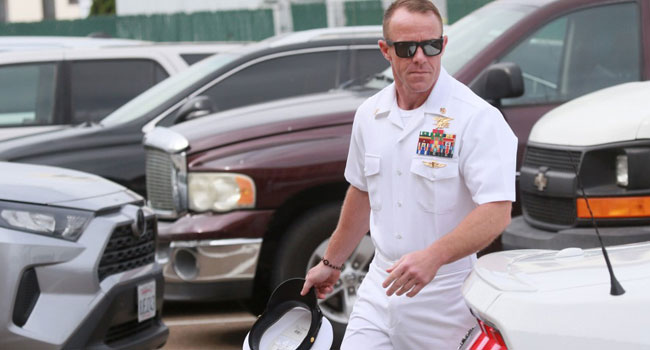 The US defense secretary Monday defended the decision to sack his navy secretary, saying he went behind his back to make a deal with the White House over a convicted Navy SEAL’s future.

Esper and Milley were holding their own discussions with President Donald Trump last week about the SEAL’s case, which caused a rare public split between the Pentagon leadership and the US commander in chief over military justice.

“We were completely caught off guard by this information, and realized that it undermined everything we have been discussing with the president,” Esper said of Spencer’s secret talks.

“Secretary Spencer broke these rules and thus lost my trust and confidence.”

Spencer was fired on Sunday amid a dispute over whether Edward Gallagher, a Navy SEAL accused of war crimes in a high-profile case but convicted of a lesser offense, should be demoted and expelled from the elite commando force.

Gallagher, a SEAL sniper, and medic, was originally accused of premeditated murder after allegedly stabbing to death a captured, wounded Islamic State fighter in Iraq in May 2017.

After Gallagher went on trial at the beginning of 2019, his case became a cause celebre in conservative media, championed especially by Fox News, and Trump voiced support for him.

In March the president intervened to have him taken out of a Navy jail and placed in a Navy hospital, where he had more freedom.

In July, he was acquitted of murder by a military jury, but convicted of having posed for a picture next to the body of a dead Islamic State fighter.

He was demoted and the navy moved to remove his official Trident pin, an insignia that signified he remained a member in good standing of the elite group.

Trump intervened again, to order the trident pin and rank restored, saying he would not be expelled from the force.

“Eddie will retire peacefully with all of the honors that he has earned,” Trump tweeted.

Esper conformed that Spencer had threatened to resign over the case, which military experts said risked undermining confidence in the Pentagon’s system of justice.

But Esper said that while he and Milley sought a resolution with Trump, Spencer, a subordinate to both, had tried to cut his own deal with the White House.

Spencer “was completely forthright in admitting what had been going on,” Esper told reporters Monday.

In a letter to Trump on Sunday, Spencer explained his resistance to the president’s interference in the case.

He wrote that he could not “in good conscience obey an order that I believe violates the sacred oath I took… to support and defend the Constitution.”

He added that his responsibility was “to maintain good order and discipline” throughout the navy’s ranks. “I regard this as deadly seriously business,” he said.

Esper said Monday that the case had dragged on too long and had become “distracting.”

“Eddie Gallagher will retain his Trident as the commander in chief directed, and will retire at the end of this month,” he said. 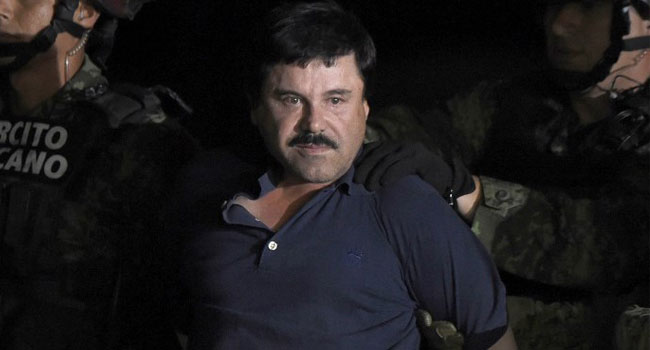 Opening statements finally got underway after two jurors were dismissed from the lineup, forcing lawyers and the judge to re-interview potential candidates before the full panel could be sworn in.

One woman was struck after complaining that the trial was causing her health problems, along with a man who said he would not be able to support himself financially during the trial. Two replacements were subsequently found.

Guzman, one of the world’s most notorious criminals, is on trial in New York after twice escaping from prison in Mexico. He faces 11 trafficking, firearms and money laundering charges in what is expected to be a more than a four-month trial.

He is accused of leading the Sinaloa cartel and turning it into the largest criminal organization on the planet. He is considered the world’s largest drug trafficker since the death of Colombia’s Pablo Escobar.

But in opening statements, the defense alleged that Guzman’s co-defendant who remains at large, Ismael “El Mayo” Zambada, was the real culprit.

“The truth is he (Guzman) controlled nothing, Mayo Zambada did,” Jeffrey Lichtman told the US federal court in Brooklyn.

Zambada, he alleged, bribed everybody, “including the very top, the current president of Mexico and the former,” he added in reference to Mexico’s outgoing President Enrique Pena Nieto and his predecessor, Felipe Calderon.

Both Calderon and Pena Nieto swiftly denied taking any bribes from the Sinaloa cartel, the former calling the allegation “absolutely false and reckless” and the latter saying it was “completely false and defamatory.”

“Mayo can get people arrested and get the Mexican army and police kill who he wants,” Lichtman added.

Instead, Guzman, who has been in solitary confinement in America and whose trial is accompanied by massive security, is a “scapegoat,” the lawyer claimed.

“Why does the Mexican government need a scapegoat? Because they’re making too much money being bribed by the leaders of drug cartels.”

The 12 jurors who will determine the 61-year-old defendant’s guilt or innocence have an enormous and onerous task before them.

During jury selection last week, several potential jurors were dismissed because they feared for their lives, as was another who suffered a panic attack.

Their names will be kept anonymous. They will be partially sequestered, escorted to and from court every day by armed US Marshals.

Prosecutors contend that Guzman spent a quarter of a century smuggling cocaine into the United States.

“Money, drugs, murder; a vast global narcotics trafficking organization. That is what this trial is about and that is what the evidence, in this case, will prove,” Assistant US Attorney Adam Fels told the court.

Guzman, he alleged in his opening statements, had his “own private army” of hundreds of men armed with assault rifles, as well as his own diamond-encrusted pistol branded with his initials and a gold-plated AK-47.

‘In his own words’

US prosecutors have spent years piecing together a case that they hope will end with Guzman spending the rest of his life behind bars in a maximum-security US prison, accumulating more than 300,000 pages and at least 117,000 recordings in evidence against Guzman.

While he is not on trial for murder, They contend that he ordered or committed at least 33 homicides. “You’ll see how Guzman pulls the trigger,” the prosecutor told jurors.

Prosecutors promised to discuss “this global narco empire in his own words” and from witnesses detailing how he would receive $10 million from a single shipment of cocaine.

More than a dozen of the several hundred witnesses expected to testify are in witness protection programs or are already in jail, housed in special wings to protect them from reprisals.

“He was indeed the boss of his organization,” the prosecutor added, saying Guzman “used planes, trains, automobiles, fishing vessels, trucks, even submarines,” to traffic drugs to the United States.

Guzman arrived in New York in January 2017. He twice escaped from prison in Mexico, once hidden in a laundry cart and the second time slipping down a tunnel that reached his prison shower.

In New York, he spends 23 hours a day in his cell. The only visitors he is allowed are his lawyers and daughters, from whom he is separated by thick glass. 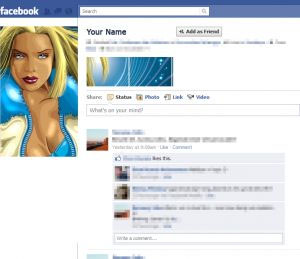 This probably shouldn’t come as a huge surprise, as a lot is going in the world of the social media network with the advancement of technology the world over.

According to a review of social media and defense by the Australian government, an “overt reliance” on privacy settings has led to a “false sense of security” among personnel. In other words — just because you’re a Facebook privacy ninja doesn’t mean you should go around posting military secrets on the Internet.

The tech-savvy Taliban created fake Facebook profiles using pictures of attractive women and with these fake profiles befriended Australian soldiers, gathering information based on those soldiers’ Facebook updates in the process of friending them.

A big problem, of course, is Facebook’s geo-tagging function, which logs the location from which posts or photos are uploaded. If a soldier posts something to Facebook while they’re in the field, this pretty much gives away their location.

According to News.com.au, three Australian soldiers were murdered inside their base this month, allegedly by an Afghan Army trainee.

According to the review of social media and defense, many soldiers did not realize that people using fake profiles can capture information and movements.

“Few consider the possibilities of data mining and how patterns of behaviour can be identified over time,” the review states. The review surveyed 1577 Australian Department of Defence members on their social media practices and knowledge (or lack thereof) of associated risks. Fifty-eight per cent of Defence staff reportedly had no social media training.

The Australian Department of Defence is currently working on new social media guidelines, which will be released by Christmas.

You may not be a member of the Australian military, but that doesn’t mean you should go around friending just anybody on Facebook. Fake Facebook friends and profiles have been around since the beginning of Facebook, and may be anyone from federal agents to spies to companies looking for buzz.

The obvious advice is that you shouldn’t add anyone on Facebook unless you know them in real life — hot girl or not. However, if you insist on making virtual friends over social networking platforms, here are some guidelines to keep your personal information safe:

– Add as little personal information as possible to your profile. Needless to say, your address, phone number, and date of birth (at the very least, birth year) should not be publicly available or even available to “friends only” on your profile.

– Understand how social engineers can use different pieces of information on the Internet to gather intel about you. For example, if you put your birth day and month on your Facebook profile, and you put your high school graduation year on your LinkedIn profile, a savvy social engineer will be able to put two and two together. Therefore, limit personal information as much as possible.

– Monitor what your friends say to you and about you on Facebook. In your Privacy settings, it’s a good idea to turn on the “review posts” feature, which lets you approve (or disapprove) posts your friends want to tag you in before they automatically appear on your timeline. To turn on this feature, go to Privacy > Timeline and Tagging > Review posts friends tag you in before they appear on your timeline, and turn it “On.”

– Be careful about what your photos say. Many smartphones automatically geo-tag photos, so it’s a good idea to turn this off, if possible. To turn off geo-tagging on an iPhone, go to Settings > Location Services > Camera, and turn the Location Services “Off” for the camera. To turn of geo-tagging on an Android phone, open up your camera, go to Camera settings > Store location, and make sure this is turned “Off.”

The easiest way to avoid this type of privacy mishap is to only friend people you actually know in real life. Still, it’s a good idea to take these precautions–after all, you never know which of your real-life Facebook friends may have left their account open on a public computer somewhere.