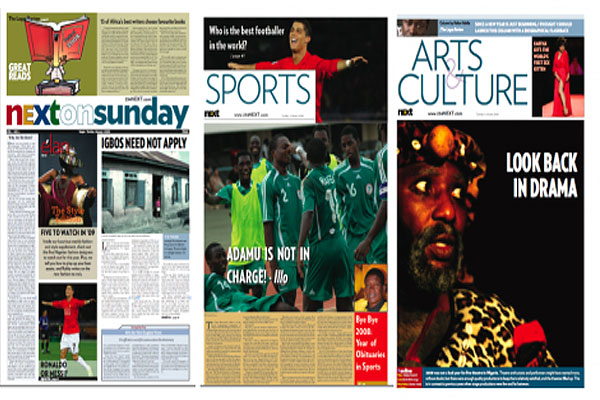 The National Industrial Court of Nigeria, Lagos Judicial Division has ordered Timbuktu Media Limited, publishers of the rested NEXT Newspaper, to pay six ex-staff of the company their unpaid wages on or before April 6, 2013.

The ex-staff had gone to court to challenge alleged wrongful termination of appointment and non-payment of entitlements. The ex-staff include Olukayode Thomas, Opeyemi Olus, Ireyimka Oyegbami, Ayodamola Owoseye, Olusola Babarinsa and Bolade Oladoye.

Timbuktu Media Limited was founded by Pulitzer award winning reporter, Dele Olojede, who launched www.234next.com in 2008 and thereafter followed with the weekend and then daily versions of the paper.

The papers and online version were rested by 2011 following what Olojede termed lack of advertisement patronage. However, various critics, including former staff of the company, accuse Olojede of supervising a management board that indulged in reckless spending and poor marketing strategy.

In his judgment, Judge B Kanyip ordered Timbuktu Media Limited to pay the claimants their entitlement, general damages and cost of legal action on or before April 6.

Olojede, according to close associates, is considering either reviving the company or launching a new media firm.