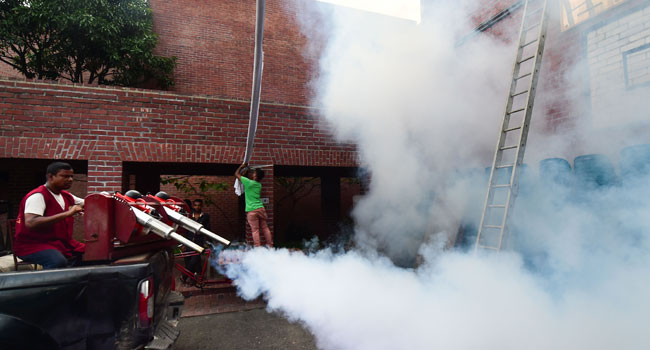 At least 40 people have died in Bangladesh’s worst-ever outbreak of dengue, officials said Tuesday, as overburdened hospitals struggled to treat thousands of patients.

Outbreaks of the mosquito-borne viral infection, which causes flu-like symptoms but can be deadly if it develops into a haemorrhagic fever, usually occur in the South Asian nation during the monsoon season between June and September — but this year the disease has reached epidemic proportions.

More than 44,000 people have been admitted to hospitals with the illness since January, including some 2,100 on Monday alone, said health ministry official Ayesha Akhter.

“We have confirmed 40 dengue-related casualties so far to Monday,” she told AFP.

The week-long holiday marking the Muslim festival of Eid-al-Adha has seen hundreds of thousands of people leaving Bangladeshi cities to return to their family homes in the countryside, raising concerns that the disease will spread further.

The country’s health minister said the outbreak was “gradually reducing” while inaugurating an emergency dengue ward at a public hospital in Dhaka this week.

For the first time on record, holidays for all public health workers have been cancelled to help respond to the crisis, said health ministry director-general Abul Kalam Azad.

“It is getting very tough to cope up with the amount of work pressure,” one medical officer told AFP.