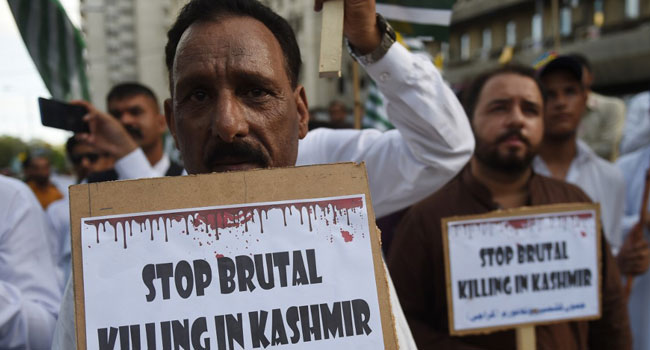 Thousands of people have been detained in Indian Kashmir over fears of unrest since New Delhi stripped the restive region of its autonomy two weeks ago, government sources told AFP.

A magistrate speaking to AFP on condition of anonymity said at least 4,000 people were arrested and held under the Public Safety Act (PSA), a controversial law that allows authorities to imprison someone for up to two years without charge or trial.

“Most of them were flown out of Kashmir because prisons here have run out of capacity,” the magistrate said, adding that he had used a satellite phone allocated to him to collate the figures from colleagues across the Himalayan territory amid a communications blackout imposed by authorities. 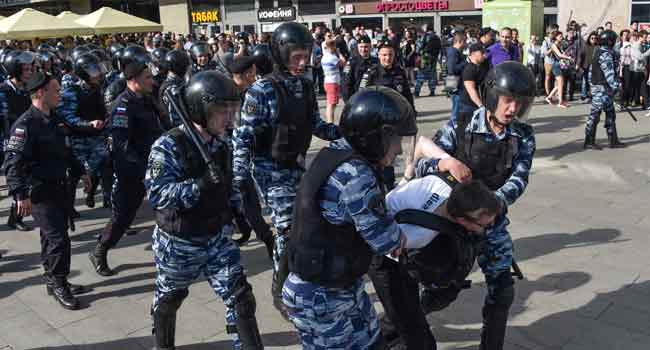 Russian opposition leader, Alexei Navalny, was detained along with more than a thousand of his supporters on Saturday during nationwide rallies against Vladimir Putin as police used force to break up rallies in Moscow and Saint Petersburg.

Riot police beat protesters with truncheons dragged them along the ground and threw them into police vans in Moscow, in an attempt to disperse a huge crowd that packed Pushkin Square to protest against Putin’s swearing-in ceremony on Monday.

Police grabbed Navalny, 41, soon after he showed up at the rally, as some shouted “Shame” in Ukrainian, a famous slogan of the Kiev uprising that ousted a Kremlin-backed regime in 2014.

Navalny, who was barred from challenging Putin in the March presidential election, had called on Russians to stage a day of rallies across the country under the catchy slogan “Not our Tsar.”

Earlier Saturday, protesters rallied in towns and cities in Russia’s Far East and Siberia and some of those protests were violently broken up.

Independent monitoring group OVD-Info said more than 1,000 people had been detained by police nationwide. Of them, more than 470 were detained in Moscow and more than 50 in second city Saint Petersburg.

Police — which put the Moscow turnout at 1,500 people — warned it would use force and “impact munition” against the demonstrators.

Scuffles also broke out between Navalny’s supporters and pro-Kremlin activists who descended into the square in an apparent effort to sabotage the opposition demonstration.

Anti-Kremlin protesters chanted “the fourth term — in prison” and “sick of you.”

In Saint Petersburg, several thousand people marched along Nevsky Prospect, the city’s main thoroughfare, chanting “Putin is a thief” and “Down with the tsar”.

When police tried to stop the unsanctioned march, protesters pelted them with eggs and water bottles, an AFP reporter said.

‘Putin not a tsar’

“The country needs changes,” said a 20-year-old protester, Stepan Duvanov. “Putin is not a tsar to be sitting (at the Kremlin) forever.”

Elsewhere, many protesters were also detained in a rough manner, observers said.

In the Urals city of Chelyabinsk more than 160 people were detained, while 35 were arrested in the eastern Siberian city of Krasnoyarsk, said OVD-Info.

A number of Navalny’s activists were also arrested across Russia ahead of the protests on Friday.

“Craven old man Putin thinks he is a tsar,” Navalny said on Twitter ahead of the demonstrations.

Observers had expressed fears that the protests could lead to mass arrests after similar rallies in 2012 led to a huge crackdown on the protest movement.

In May 2012, tens of thousands took to the streets to protest Putin’s inauguration for a third Kremlin term, with rallies descending into clashes with police.

Criminal charges were brought against around 30 demonstrators and many of them were sentenced to prison terms of between 2.5 years and 4.5 years.

The 65-year-old Putin, who has ruled Russia for almost two decades, was re-elected for a fourth Kremlin term in March.

He recorded his best ever election performance with more than 76 percent of the vote.

Independent monitors said the election was marred by a lack of genuine competition even though fewer irregularities were reported than in previous years.

‘Journey of an invader’

This year Putin’s minders are planning a fairly low-key inauguration ceremony that will not include a lavish Kremlin reception in an apparent effort to eschew any bad publicity, TV Rain, an independent channel, reported Friday, citing informed sources.

In 2012, Putin’s black cortège raced through the deserted streets of Moscow on the way to his third Kremlin inauguration with authorities cordoning off roads, in what many saw as a major faux pas.

This time Putin will instead meet with volunteers who took part in his election campaign, the television channel said.

Speaking on radio, prominent political analyst Stanislav Belkovsky said that throwing a Kremlin banquet for the elites “when the number of poor people is sharply rising due to Western sanctions and counter-sanctions” is now seen as an unaffordable luxury.

Belkovsky said many people saw Putin’s sweeping through deserted streets in the capital in 2012 as a “journey of an invader.”