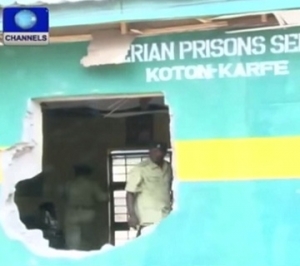 6 out of the 13 inmates that escaped from the Koton Karfe Prisons were on Sunday re-arrested and are back in custody.

This was announced by the Director Press, Ministry of Interior, Mr Willie Bassey.

Earlier, the Kogi State Governor, Mr Yahaya Bello has raised an alert about an alleged threat to the state following a prison break in Koton Karfe.

A prison break had occurred at the Koton Karfe Medium Security Prison in Kogi State on Saturday, where about 13 inmates are said to have broken their cells and escaped through the fence.

Three of the 13 are convicts.

The inmates at the new prison site broke the wall of the perimeter fence and escaped into the bush.

This is the third time inmates have successfully broken out of this facility raising concerns on the level of security within the premises.