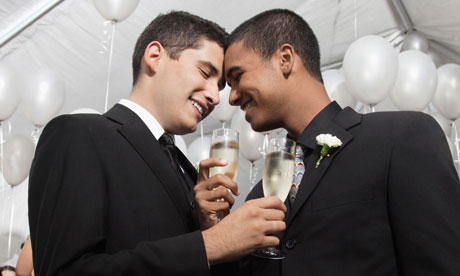 Studies have shown that married couples enjoy better health than people who are single, divorced or separated.

When Dr. Hui Liu, an assistant professor of sociology at Michigan State University, and her team studied the health of gay and straight couples, they found marriage made a difference.

Although the researchers did not study the impact of legalizing gay marriage, Liu said it is plausible that if gay unions were sanctioned by law it could improve health by reducing stress and discrimination and providing health benefits enjoyed by married couples.

“If marriage can promote health, it is reasonable for us to expect that if same-sex couples had the advantage of legalized marriage their health may be boosted,” Liu added in an interview.

The researchers compared the health of 1,659 gay couples living together and a similar number of married heterosexuals. They pooled data from 1997 to 2009 National Health Interview Surveys in which people across the country were asked to rate their overall health as excellent, very good, good, fair or poor.

The study, which is published in the Journal of Health and Social Behavior, showed that black women living together as a couple were the most disadvantaged. They reported worse health than any other non-married black women.

Liu and her co-authors, Corinne Reczek an assistant professor of sociology at the University of Cincinnati, and Dustin Brown, a post-graduate student at the University of Texas at Austin, suggest that the discrimination and stress that gay couples experience could contribute to their poorer health.

“Legalizing same-sex marriage could also provide other advantages often associated with heterosexual marriage – such as partner health insurance benefits and the ability to file joint tax returns – that may directly or indirectly influence the health of individuals in same-sex unions,” Liu added.