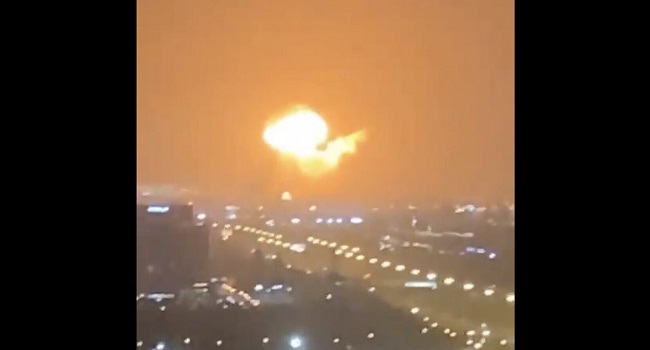 A fire that broke out on a container ship in Dubai’s main port following a blast has been bought under control with no casualties reported, the emirate’s media office said Thursday.

At least three residents in the area of the blast, the cause of which remains unknown, reported windows and doors in their homes were shaken as a result of the incident.

“A fire caused by an explosion within a container on board a ship at Jebel Ali Port has been brought under control; no casualties have been reported,” the Dubai Media Office wrote on Twitter.

The post was accompanied by video of firefighters tackling the blaze on a large vessel stacked with containers, identical except for their logos, as the flames scattered detritus over the quayside.

An AFP correspondent at the scene said there was a helicopter circling overhead as smoke rose from the tightly secured facility.

The port is capable of handling aircraft carriers and was the US Navy’s busiest port of call outside of the United States in 2017, according to the US’ Congressional Research Service.

Such events are a rarity in the ultra-secure Gulf emirate, one of seven which make up the wealthy United Arab Emirates.

– ‘Saw the windows shaking’ –
“I was outside on my balcony. My friend saw something yellow coming (like) the sun. I took the picture and after (there was) a sound,” said intern Clemence Lefaix, who is staying near the blast site and posted a photo of a bright orange light against the night sky in front of apartment buildings.

A resident of Dubai’s Marina district, close to the Jebel Ali port, told AFP they “saw the windows shaking”.

“I have been living here for 15 years and this is the first time I’ve seen and heard this,” they said.

There are 8,000 companies based at the Jebel Ali Free Zone (JAFZA) which contributed a whopping 23 percent of Dubai’s gross domestic product last year. It is the Middle East’s largest trade zone.

The glitzy Gulf emirate of Dubai transformed itself over 50 years from a sleepy port town to a regional travel, trade and financial services centre.

The city state is now home to more than three million people, mostly foreigners, compared with only 15,000 inhabitants in the 1950s.

Unlike Abu Dhabi, the leading member of the UAE that sits on a large wealth of petroleum, Dubai has dwindling oil resources and has worked to develop non-oil industries, diversifying into services. 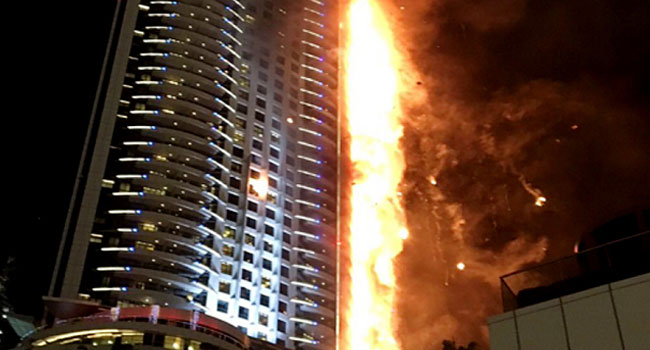 According to reports flames engulfed a large section of the high-end Address Hotel soon after the blaze began around 9:30 p.m.

Hours later, dark plumes of smoke billowed from the building, as the fire still appeared to be searing several stories.

The CNN quoted witnesses as saying that they heard explosions, as the fire raged.

Early reports from Dubai authorities said the fire started on the 20th floor of the 63-floor hotel.

Evacuation of people from the area began minutes after the flame was noticed.

The CNN also quoted the Dubai government’s media office as saying that at least 14 people sustained minor injuries from the fire.

Despite the fire outbreak, the highly anticipated New Year’s Eve festivities in the United Arab Emirates’ most populous city went ahead as planned.

Cheering crowds of onlookers watched as bursts of colour filled the sky.