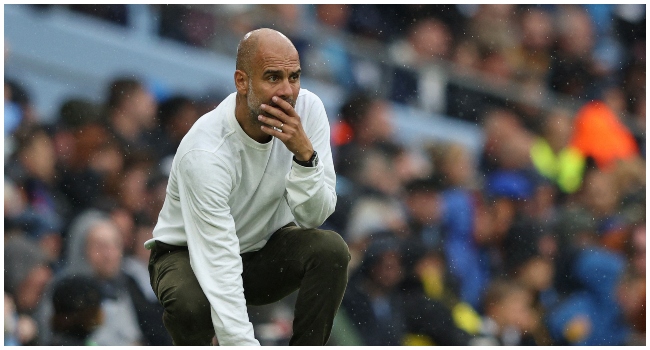 Manchester City boss Pep Guardiola has tested positive for Covid-19 in a major outbreak at the Premier League club as Burnley also announced on Thursday that manager Sean Dyche had been sidelined by the virus.

“Pep Guardiola will miss tomorrow evening’s FA Cup trip to Swindon Town after testing positive for Covid-19,” the club said in a statement.

“The City manager recorded a positive test on Tuesday along with assistant Juanma Lillo. Both are now isolating, along with a number of other positive cases within the City first-team bubble.

“This brings the number of those isolating for Covid-related reasons amongst the group to 21. Of that number, 14 are backroom staff and seven are first-team players.

Despite the outbreak, the third-round FA Cup tie is still scheduled to go ahead with another of Guardiola’s assistants, Rodolfo Borrell, taking charge of the team.

The Omicron variant of coronavirus has resulted in record case numbers across Britain, forcing the postponement of many matches over the past month.

City are one of the few clubs not to have had a match called off yet and they have amassed a 10-point lead at the top of the Premier League.

The first leg of Liverpool’s League Cup semi-final against Arsenal, which had been due to take place on Thursday, was rescheduled after an outbreak forced Liverpool to close their training ground.

Dyche tested positive on Tuesday, the club said in a statement.

The Premier League announced on Monday that 94 positive cases were detected on 14,250 tests carried out on players and staff between December 27 and January 2.

It was the first week-by-week decrease in positive tests since early November, with a record 103 positives recorded the previous week.

None of the 32 FA Cup third-round ties set for this weekend have yet been postponed.