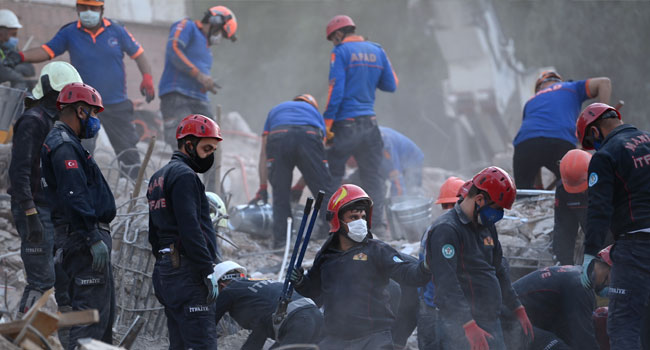 Rescuers pulled two children from the rubble in a town in Turkey on Monday, delivering hope nearly three days after a major earthquake hit the Aegean, killing 93 people and ruining dozens of buildings.

Local media showed a video of a little girl wrapped up in a foil blanket quickly taken to safety in the coastal town of Bayrakli — the hardest hit by the disaster — as rescue workers broke into applause.

Hours later, Turkish state television showed images of the girl, her right eye closed by a purple bruise, waving to the camera from her hospital bed, a doll resting on her chest.

Muammer Celik, a fireman who found and saved Elif, told AFP he thought the toddler was dead when he saw her lying on her back, covered by white dust.

“I asked for a body bag. I wanted to wipe the dust from her face and put out my hand towards her — and then suddenly she grabbed my thumb,” he recalled.

“We froze. We were crying with joy,” Celik said. “We forgot everything in that moment!”

A photo of Elif holding Celik’s hand went viral in Turkey. The fireman said she did not let go until she was taken to a tent for safety nearby.

Elif was the 106th person pulled out alive from collapsed buildings in Bayrakli and surrounding towns and cities in western Turkey.

Her mother and three siblings were pulled out on Saturday night, although her rescued brother later died, the TRT state broadcaster said.

AFAD also reported the rescue of 14-year-old Idil Sirin in Bayrakli, 58 hours after the quake hit.

But the Sirin family’s joy was brief as the lifeless body of Idil’s sister, Ipek, was found, the Hurriyet newspaper reported.

“I can’t hear any sounds from my sister, she’s dead,” Idil told rescuers as she was being pulled out, Hurriyet said.

Turkey’s toll from the quake is continuing to rise, with AFAD reporting 91 dead.

Nearly 1,000 people were injured and more than 150 were still in hospital.

Turkish Health Minister Fahrettin Koca tweeted that 10 of the wounded were in intensive care, including three in a critical condition.

Two teenagers were also killed on their way home from school on the Greek island of Samos, near the epicentre of the quake.

‘Can anyone hear me?’

Racing against time, rescue workers were pressing ahead with their desperate search for survivers in western Turkey more than 72 hours after disaster struck.

“Can anyone hear me,” one rescue worker cried through a megaphone down into the rubble.

“If you can, hit something or scream,” he called as a drone hovered overhead scanning the rubble.

Thousands of residents, including those with destroyed homes, spent a third night outside in tents in Bayrakli and in nearby Bornova, many fearing the risk of aftershocks.

Turkish authorities registered 1,286 repeat tremors by Monday afternoon — including 43 above magnitude four — complicating the rescuers’ works and raising the threat of further damage.

Launching an investigation into why 58 buildings were either heavily damaged or completely destroyed, Turkish police detained nine people — including contractors — in connection with the quake, state news agency Anadolu said.