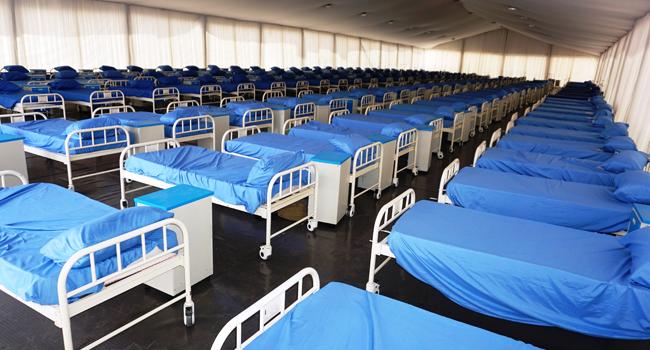 Kano State has one of the highest COVID-19 recovery rates in Nigeria, according to data from the Nigeria Centre for Disease Control (NCDC).

As of Sunday morning, June 5th, 2020, Kano has 1,264 cases of the virus out of which 1,024 have been treated and discharged, meaning the state has a recovery rate of 63 per cent, one of the highest so far in the country.

The data from the NCDC shows that of the reported number of infected persons in Kano State, 52 have died with 188 still active.

Although as at Sunday morning,  Lagos had the highest number of discharged COVID-19 patients in Nigeria – 1,653 –  the figure only accounts for about 15 percent of the 11,045 confirmed COVID-19 cases in the state.

On April 11, Kano confirmed its first case of the pandemic in a statement by the state’s Commissioner for Health, Aminu Tsanyawa.

According to the Commissioner, the patient was diagnosed at the reactivated COVID-19 laboratory test centre at the Aminu Kano Teaching Hospital.

The patient was then reportedly moved to the isolation centre in Kwanar Dawaki, Kano.

Almost a week later – April 16 -the Kano Government said it recorded its first death from the coronavirus (COVID-19) pandemic, with more infections discovered.

Few days later, there were speculations that the state has more deaths from the virus following a spike in fatality.

But the State Governor, Abdullahi Ganduje described the claims as untrue during an interview on Channels TV’s Politics Today.

“That information is not correct because we undertook some survey and investigation (about the initial report of 70 deaths),” he said.

“We found out that it was only 13 deaths in that place and we will soon get a complete report but I assure you that that information is not correct.”

He added that “looking at previous reviews, there is nothing to show that there is an unusual frequency of deaths.”

Following the dust the spike in death in Kano State generated, the Federal Government set up a Ministerial Task Team on a fact-finding mission to the state and five others.

Speaking after the visit of the team which he described as a game-changer, the Minister of Health, Dr Osagie Ehanire said the deaths recorded in Kano may have been ‘triggered’ by COVID-19.

“With regard to unexplained deaths in Kano which occurred in April, the team confirmed from graveyard records, that a total of 979 deaths were recorded in 8 municipal LGA in the state at a rate of 43 deaths per day, with a peak in the second week of April,” Dr Ehanire said during a briefing of the Presidential Task Force (PTF) on COVID-19,  Monday, June 8.

“By the beginning of May, the death rate had reduced to the 11 deaths per day it used to be.  The verbal autopsy revealed that about 56% of deaths had occurred at home while 38% were in a hospital. With circumstantial evidence as all to go by, investigation suggests that between 50-60% of the deaths may have been triggered by or due to COVID-19, in the face of preexisting ailments.”

Kano Labs ‘Back Up’

On April 29th, the NCDC reopened the testing laboratory for COVID-19 in Kano State.

The Director-General of the organization, Chikwe Ihekweazu said  this on his Twitter handle.

“Thanks to incredible efforts of a joint Team from @NCDCgov @KNSMOH @aminukanoth & our partners, the COVID-19 lab at AKTH, Kano is back up & testing has resumed,” he said.

“A 2nd lab at Bayero University Kano will be activated tomorrow.

On May 4th, Dr Ihekweazu said the agency is now focusing a lot of its energies on Kano, rather than Lagos, in its coronavirus response.

The agency’s DG said the focus was due to the “emerging issue in Kano.”

“It is not because Lagos is not important,” the NCDC boss said, adding that they will continue to support the state, which has the highest number of confirmed coronavirus cases.

“We have actually had a number of colleagues to stay there and ensure that things are working well,” the NCDC boss explained.

“The speed of testing is a little bit slower, but that is the price that we have to pay in order to get this up and running.”

He also banned street hawking and begging, adding that it was compulsory for residents to wear face masks in public places.

The governor declared that final year students could resume school while all civil servants from Grade Level 12 should resume work from Monday next week.

Kano State has been on lockdown since April 16 after the positive COVID-19 cases witnessed a significant rise.