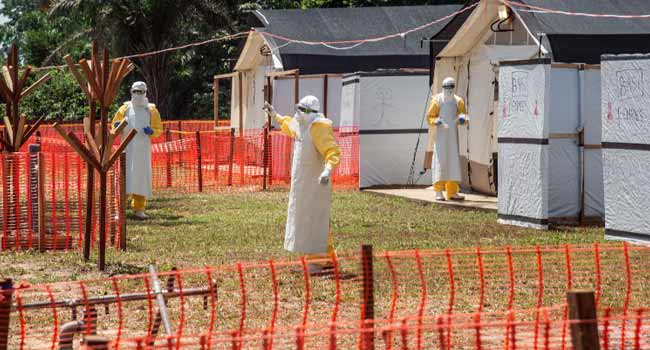 Three Ebola workers in eastern DR Congo have been killed, adding to the toll of people who have died fighting the nearly 16-month-old epidemic, a local UN source said Thursday.

A person working for the Congolese health ministry and two drivers were killed overnight Wednesday when an armed group attacked a complex in Biakato, Ituri province, where Ebola workers lived, the source said.

One person is reported missing and five others wounded, the source said.

Another attack, in Mangina, which is also in Ituri province, was repelled.

“Attacks by armed groups in Biakato Mines and Mangina in #DRC have resulted in deaths and injuries amongst #Ebola responders,” World Health Organization (WHO) chief Tedros Adhanom Ghebreyesus said in a tweet.

“We are heartbroken that our worst fears have been realised. Our focus is caring for the wounded and ensuring staff at other locations are safe.”

An outbreak of the much-feared haemorrhagic virus has killed 2,199 in North and South Kivu and Ituri provinces since August 1, 2018, according to the latest official figures.

It is the Democratic Republic of Congo’s 10th Ebola epidemic and the second deadliest on record after an outbreak that struck West Africa in 2014-16, claiming more than 11,300 lives.

Insecurity has complicated the epidemic from the outset, compounding resistance within communities to preventative measures, care facilities and safe burials.

On November 4, the authorities said more than 300 attacks on Ebola health workers had been recorded since the start of the year, leaving six dead and 70 wounded, some of them patients.

Vast tracts of eastern DRC are in the grip of armed groups, especially a shadowy militia called the Allied Democratic Forces (ADF).

The armed forces launched an offensive in the region on October 30, prompting a wave of massacres of civilians by suspected ADF men.

Ninety-nine people have been killed by armed groups in the Beni area alone since November 5, according to the not-for-profit Congo Research Group (CRG).

The bloodshed has sparked a wave of anger at the authorities and the UN mission in the DRC, MONUSCO. Seven people have died in protests since Saturday.