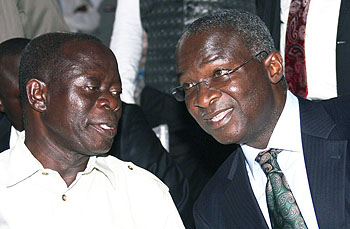 The second term of Adams Oshiomhole as Edo state governor started yesterday, as he and his deputy were sworn in at the Samuel Ogbemodia stadium in Benin City.

Amongst national leaders who attended the swearing-in of governor Adams Oshiomhole of Edo state was former Head of State; General Yakubu Gowon.

He said the scorecard of his administration was a clear demonstration that the state was working against the thinking of cynics that development was impossible in the state.

“Today, we are proud of our scorecard. With all sense of responsibility and humility, we make bold to say that we have comprehensively impacted the lives of our people in so short a time since the creation of this state. Within our limited resources and in spite of the financial deficits we inherited, we have touched communities and lives across the state.

“We are carrying out reforms in all sectors of governance and promoting a culture of respect for ‘value-for-money” in all transactions, respect for public property, beautification of the capital city, modernization of local government headquarters, and promoting political, leadership responsibility and accountability. We have paid special attention to the transformation of the rural areas and the empowerment of women and the youth.

“The results of our efforts are clear and we have received commendations from within and beyond Nigeria. We have always believed that our people deserve the best and we are committed, as a government, to providing the best at all times for them. I can say without hesitation that the best is yet to come.”

Others in attendance are governors from the Action Congress states and the National Leader of the party, Senator Bola Ahmed-Tinubu. 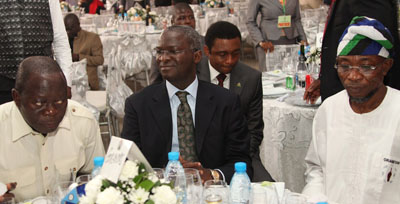 Lagos state Governor Babatunde Fashola has expressed optimism that the 2015 election will be based on issues, a clear departure from the past trend where electorates cast their votes on the ethnicity and other primordial sentiments.

Governor Fashola in an exclusive interview with our Edo State correspondent in Benin City was reacting to comments by Edo State governor on the voting pattern of Nigerians in previous elections.

Fashola said the recently concluded presidential election in the United States can be replicated in 2015 as Nigerians are gradually declaring their stand against bad governance through their votes evidenced by the number of incumbencies that lost elections recently.

On the part of INEC, the Chief Press Secretary to the national electoral body’s chairman, Kayode Idowu who was asked to rate the INEC on their recent assignment in Edo state.

Kayode said what’s in the recently concluded election in Edo state is not to see how the body faired but to note the mistakes made and lessons learnt from it so it can be factored into developing the electoral process next time.

There’s certainly no controversy on who should monitor the elections in Edo state as a civil society organization project swift count plans to deploy 834 observers for Saturday’s governorship polls.

Addressing journalists in Abuja, the first co chair of the organization, Mr. Dafe Akpedeyesays eight hundred observers will be deployed to selected polling units across the eighteen local government areas of the state, while thirty four others will move round all the polling stations in the state.

General Charles Arhiavbere has emerged the gubernatorial candidate of the PDP in Edo state.

Accredited voters were 725 while there were 4 void votes. The results however attracted protests from three aspirants who stomped out of the venue visibly angry.

Ken Imasuagbon said ‘we have no process’ while Osunbor said a statement will be issued in due course to express their views.

Is confident they will reclaim the mandate from ACN.