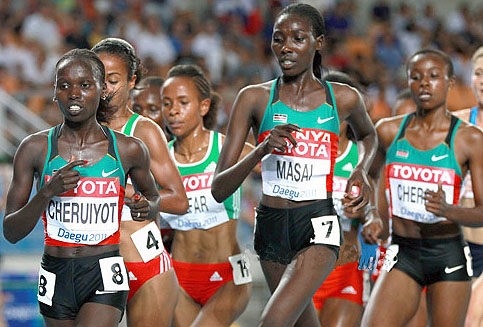 Four top athletes from Africa Vivian Cheruiyot, Pamela Jelimo, Kenenisa Bekele and Genzebe Dibaba were named among the major players for the 2012 Samsung Diamond League comprising of 14 meets taking place at Doha, Qatar and will be starting Friday 11 May.

The press conference for the meets was where it was announced by the organisers in Doha.

Bekele hails from Ethiopia and she is the World record holder for both 500 and 10,000m with 16 world titles from track and cross country in her kitty crowning with the being the reigning champion at both distance races.

Dibaba who is from Ethiopia had her first senior World title over 1500m in Istanbul, Turkey and she ended up putting up superb display this was after junior career World championship victories.

Cheruiyot from Kenya is the World Cross Country Champion and also the reigning World champion for the 500m and 10,000m as she put up a remarkable performance for the 2011 season.

Another Kenyan Jelimo is the 2008 Olympic 800m champion who bolted back fully from injury creating so much uproar at the past indoor season as she excelled at the World Indoor Championship which took place at Istanbul Turkey in March.

Abubakr Kaki a Sudanese who is two-time World Indoor 800 m champion who in Doha; Qatar clinched the silver medal was confirmed too and will do battle with 2007 World champion and Moroccan record holder Amine Laalou and Alfred Kirwa Yego from Kenya.