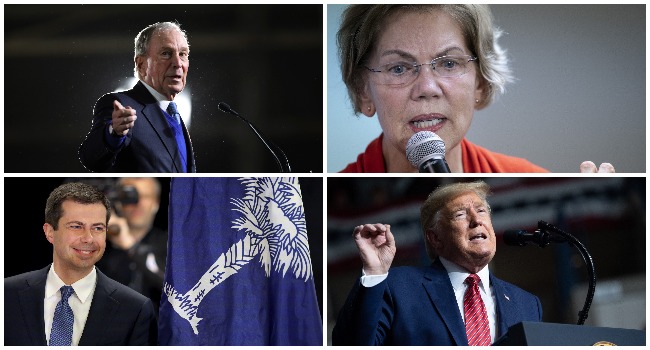 Advertising spending on the US presidential primaries has surpassed an “unprecedented” $1 billion, half of which came from the coffers of billionaire Democratic White House hopeful Michael Bloomberg, a tracking firm said Friday.

The former New York mayor, who was the ninth richest man in the world last year, has spent $539 million on television and radio spots, as well as digital ads, since launching his run on November 25, Advertising Analytics said.

With four months still to go before the Democratic convention, the spending has blown past the previous record of $338.2 million set by President Barack Obama during his 2012 re-election campaign.

Bloomberg is dipping into his personal fortune of some $60 billion, earning him sharp criticism from competitors who say he is trying to buy the election.

Tom Steyer, another billionaire competing to be the Democratic candidate to take on Donald Trump in the November election, has spent $186.1 million on advertising so far, Advertising Analytics said.

Senator Bernie Sanders, the current Democratic front-runner, is the top ad spender among non-billionaire candidates, thanks to his “prodigious fundraising ability,” the firm said.

He has been able to run television ads in key markets weeks ahead of his competitors, spending a total of $48.6 million so far.

In total, the Democratic candidates combined have spent $969 million, while Republicans have spent $67.9 million in advertising for their party primary, though the nomination of incumbent President Donald Trump is only a formality.

The Federal High Court sitting in Abuja has adjourned a suit challenging the campaign funding of President Muhammadu Buhari and the Presidential Candidate of the Peoples Democratic Party, Atiku Abubakar, to May 7.

The presidential candidate of the National Rescue Movement, Usman Ibrahim, who filed the suit wants the court to nullify the participation of the president and Atiku in the February 23, 2019, Presidential poll, because according to him, they spent more than was provided by the Electoral Act on their campaigns.

The suit was filed on behalf of the plaintiff by his lawyer, Ezekiel Ofou, who urged the court to invoke Section 91(2) of the Electoral Act, 2010 to nullify the participation of Buhari and Atiku in the poll for allegedly violating the electoral laws.

At a resumed sitting, the plaintiff’s counsel informed the court that the president and Atiku Abubakar had been duly served through substituted means as ordered by the court on March 5, but the president had no representation in court.

As a result of their absence, counsel to the plaintiff urged the court to deem the matter for hearing.

But being a suit commenced by way of originating summons, the presiding judge, Justice Ahmed Mohammed, observed that the defendants were still within the 30 days period for a party to file a response in a suit a position the defence counsel agreed with and urged the court to further adjourned the matter.

In a short ruling, Justice Mohammed said, “The court cannot fix a date for hearing since the defendants are still within time.

“On 22nd March, 2019, the 1st and 3rd defendants were served court processes by substituted means, and this shows they are within time to file processes.

“Consequently, the court has to adjourn the case to May 7, for further mention.”

The governor of Ekiti State, Ayodele Fayose says the APC-led administration is losing focus as it should first save Nigerians from the pangs of hunger and reduce the poverty that pervades the land.

Governor Fayose who said this in a statement released on Tuesday in Ado Ekiti, added that President Muhammadu Buhari’s government should concentrate on delivering the social welfare programme it promised Nigerians instead of coming after him.

“This project ‘Fayose must be implicated at all cost’ will definitely not put food on the tables of Nigerians and for all I care, the Economic and Financial Crimes
Commission and its collaborators can keep running from pillar to post while I keep delivering good governance to Ekiti and its people.” He said.

‘I got no Kobo from Obanikoro’

The governor also dismissed claims that former Minister of
State for Defence, Senator Musiliu Obanikoro confessed to the EFCC
that he received funds from the Office of the National Security Adviser
under retired Colonel Sambo Dasuki to fund his election.

“We have gone pass this stage of media trial, EFCC should rather keep its
gun powder dry, when we get to the bridge, we will cross it.

They said more than this in the 2006 poultry scam blackmail, despite that, I am
the governor today.” He said.

According to the statement signed by his Special Assistant on Public
Communications and New Media, Lere Olayinka, Governor Fayose said he
is reacting to these allegations to fulfill all righteousness.

He said “those who arranged the dramatic and compromised return of Senator
Obanikoro to Nigeria obviously did so in continuation of their project
‘Fayose must be implicated at all cost’ but I am not bothered because
my election was legitimately funded.”

A Challenge to EFCC

The governor also challenged the EFCC to probe the funding of the APC during the last general elections.

Governor Fayose said; “Since we are now in the era in which financial assistance from Nigerians to fund elections is being criminalised, the international community, especially those funding EFCC must insist that the commission probes the funding of APC elections before further funds are released to the commission.”