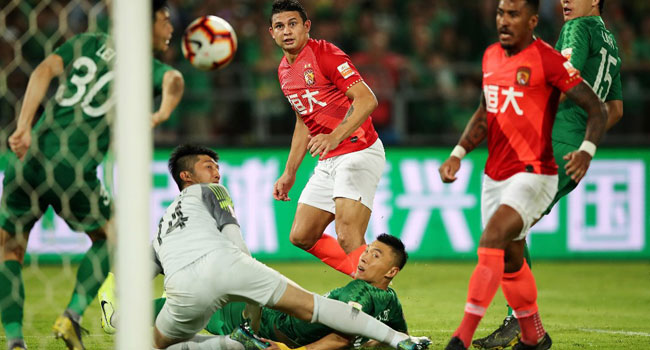 China named Elkeson in their squad for their opening World Cup qualifier with the Brazilian poised to be the first without Chinese ancestry to play for the country.

Coach Marcello Lippi has long complained about a dearth of attacking options and has moved to plug the gap with the 30-year-old, who will use the Chinese name Aikesen.

The move to naturalise a Brazilian is controversial and comes after China similarly gave a passport to London-born midfielder Nico Yennaris.

The former Arsenal man however is half-Chinese, whereas Guangzhou Evergrande striker Elkeson qualifies for China having played in the country since 2013.

Along with Espanyol forward Wu Lei and Yennaris, Elkeson is part of a 35-man squad named by Italian World Cup winner Lippi for China’s game at the Maldives on September 10.

Elkeson appears likely to be the start of a growing trend for perennial under-achievers China.

Fellow Brazilians Ricardo Goulart and Fernando are both reportedly set to be naturalised, along with English defender Tyias Browning, also of Evergrande.

Although many other nations, notably 2022 World Cup hosts Qatar, call up players born in other countries, China had resisted doing so until now.

But respected football commentator Zhan Jun recently hinted at public discord, writing to his 16 million followers on the Twitter-like Weibo: “Sigh, don’t know how the fans who care about Chinese football are feeling?

“I can’t get over it,” said Zhan, in a post which drew thousands of comments.