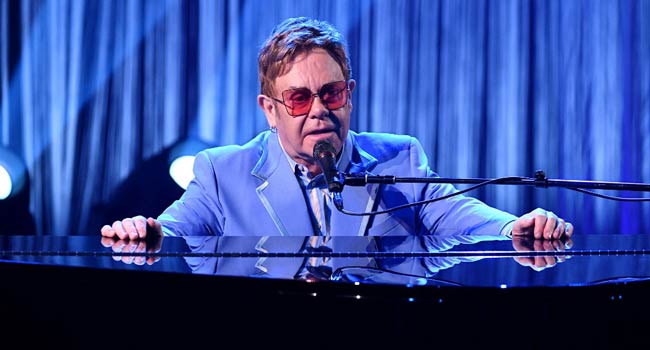 British rock legend Elton John says Watford football club was his unlikely saviour as he experienced the “worst period of my life” in the 1980’s.

The 72-year-old Englishman — known for his zany outfits when performing on stage and hits such as ‘Rocket Man’ and ‘Goodbye Yellowbrick Road’ — has been chairman of ‘The Hornets’ twice.

He says in his new autobiography ‘Me’ Watford “might have saved my life” in his first spell as chairman (1976-1990) when they enjoyed huge success under the late Graham Taylor rising from bottom of the old fourth division to the heights of being runners-up to Liverpool in the 1982/83 title race and beaten by Everton in the 1984 FA Cup final.

“I was chairman throughout the worst period of my life: years of addiction and unhappiness, failed relationships, bad business deals, court cases, unending turmoil,” he writes.

“Through all of that, Watford were a constant source of happiness to me.

“For obvious reasons, there are chunks of the eighties I have no recollection of -– but every Watford game I saw is permanently etched on my memory.”

John, who had a strip torn off him by Taylor when he turned up for a match after a “mammoth coke bender” and helped himself to several large whiskeys in the boardroom, said one game which was pivotal and made people aware of his team was a giant-killing act when they were a third-tier side.

“The night we knocked Manchester United out of the League Cup at Old Trafford, when we were still a third Division side, the newspapers that never normally bothered about writing about Watford were calling them Elton John’s Rocket Men the next morning,” he purrs proudly.

However, he admits his devotion to Watford earned him ridicule from both fellow rock stars — Rod Stewart queried his knowledge of football at joining such an unglamorous club’s board — and royalty.

Prince Philip, the husband of  Queen Elizabeth II, was typically blunt when he saw John — who at the time he first became chairman lived close to Windsor Castle — driving his Aston Martin painted in the Watford colours.

“Ridiculous. Makes you look like a bloody fool. Get rid of it,” said Prince Philip. 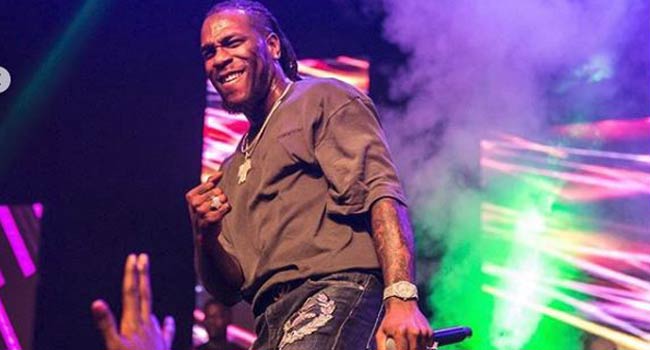 Nigerian music sensation, Burna Boy, seems to be getting more of the right attention as the days go by.

From having a swell time performing across the world, the Nigerian singer recently got a shout out by legendary music icon, Elton John, on his radio show.

The shout out stirred ecstatic reactions from the BET award winner.

READ ALSO: Why I Featured My Daughter In My New Music Video – Waje

Below is what he had to say about Elton’s shout out. 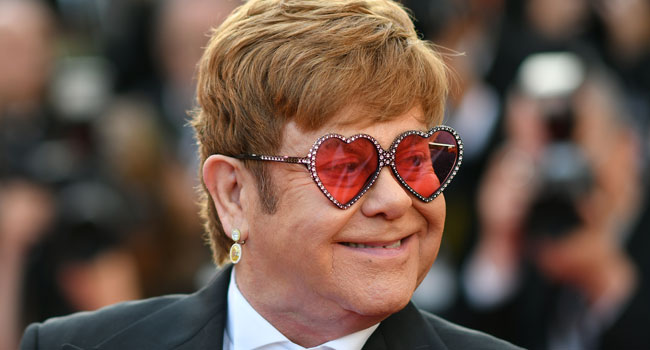 Elton John said Saturday that the hardest thing to watch in “Rocketman”, the biopic of his life that premiered at the Cannes film festival, were parts about his family life.

“It’s hard to watch the family stuff. The drugs stuff I can handle because I did it, but the family stuff is touching,” he told Variety in an interview on the warts-and-all movie about his wild rock ‘n’ roll years.

The film won an extended standing ovation in Cannes, with critics hailing its honesty and the way it deals frankly with the British singer’s struggles with drugs, alcohol and his own sexuality.

“Part of the reason I became the addict that I was (was) because of my background,” said the 72-year-old megastar.

“I really value the fact that (my parents) stayed together for me when they were unhappy with each other… I’ve come to understand the circumstances that they went through and I’m not angry or bitter about that whatsoever,” he said.

“But it did leave a scar and that scar took a long time to heal, and maybe it will never heal totally.”

John had a much-publicised eight-year feud with his formidable mother Shelia Farebrother, who he accused of trying to interfere in his life, but they buried the hatchet just before her death at the age of 92 in 2017.

An only child, John was raised by his grandparents until he was six before moving in with his parents. They divorced when he was 14.

The movie also explores the singer’s long and successful songwriting partnership with lyricist Bernie Taupin, which produced seven consecutive US number one albums between 1972 and 1975.

“The wonderful thing is the relationship I have with Bernie, which is the glue of the movie,” the singer said.

“We’ve been together for over 50 years and to have this relationship being so strong… means a lot in this kind of business that we work in.”

Britain’s Prince Harry joined pop star Elton John on Tuesday to launch a campaign to raise HIV awareness among men, warning that “dangerous complacency” about the virus threatened the quest to wipe it out.

The billion-dollar project “MenStar” will target men living with or at risk of HIV in sub-Saharan Africa, which has been ravaged by AIDS since the 1980s.

“The MenStar coalition is bravely tackling the root cause of this problem — the lack of awareness of HIV prevention amongst hard-to-reach young men,” Harry said at the 22nd International AIDS Conference in Amsterdam.

Speaking at the launch, which also featured South African actress Charlize Theron and Ndaba Mandela, the grandson of late President Nelson Mandela, Elton John said: “If we want to end AIDS once and for all, we must make men part of the solution.”

Around 36.7 million people around the world have HIV, according to 2016 figures cited by the United Nations’ HIV/AIDS body UNAIDS. Fewer than half of men living with HIV receive treatment compared with 60 percent of women, it said.

“It is time there was a global coalition to teach men to protect themselves. And in doing so, it will teach them to better protect not only their wives and girlfriends, their sisters and daughters, but also, critically, their brothers and their sons,” the British singer said.

UNAIDS said this month that the fight against HIV/AIDS was “slipping off track” and while deaths were falling and treatment rates rising, rates of new HIV infections threatened to derail efforts to defeat the disease. 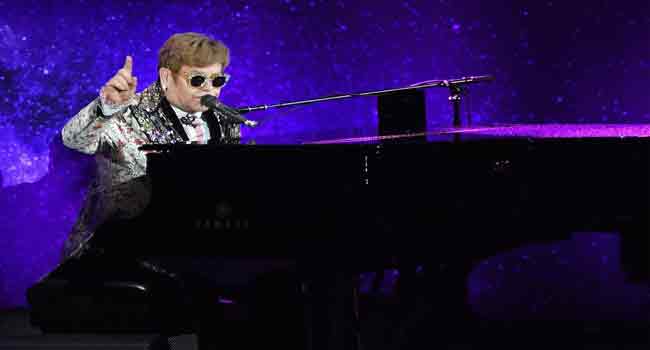 Elton John announced Wednesday that he is retiring from touring, with the consummate showman saying he wants to devote himself to his children — but after a final, massive swing around the world.

The 70-year-old British entertainer, revealing his plans at a gala New York event, said he planned to “go out with a bang” with a global tour that will open in September and last through 2021.

“It will be the last time that I’m touring and travelling the world, because my priorities have changed,” John told several hundred journalists and guests after a mini-concert and virtual reality presentation of his career.

Saying he has had an “amazing life and amazing career,” he added: “My priorities now are my children and my husband and my family.”

John, who in the 1980s became one of the first openly gay major celebrities, has two children with his husband, Canadian filmmaker and former advertising executive David Furnish.

The original “Rocket Man” said he had no health concerns, despite a scare with a bacterial infection that caused him to cancel South American dates last year. He said he would stay active, hoping to record more albums and write further musicals.

“I will be creative, hopefully, until the day I die,” he said.

Don’t let the sun go down on me

John, who closes his latest extravagant Las Vegas residency in May, said he was also open to concerts after the tour, but that they would likely only be in his native Britain.

He said he was more interested as a septuagenarian in taking his children to soccer practice than to traveling.

“I never thought that I could love anything as much as I love my sons. There’s not a word in the English dictionary that describes the love you have for a child,” he said.

The pop megastar said he remained excited by entertaining audiences — but was fed up with traveling, with his children often imploring him to stay home. “I’ve been in the back of a van since I was 16,” John said.

John made the announcement under the Roman-inspired dome and columns of Gotham Hall, a former bank turned event space in Midtown Manhattan, where guests were offered champagne and shrimp tempura hors d’ouevres.

The mini-biography starts in 1970 at West Hollywood’s Troubadour club, where the little-known pianist, born Reginald Dwight, electrified the audience. It then takes the viewer on stage with him at his legendary 1975 blowouts at Dodger Stadium in Los Angeles.

John promised that the upcoming tour would offer a similar show-biz pizzazz.

He has already shown his signature flair in Las Vegas, where he is one of the biggest entertainment attractions.

The pop legend’s latest Las Vegas show, “The Million Dollar Piano,” opened in 2011 and features an elaborate display through dozens of video screens. It followed a separate Las Vegas residency, “The Red Piano,” from 2004 to 2009.

John, often known as Sir Elton after a knighthood by Queen Elizabeth II, has generated decades of hits such as “I’m Still Standing,” “Rocket Man,” “Don’t Let the Sun Go Down on Me” and “Can You Feel the Love Tonight.”

His style brought together the old-school rhythm-and-blues piano of early rock ‘n’ roll with Gospel influences as well as a solid grounding in classical music.

The artist has also earned a fortune as a composer for musicals including blockbuster “The Lion King,” “Billy Elliot” and the upcoming adaptation of “The Devil Wears Prada.”

After struggles in the past with addiction and depression, John’s last studio album, “Wonderful Crazy Night,” carried a palpable sense of joy. Last year he put out a greatest hits collection dubbed “Diamonds.” 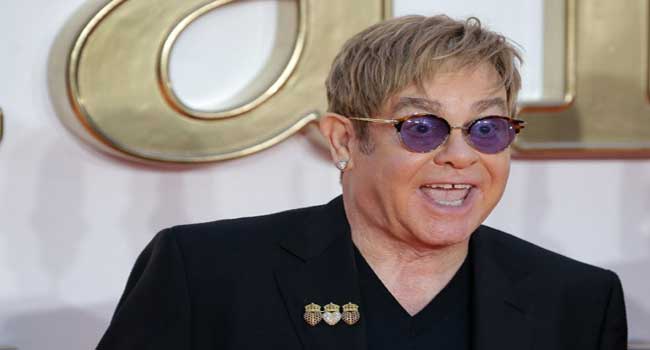 Elton John, one of the major musical draws to Las Vegas, will end his residency at Caesar’s Palace next year, the casino announced Monday.

The British pop legend will on May 19 close “The Million Dollar Piano,” his show since 2011 at the casino’s Colosseum theater in which he performs his hits to an elaborate visual display that includes dozens of video screens.

Announcing the close of the residency, Caesar’s Palace said John will have performed 207 shows. It was his second residency at the casino after his 243-show “The Red Piano” from 2004 to 2009.

John returned to the Vegas residency last week after canceling dates earlier this year due to a bacterial infection he contracted while touring South America.

There were no indications of lingering health concerns for the 70-year-old, who since the infection has gone on to tour Europe and Australia.

With a string of chart-topping hits reaching back 40 years, the “Rocket Man” remains one of the highest-grossing musicians in the world both on the live circuit and in record sales, with a new box-set due for release next month.

Las Vegas residencies — often with ornate stage set-ups as there is no need to take the show on the road — are major income generators for veteran artists, with Jennifer Lopez recently extending her concerts into 2018.

It remains to be seen if tourism, the key industry in Las Vegas, will be affected by the October 1 massacre that saw a local man open fire from his hotel window on a country music festival, leaving 58 people dead.