The Candidate of the All Progressives Congress (APC) in the concluded Delta Central Senatorial election, Mr O’tega Emerhor, has called on the Independent Electoral Commission (INEC) to exercise full control on its ad-hoc staff to ensure transparency in the electoral process.

Speaking on Sunday on a Channels Television Programme, ‘Politics Today,’ Mr Emerhor insisted that there were irregularities in the election won by the Peoples Democratic Party’s (PDP) candidate, Emmanuel Aguariavwodo.

” October 12 election was unbelievable. I have released a statement and the same has been adopted by my party in respect of what transpired as captured by our agents,” he said.

“There was military shut down. This prevented people from being able to cast their votes as they should.”

He stated that INEC had out-sourced its role to ad-hoc staff it cannot control and that it had resulted in indiscipline.

“We need an INEC that has integrity. They should use their own staff to organise elections to ensure that the process is not hijacked. If they are using ad-hoc staff, they should discipline them. Until they position themselves to be truthful and follow the right process in conducting an election, there will not be a credible election,” he emphasised.

He stressed that the security agents role during an election should be to provide a level playing ground.

” It is their responsibility and they cannot be compelled to do otherwise. INEC should determine if the security agents provide a level playing field as supposed, the APC candidate said.

Addressing reporters after the Senatorial election, the governor of the State, Dr. Emmanuel Uduaghan of the PDP pointed out that there were no reports of violence during the election. He said that the securities were only concerned with providing security during the election.

INEC says the election was free and fair but Mr Emerhor also insisted that INEC was only interested in its image and not on the credibility of the election.

The APC has also hinted of its readiness to contend the result of the election. 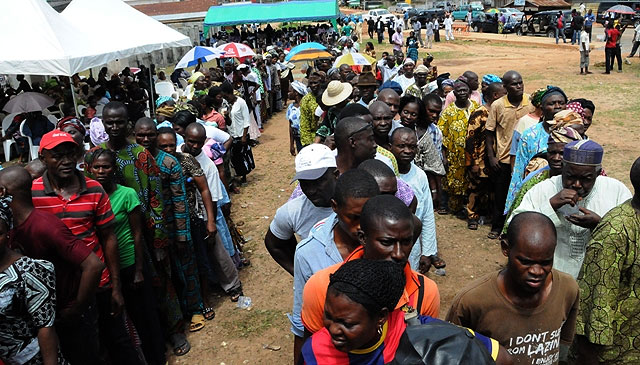 The People’s Democratic Party (PDP) candidate for the Delta Central Senatorial bye-election, Emmanuel Aguariavwodo, has been declared winner of the election.

According to the INEC returning officer, Professor Arubayi Blacky John, the PDP polled 263,024 votes while APC came second with 29,075 followed by the DPP with 29,055 votes.

Meanwhile the APC has accused the PDP of using security agents to intimidate voters.

The opposition alleged that the PDP prevented voting materials from reaching polling units in opposition strongholds during the election yesterday.

A statement issued by the APC interim National Publicity Secretary, said reports from its agents on the field indicated that armed soldiers and policemen were deployed strategically to intimidate voters, while trailers and tankers were used to block the roads leading to the opposition strongholds, thereby preventing voting materials from reaching there.

Earlier on yesterday, party agents had complained about logistic problems bedeviling the exercise.

The poll became necessary after the death of Senator Pius Ewherido on June 30, 2013.  The Late Senator Ewherido won the seat in 2011 on the platform of the Democratic People Party, DPP, which fielded Ede Dafinone as its candidate in yesterday’s poll.