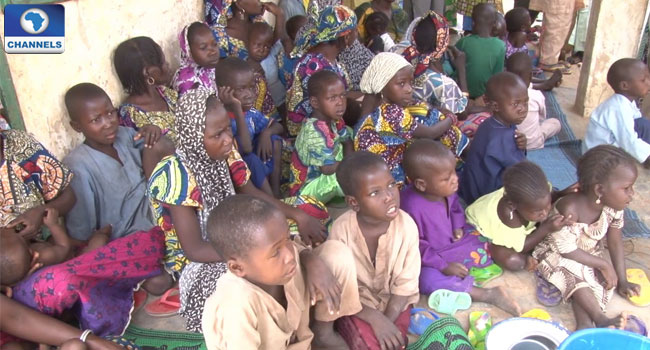 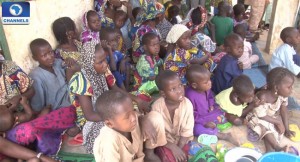 A total of 61 critically malnourished infants have been hospitalized in Maiduguri, the capital of Borno State in Northeast Nigeria.

This was on the orders of Borno State Governor, Kashim Shettima after he relocated for medical care, the 478 children and 219 adults, who were rescued from Boko Haram by the Nigerian military.

The victims, all of whom were malnourished due to two years captivity in the hands of Boko Haram insurgents, were moved from Bama to a special care unit in Maiduguri on Monday.

The Spokesman to Governor, Mr Isa Gusau, gave the details in a statement on Tuesday.

The adults consist of 196 women, some of whom gave birth to part of the 478 children. The rest of the adults are 23 men who looked thin.

The victims were among those rescued by the military in continued operations against Boko Haram insurgents who in the last six years attacked communities, killing residents and abducting many.

Dozens of buses conveyed them to the newly opened special care unit in Maiduguri.

The 61 infants, now hospitalized at Umaru Shehu Specialist Hospital, owned by the State Government in Maiduguri, are undergoing medical care arising from extreme deprivation of food.

After ordering Health and Emergency Management Agency staff to set up the special unit on Monday night, Governor Shettima was at the unit on Tuesday to meet the kids and parents.

The Governor mobilized workers on water and sanitation, environment and other senior government officials. He also supervised administration of care to the children and the parents.

“Anyone that shows sign of being in critical health condition should be sent for medical admission on Government shoulders. Food and water must be constant and so should medical staff and drugs at the unit. I will monitor every step of what happens here,” Shettima told the staff.

There were also volunteers from Empower 54, a US-based humanitarian organization led by a Benin Princess, Modupe Ozolua.

According to the Governor’s spokesperson, Ms Ozolua played a key role in working with the Borno State Government since the past weeks and she accompanied government officials to Bama on Monday to convey the 697 victims to Maiduguri.

At the special care unit were members of the Dangote ‎Foundation who immediately donated food items.

There were officials from the United Nations Office on Coordination of Humanitarian Affairs and so were members of the International Committee of the Red Cross and Red Crescent and those from UNICEF.

Everyone wanted to help as they were inspired by Governor Shettima’s two hours supervision at the special unit.

The Governor went to see the victims who stayed under trees along Maiduguri-Dikwa road on the outskirts of Maiduguri.‎

The villagers, said to be in their thousands were rescued around Mafa and Marte after a recent raid by the military.

They were trapped due to insurgency activities on the routes to their villages, they told the Governor.

Shettima not only ordered that a new camp be opened for them but he waited for four hours, supervising the creation of the camp and ensured that the rescued persons had settled in the camp.

He ordered construction of boreholes and restrooms while a medical unit would also be set up.

The Governor was concerned about security around the new camp but he was assured by soldiers that there was no cause for worry.