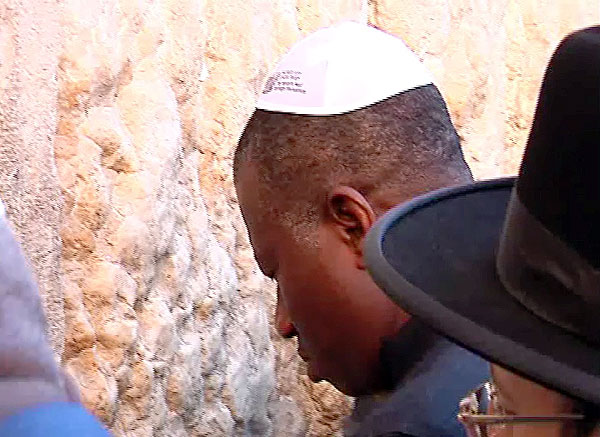 Nigerian President Goodluck Jonathan along with his entourage has kicked off his holy pilgrimage to Israel with a tour of some holy sites in Jerusalem.

The tour was used as a rededication by the President to the development of the country.

The President also took time to tour the holy sites within the walls of old Jerusalem.

The walk down the way of the cross in particular was used by the president to make supplications on behalf of the country.

On the first day, the tour started with a visit to the garden of Gethsemani, the Upper Room in Mount Zion and the Church of St. Peters, where Peter was said to have denied Jesus.

Supplications were made in Chapels to mark every holy site by Christian Ministers, as they prayed for the President, as well as the unity and continued existence of the country back home.

The second day of President Jonathan’s tour started with the Wailing Wall in the Old City of Jerusalem and the President was received by the Rabbi of the Wall, who led the pilgrims to offer supplications.

President Jonathan was led afterwards to the tunnels underneath the Wall to the Station of the Cross, which marked Jesus’ travails from the seat of Pontus Pilate to the Calvary.

The journey ended at the Church of the Holy Sepulchre, with President Jonathan offering prayers at every station along the way.

The experience no doubt awakens the sense of sacrifice in officials in the President’s entourage and perhaps an obligation to leave their country better for the next generation.

It will be recalled that the President left Nigeria for the year’s holy pilgrimage on Thursday 23rd October.

According to a statement by the Special Adviser to the President (Media & Publicity), Reuben Abati, the President will also be meeting with President Shimon Peres, Prime Minister Benjamin Netanyahu and members of the Israeli Parliament, the Knesset.

There will also be talks between President Jonathan’s delegation and the Israeli government officials, with a focus on the enhancement of bilateral relations between Nigeria and Israel in areas of trade, economic development, infrastructure, transportation, agriculture, communications, culture, education and tourism.

According to the statement, President Jonathan will also be meeting with the President of the Palestinian National Authority, Mr. Mahmoud Abbas.

The President, who is expected to be back in the country next week, may meet and interact with some other Nigerians who are already in Israel for the holy pilgrimage.