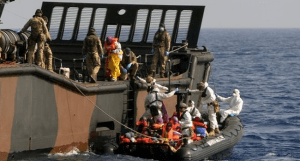 The European Union (EU) Foreign and Defence Ministers are expected to approve a mission to destroy the boats used by people-smugglers operating in Libya.

At a meeting in Brussels, the Ministers will also discuss the mission’s command-and-control structure and headquarters.

This is part of the EU’s response to the vast number of illegal migrants from Africa and the Middle East crossing the Mediterranean Sea to reach Europe.

Report suggests that more than 1,800 migrants have died in the Mediterranean in 2015. This is a 20-fold increase on the same period in 2014.

On arrival for the meeting, EU Foreign Policy Chief, Federica Mogherini, said: “Today the main point will be taking the decision to establish the operation, the EU operation at sea to dismantle the criminal networks that are smuggling people in the Mediterranean”.