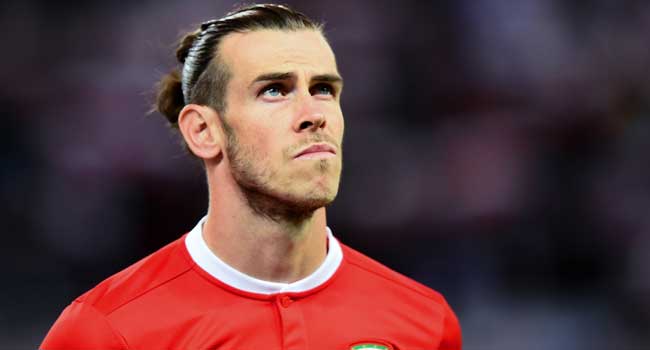 Wales star Gareth Bale admitted he is relieved to be available to face Croatia in Sunday’s crucial Euro 2020 qualifier after escaping a red card in Slovakia.

Bale had already been booked when he fouled Slovakia defender Milan Skriniar in the closing stages of the 1-1 draw in Trnava on Thursday.

The Real Madrid forward could have been shown a red card that would have ruled him out of the Croatia clash in Cardiff.

But he was also hurt in the collision and spent a couple of minutes needing treatment before play resumed with no punishment.

“I’m fit and I’m fine, it was just a knock on the knee and a bit of ice has sorted that out,” Bale said on Saturday.

“I was more worried about getting sent off to be honest. I was just happy to get away with that one!

“But saying that, I didn’t think the first one deserved a yellow, so maybe it evened itself out.”

Wales, who trail Group E leaders Croatia by six points and are three adrift of second-placed Slovakia, with a game in hand on both, finish their campaign with November games against Azerbaijan and Hungary.

“I can’t make too many silly tackles, I have to be mindful of that,” Bale said.

“I don’t want to miss any games for Wales, especially at the crunch time of the group.

“So I have to be clever with what I’m doing, but maybe expect someone’s going to rile me to get me suspended.

“I’m experienced enough to get through the period without picking up another booking.”

Wales have failed to win in five previous encounters with Croatia and Bale would love to end that run against his Real team-mate Luka Modric.

“We know each quite well, as we’ve played together for a long time in Tottenham and Real Madrid, and it would be nice to get one over on him finally,” Bale said.

“We’ve not spoken yet, maybe there will be a little message later on.

“They’ve beaten us a few times in the past, but it’s always been a tight game between us.

“We know what a great team they are. They had a great World Cup and shown year after year how good they are.

“But playing at home gives us an advantage and we’ve had some great results against some big teams in our stadium.”

Wales will make a late decision on Aaron Ramsey’s fitness after the Juventus midfielder, who is yet to feature in the Euro 2020 qualifying campaign, missed the Slovakia game while he recovers from a thigh problem.

“We have not ruled Aaron out. He’s on a different schedule, he didn’t travel to Slovakia with the team and stayed back with the physio,” Wales manager Ryan Giggs said.

“So we’re just giving him all the time we can and (will) see how is in the morning (on Sunday).” 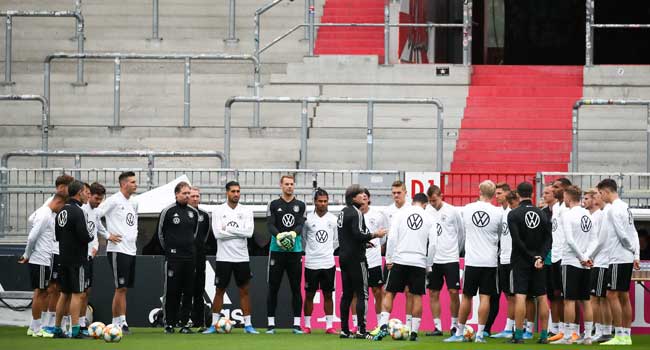 Joachim Loew’s resurgent Germany face their first test without Manchester City winger Leroy Sane when they renew their rivalry with neighbours the Netherlands in Friday’s Euro 2020 qualifier in Hamburg.

Sane, 23, is one of several German players missing through injury after he tore knee ligaments during City’s Community Shield win over Liverpool last month.

The twinkle-toed winger has been a key part of the national team’s recovery from their World Cup debacle last year, scoring in five of Germany’s last six games.

Two of those goals have come against Friday’s opponents the Netherlands, who Germany have faced three times since last October in a resumption of one of international football’s biggest rivalries.

Yet Sane’s team mates insisted this week that they would be able to compensate for his absence.

“Leroy creates a lot of space and is very important for the team, but we have a lot of quality to replace him,” said Borussia Dortmund player Marco Reus on Wednesday.

Sane is expected to be replaced by in-form RB Leipzig striker Timo Werner, who is hoping to fight his way back into the Germany first team.

“Leroy’s unfortunate injury means there is a space in attack. I believe I can show the same performances here as I have for my club,” said Werner, who has scored five goals in three games for Leipzig this season.

“It’s a shame because, for a young team, it is important to play regularly together in the same formation,” said Loew Thursday.

Having twice failed to beat the Dutch in the Nations League last year, Germany’s 3-2 win in Amsterdam in March marked a change in fortunes and left them six points clear of their rivals in qualifying Group C.

Victory in Hamburg would therefore represent a huge step towards qualification, adding further spice to the cross-border derby.

“Games against the Netherlands are always big, iconic games. You stand on the pitch and think: ‘awesome’,” said Reus.

For the Dutch in particular, the location of Friday’s match is a fateful one.

It was in Hamburg that Marco Van Basten fired a late winner past West Germany to send the Netherlands into the final of the 1988 European Championships, where they won their only major title to date.

Now 31 years later, the Dutch are under pressure after picking up just three points from their first two games.

They currently sit in Group C’s play-off spot, nine points behind leaders Northern Ireland, albeit with two games in hand.

Yet at a press conference Monday manager Ronald Koeman dismissed the notion that the match against Germany was a case of do-or-die for his team.

“The game against Germany is not crucial,” said Koeman, who played in the 1988 semi-final and famously pretended to wipe his backside with a German shirt after the match.

“We have to get 12 points in the matches against Estonia and Belarus and pick up more points than Northern Ireland in our two games with them.” 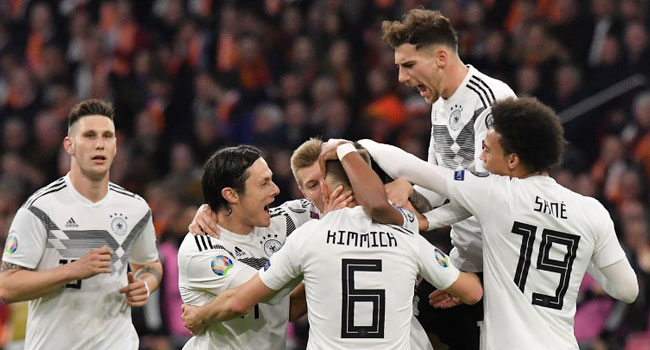 Nico Schulz’s 90th minute winner fired Germany to a dramatic 3-2 victory over the Netherlands in their opening Euro 2020 qualifier on Sunday, lifting the pressure off coach Joachim Loew.

It was Germany’s first win in a competitive game since last year’s World Cup and came after a game in which Loew’s side showed strength and fragility in equal measure.

The Germans were magnificent in the first 45 minutes in Amsterdam but were outplayed in the second half as the Dutch came back from 2-0 down against their rivals for the second time since November.

Yet Schulz prodded in a last-gasp winner against the run of play to hand Germany the win.

Germany burst out of the blocks and Dutch goalkeeper Jasper Cillessen had to beat away a fierce shot from Serge Gnabry after just two minutes.

With a quarter of an hour gone, the visitors took a deserved lead when Schulz burst up the left wing and found Leroy Sane with a low cross. As Dutch defender Matthijs de Ligt slipped on the turf, Sane slipped away and smashed the ball past Cillessen.

The Dutch looked equally dangerous at the other end, however, and the veteran Ryan Babel forced two outstanding saves in quick succession from Manuel Neuer.

But the Johan-Cruijff-Arena fell silent when Gnabry found the top corner with a breathtaking strike from the edge of the box on 35 minutes.

The hosts responded furiously after the break and De Ligt made up for his earlier error by flicking a Memphis Depay cross past Neuer to make it 2-1.

With just over an hour gone, Lyon forward Depay squeezed a shot through a crowded box to level the scores.

The Netherlands looked the more likely winners for much of the rest of the game, until Schulz popped up in the box late on to steer in the winner and crown a thrilling match.