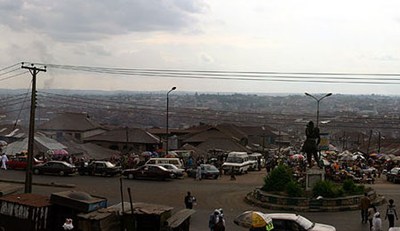 Not less than 20 communities in the capital of Oyo state, Ibadan, have been plunged into darkness following a 3-hour rainstorm that destroyed several Power Holding Company of Nigeria (PHCN) installations in the city, living some persons dead and many others injured and homeless.

The rainstorm which started around 11pm Sunday night and lasted about 3hours , caused monumental damage to homes, schools, markets, places of worship, and other business premises.

Several power lines installed by PHCN were also destroyed leaving about 20 communities without power in the ancient city.

The Assistant General Manager Public Affairs Ibadan Distribution Company, Mr. Jide Oyenuga, confirmed that areas like Apata , Mokola, Felele have been plunged into darkness as a result of the rainstorm and disclosed that inventory is still being taken for other affected areas within the city.

Residents who spoke to Channels Television explained that the whirlwind which preceded the rain started suddenly and lasted only 20 minutes before the rains came in torrents.

At one of the affected local government areas, the transition chairman of Oluyole local government, Honourable Ayodeji Abass Alesinloye sued for calm among residents and called on the federal and state governments to assist the displaced.

Though the magnitude of the storm is yet to determined, it has been described by many as the fiercest yet, as it hauled almost everything within its trajectory for 20 minutes and ushered in rain that poured for 3 hours unabated.

The Oyo state capital has in the last two years recorded massive flooding that has destroyed property and displaced a number of people.