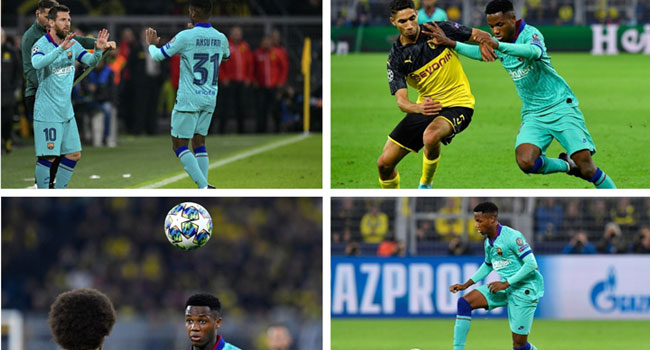 Barcelona’s 16-year-old starlet Ansu Fati was granted Spanish citizenship on Friday, a government spokeswoman said, meaning he will be able to represent Spain at international level.

Prime Minister Pedro Sanchez’s cabinet approved a request made by the justice minister to give the Guinea-Bissau-born forward Spanish citizenship during its weekly meeting, the spokeswoman said.

Fati was just seven years old when he moved in 2009 to Spain from the impoverished west African nation with his family and his startling talent meant he was invited to join Barcelona’s prestigious youth academy La Masia aged 10.

The player qualified for citizenship because he had completed the required 10 years of residency in Spain.

Spain’s national coach Robert Moreno described Fati’s full debut for Barcelona last weekend as “mind-blowing” after he scored one goal and set up another in a 5-2 win over Valencia.

His first major tournament for Spain could come at the Under-17 World Cup in Brazil, which begins on October 26 and ends on November 17.

Barcelona coach Ernesto Valverde said Friday it would be a “setback” for Barca if Fati goes to the tournament, when he could miss seven games for his club.

“We will wait for him to be called up first,” said Valverde. “But it would be a setback because he is a player that is contributing a lot to us at the moment.”

Asked if he would try to persuade Fati to remain with Barcelona, Valverde said: “I don’t think he will ask me for advice about it and I don’t like giving advice very much because in football the things you know are learned by experience. Everyone has to make their own decisions.”