The heads of top U.S. spy agencies are to testify before Congress about possible links between Russia and President Donald Trump’s election campaign.

They would also address Mr Trump’s claim that he was wiretapped by Barack Obama.

The Federal Bureau of Investigation (FBI) Director, James Comey, and the National Security Agency (NSA) Admiral, Mike Rogers, would speak at a rare open hearing of the Congressional Intelligence Committee.

Earlier, Russia had denied trying to influence the election, while Mr Trump denounced the investigation as a “total witch hunt”.

In January, U.S Intelligence Agencies said they believed Kremlin-backed hackers had broken into the email accounts of the senior Democrats and released embarrassing information in order to help Mr Trump defeat Hillary Clinton. 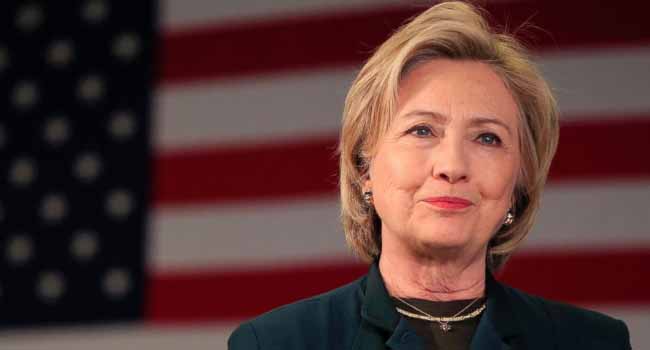 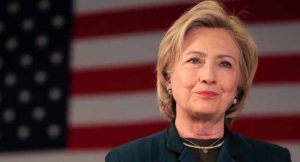 Hillary Clinton blamed FBI director James Comey for her stunning defeat in Tuesday’s presidential election in a conference call with her top campaign funders on Saturday, according to two participants who were on the call.

Clinton was projected by nearly every national public opinion poll as the heavy favorite going into Tuesday’s race. Instead, Republican Donald Trump won the election, shocking many throughout the nation and prompting widespread protests.

Clinton has kept a low profile since her defeat after delivering her concession speech on Wednesday morning.

Clinton told her supporters on Saturday that her team had drafted a memo that looked at the changing opinion polls leading up to the election and that the letter from Comey proved to be a turning point.

She said Comey’s decision to go public with the renewed examination of her email server had caused an erosion of support in the upper Midwest, according to three people familiar with the call.

Comey sent a letter to Congress only days before the election announcing that he was reinstating an investigation into whether Clinton mishandled classified information when she used a private email server while secretary of state from 2009 to 2012.

Comey announced a week later that he had reviewed emails and continued to believe she should not be prosecuted, but the political damage was already done.

Clinton told donors that Trump was able to seize on both of Comey’s announcements and use them to attack her, according to two participants on the call.

While the second letter cleared her of wrongdoing, Clinton said that it reinforced to Trump’s supporters that the system was rigged in her favor and motivated them to mobilize on Election Day.

The memo prepared by Clinton’s campaign, a copy of which was seen by Reuters, said voters who decided which candidate to support in the last week were more likely to support Trump than Clinton.

“In the end, late breaking developments in the race proved one hurdle too many for us to overcome,” the memo concludes.

A spokesperson for the FBI could not immediately be reached for comment.

On the phone call, Dennis Chang, who served as Clinton’s finance chair, said her campaign and the national party had raised more than $900 million from more than 3 million individual donors, according to the two participants who spoke to Reuters. 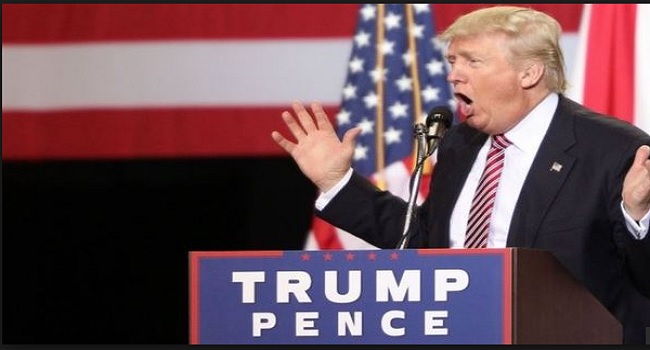 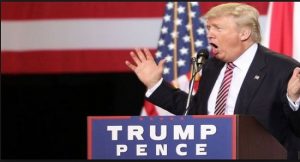 Donald Trump has accused the FBI of dishonesty after it once again exonerated his rival, Hillary Clinton, of criminal conduct on her emails.

The FBI director said a fresh inquiry into the Democratic candidate’s communications, found nothing to change the bureau’s conclusion this summer.

Government officials told U.S media that investigators had established that the newly found emails were either personal, or duplicates of correspondence they had previously reviewed.

The Clinton campaign said it was “glad” the lingering issue had been resolved clearing all allegations of criminal activity.

This comes shortly after they had accused FBI Director, James Comey of “blatant double standards” over the inquiry into Hillary Clinton’s email use.

At a rally in the Detroit suburbs, Mr Trump insisted his rival Hilary, is guilty and it would have been impossible for the FBI to review what was reported to be as many as 650,000 emails in such a short time.

“Hillary Clinton is guilty, she knows it, the FBI knows it, the people know it and now it’s up to the American people to deliver justice at the ballot box on November 8.”

As the final day for the U.S election looms, the latest opinion polls on Sunday, gave Mrs Clinton a four to five-point lead over Mr Trump. 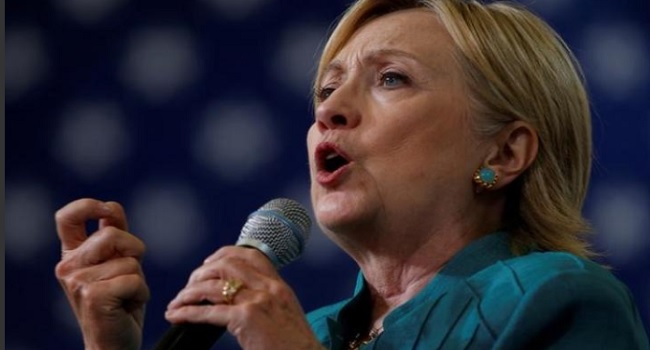 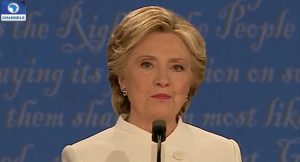 The Clinton campaign has accused FBI Director, James Comey of “blatant double standards” over the new inquiry into Hillary Clinton’s email use.

The comments come after media reports surfaced that Mr Comey had urged against publicly accusing Russia of interfering in the US election, including alleged email hacking.

They claim that he had sought to withhold evidence of Russian support for Donald Trump for fear of influencing the US election.

Reports say Mr Comey’s concern about releasing the information was due to the proximity to the election.

The statement that Mr Comey reportedly declined to sign off on was released by the Department of Homeland Security and the Office of the Director of National Intelligence on October 7.

“It is impossible to view this as anything less than a blatant double standard,” Clinton’s campaign manager, Robby Mook told reporters, claiming the decision “defied all logic”, especially as other intelligence agencies had favoured disclosure of suspected Russian involvement.

“Through these two decisions he shows he favours acting alone and without consulting … these are not the hallmarks of a responsible investigation,” added Mook.

The FBI has, however, refused to comment on the reports. 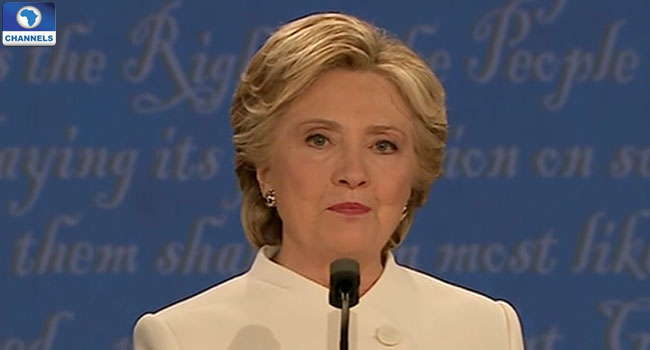 Hillary Clinton on Saturday challenged FBI Director James Comey to provide a fuller explanation of investigative steps he is taking related to her use of a private email server, as the Democratic presidential candidate accused him of “deeply troubling” behavior 10 days before the U.S. elections.

Speaking to volunteers in Daytona Beach, Florida, Clinton said: “Some of you may have heard about a letter the FBI director sent” on Friday to the U.S. Congress informing it that the agency is again reviewing emails.

Comey had decided in July that the FBI was not going to seek prosecution of Clinton for her handling of classified materials on a private email server while she was secretary of state.

“It is pretty strange to put something like that out with such little information right before an election,” Clinton said, adding, “It’s not just strange, it’s unprecedented and it’s deeply troubling because voters deserve to get full and complete facts.” She urged Comey to “put it all out on the table.”

In tandem with Clinton, fellow Democrats on Saturday also worked to pressure Comey to provide details on a controversy that dominated the presidential campaigns on Saturday, less than two weeks before the Nov. 8 elections.

At a press conference in Columbus, Ohio, the Congressional Black Caucus, comprised of about 45 members of the House of Representatives, nearly all Democrats, also urged Comey to be more forthcoming.

Sources close to the investigation on Friday said the latest emails were discovered as part of a separate probe into Anthony Weiner, the estranged husband of top Clinton aide Huma Abedin.

Weiner, a former Democratic U.S. congressman from New York, is the target of an FBI investigation into illicit text messages he is alleged to have sent to a 15-year-old girl in North Carolina.

Republican presidential candidate Donald Trump pounded away at the new FBI development, devoting a large part of a campaign speech in Golden, Colorado, to attacking Clinton and arguing that she is not to be trusted with the presidency. 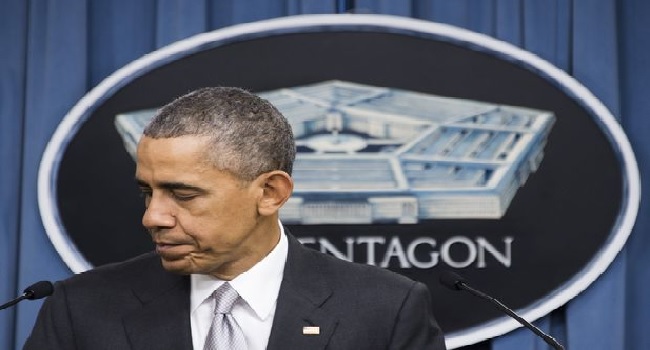 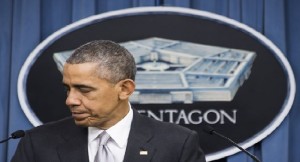 President Barack Obama is to widen background checks on buyers of firearms to tighten gun laws in the United States.

The plans will be announced on Tuesday by the President, despite opposition from congress to new gun laws.

All sellers, who operate online or at gun shows, will be forced to conduct background checks on potential buyers.

But republican presidential candidate, Rand Paul, said that he will fight the action of the executive “tooth and nail”.

Many of his republican rivals also said that they will erase the measures “on day one” if they win the White House.

But President Obama said that his new measures would be within his legal authority and consistent with the second amendment, which grants Americans the right to bear arms.

He told the BBC last year that his failure to pass effective gun laws was his biggest regret.