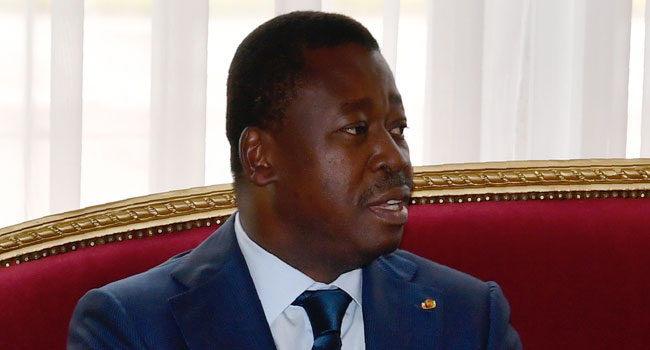 Six candidates will run against Togo’s President Faure Gnassingbe in a presidential election next month, the Constitutional Court said Friday.

The West African country was plunged into political crisis in 2017 and 2018 as protesters demanded term limits for Gnassingbe, who took power in 2015 after his authoritarian father had ruled for 38 years.

However, last year parliament voted for a constitutional change that allowed Gnassingbe, who first became head of state in 2005, to run for a fourth term in the February 22 vote.

He will need to beat six candidates, including Jean-Pierre Fabre, veteran opposition leader and president of the National Alliance for Change (ANC), and Kodjo Agbeyome, head of the Patriotic Movement for Democracy and Development (MPDD).

Fabre alleged massive fraud after he was defeated by Gnassingbe in the last election in 2015, rejecting the official result.

But the Constitutional Court said on Friday that two of the candidates had an insufficient number of voter signatures, while a third withdrew from the race.

Tens of thousands of people took to the streets in 2017 and 2018 in demonstrations that were violently repressed by security forces, with 15 killed and hundreds arrested, according to unofficial figures.

Around 10,000 police officers and security members of the Presidential Election Security Force (FOSEP) will be deployed across the country to ensure the safety of the February vote.

The Supreme Court will on May 4, 2017 hear the objections filed against the hearing of an appeal brought before it by the Ahmed Makarfi led National Caretaker Committee of the People’s Democratic Party (PDP).

The motion challenging the competence of Makarfi’s appeal was filed on behalf of the PDP by Mr. Latif Fagbemi and another motion filed by Senator Ali Modu Sheriffs lawyer, Mr. Akin Olujimi for the same purpose.

The two motions dated March 16 and 21, 2017 are asking the Apex court to strike out Makarfi’s appeal, on the ground that they have no authority to file it on behalf of the PDP.

The two applicants are contending that by virtue of the Court of Appeal’s judgment, delivered on February 27, 2017 in Port Harcourt, the issue of authentic leadership for the PDP has been settled.

They are also contending that since the Makarfi led leadership had lost at the Appellate court, they have no legal standing to file any appeal on behalf of PDP as an Appellant in the suit.

They also insisted that the appeal filed by Makarfi had become incompetent having been filed without the authorisation of the PDP or its leadership.

Justice Tanko mohammed, who presided over the five man panel of the court fixed May 4 to hear the two motions.

It would be recalled that the Senator Ahmed Makarfi led faction, had filed an appeal at the Supreme court to challenge the decision of the court of Appeal, which affirmed Senator Ali Modu Sheriff faction as the authentic leadership of the PDP. 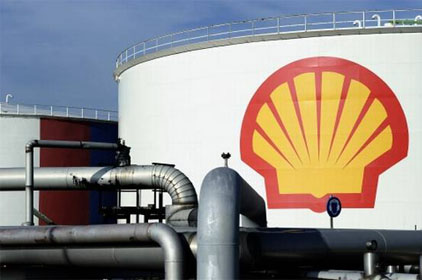 Internally Displaced Persons (IDPs) from communal crisis in Nasarawa State in 2014 have been returning to their lost homes since the February resettlement exercise by the state government amidst many challenges.

Among the challenges some of the returnee IDPs have been faced with are insecurity and lack of basic needs like accommodation, educational and health facilities.

Public institutions like schools, police stations, hospitals and palaces were destroyed during the crisis.

In Ugah and Assakio communities, where Channels Television visited, residents pointed to the fact that there was no functional Police station, raising concerns about impending threat to civil peace as they go about rebuilding their homes.

The IDPs in Ugah and Tudun Adabu also complained of lack of Police presence since their return four months ago.

However, the Police have reacted by saying that they would keep patrolling the areas until peace returns before restoring Police posts in the areas.

Governor Al-makura, at the weekend, deployed a mobile clinic in addition to relief materials already sent to some of the communities, emphasizing the importance of the medical intervention in the resettlement exercise.

Meanwhile, IDPs in Tudun Adabu complained about the diversion of funds by some individuals to sabotage the State Governor’s effort.

It was acknowledged that the government’s motive in distributing relief materials might be genuine and there were calls for it to ensure that the relief materials reach those in dire need of them – Internally Displaced Persons. 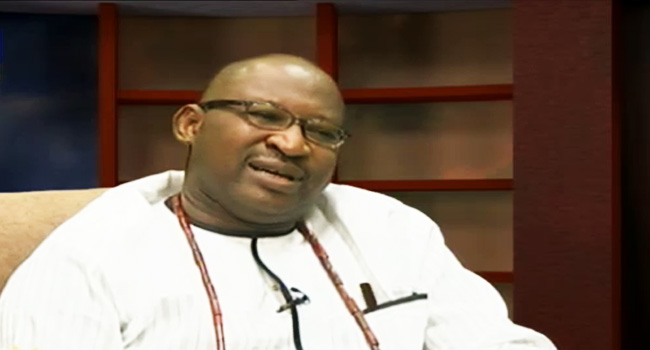 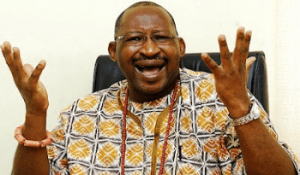 The Chief of Staff to the Edo State Governor, Patrick Obahiagbon, says the President of Nigeria, Goodluck Jonathan, does not have the powers to remove the Chairman of the Independent National Electoral Commission (INEC), Professor Attahiru Jega, noting that he is not a civil servant but a public servant.

Obahiagbon said in a chat with Channels Television, Benin, Edo State capital, that any attempt to remove Jega at this period would lead to a constitutional crisis.

Being a Legal Practitioner and a former House of Representatives member, he stated that plans to remove the INEC boss was unconstitutional.

In recent times, there had been controversies surrounding a purported removal of the INEC boss.

The House of Representatives in Nigeria has also warned against the removal of  Professor Attahiru Jega, by any individual or institutions.

The warning came on Tuesday after a motion, seeking to stop any planned removal of Professor Jega was adopted by the House.

The issue was also echoed by the Speaker, Aminu Tambuwal, when he received members of the Nigeria Civil Society Situation Room at the National Assembly.

However, during his Presidential Media Chat in February, President Goodluck Jonathan had said that there were no plans to sack the Chairman of INEC, saying “the rumours belonged to the garbage world”. 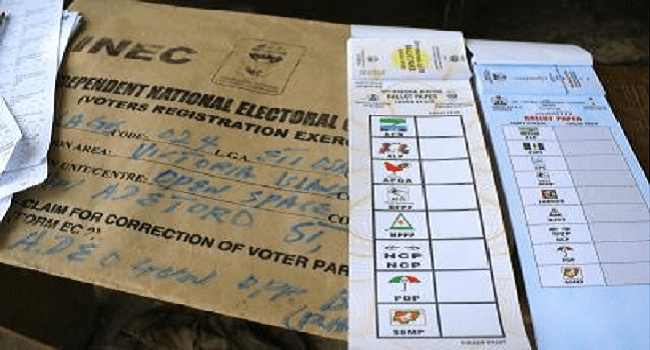 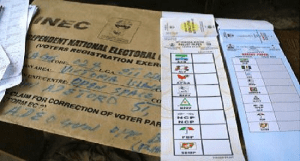 Socio-Economic Rights and Accountability Project (SERAP), Corruption Watch UK, and the African Network for Environment and Economic Justice (ANEEJ), have sent an open letter to the  INEC Chairman, seeking his clarifications on the contracts for printing ballot papers for the forth coming elections.”

In their joint statement, the groups expressed concern at suggestions that INEC may have overpaid considerably for the ballot papers.

“Information passed to us suggests that INEC may have paid as much as four times more for the ballot papers than they cost to produce. If true, this raises serious issues of transparency and accountability in the procurement process by INEC, and will amount to a fundamental breach of the UN Convention against Corruption, to which Nigeria is a state party.”

The groups also argued that, “Transparent, competitive and efficient procurement systems are part of the broad measures needed to curb corruption in the electoral process, and to achieve a fair political process and ultimately, the rule of law.”

The groups therefore requested Professor Jega to use his “good offices and leadership to urgently and widely publish the contracts that INEC entered into for the ballot papers with a full break down of costs and the number of ballot papers ordered, and the companies that will print the papers.”

“At the very least, INEC should put in the public domain the cost of the contracts, the number of ballot papers specified in the contract, and the companies with which contracts have been entered into. We would also be grateful for clarifications on the process for the bidding for the contracts,” the groups added. 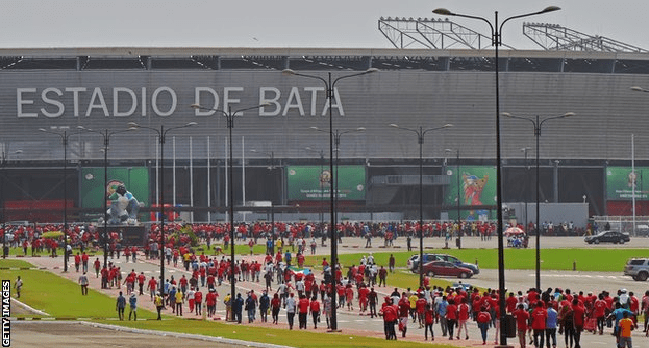 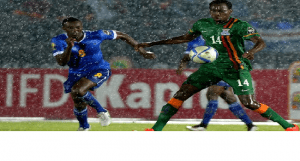 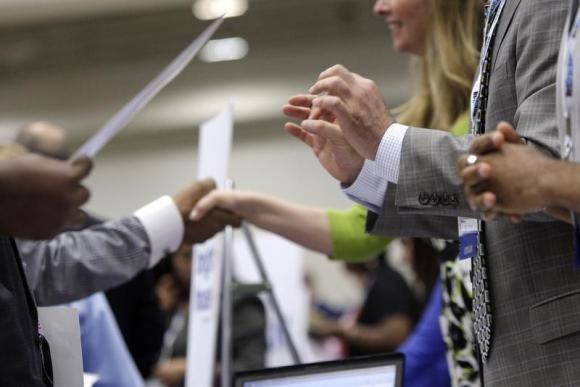 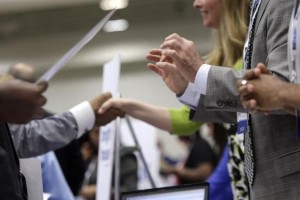 Initial claims for state unemployment benefits ticked up 2,000 to a seasonally adjusted 304,000 for the week ended April 12, the Labor Department said on Thursday. They stayed close to a 6-1/2 year low touched the prior week.

Economists polled by Reuters had forecast first-time applications for jobless benefits rising to 315,000.

U.S. Treasury yields hit session highs on the data, while stock index futures and the dollar were little changed.

The four-week moving average for new claims, considered a better measure of underlying labor market conditions as it irons out week-to-week volatility, fell 4,750 to 312,000, the lowest level since October 2007.

A Labor Department analyst said no states were estimated and there were no special factors influencing the state level data.

The claims data covered the survey week for April nonfarm payrolls. Despite last week’s increase, claims were down 19,000 between the March and April survey periods, which suggests an acceleration in job growth.

Job growth averaged about 195,000 per month in February and March, with the unemployment rate holding at near a five-year low of 6.7 percent over that period.

Labor market indicators such as job openings, the duration of unemployment and short-term unemployment, suggest some tightening in conditions.

On Wednesday, Federal Reserve Chair, Janet Yellen said it was “quite plausible” the economy would be back to near full employment by the end of 2016.

The economy is gaining traction after being held down by an unusually cold and snowy winter. Retail sales and industrial production have been robust. Employment has picked up and there is a bit of inflation in the economy.

The health of the labor market will most likely determine when the U.S. central bank will start raising benchmark interest rates, which it has kept near zero since December 2008.

The Fed is expected to conclude its monthly bond buying program later this year and most economists expect the first rate hike will be in the second half of 2015.

The claims report showed the number of people still receiving benefits after an initial week of aid dropped 11,000 to 2.74 million in the week ended April 5. That was the lowest level since December 2007. 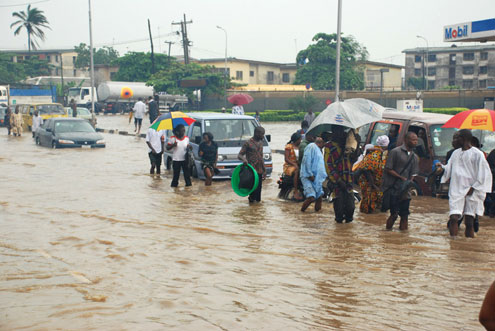 Nigerians living along the Niger River basin should brace up for more flood this year, going by the latest warning from the Nigeria Meteorological Agency.

The MET office gave the prediction while presenting its report of this year’s rainfall expectations.

It put the commencement of the rains from February running through June, with a lull between early October and late December across the country.