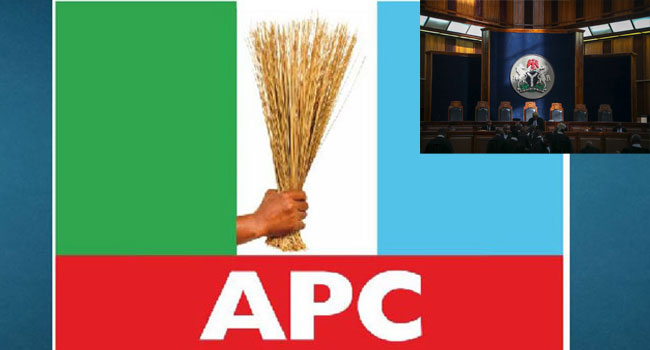 The All Progressives Congress (APC) has hailed the Supreme Court’s dismissal of the appeal filed by the Peoples Democratic Party (PDP) and its presidential candidate, Atiku Abubakar against President Muhammadu Buhari’s 2019 presidential election victory.

The party in a statement signed by its National Publicity Secretary, Lanre Issa-Onilu, described the judgement as ‘apt’, adding that the judiciary stood firm in stating that the appeal lacked merit.

A 7-man panel led by the Chief Justice of Nigeria, Justice Tanko Muhammad, on Wednesday, dismissed Atiku’s appeal for lacking in merit, after going through all the documents and exhibits filed in the case about a fortnight.

“Following the earlier judgement of the 2019 Presidential Election Petition Tribunal which dismissed in its entirety the PDP and Atiku’s petition, the Apex Court was apt in dismissing the appeal for lacking merit.

“The Party hails the Judiciary for standing firm in the face of the PDP and Atiku’s subterfuge and for siding with the Nigerian electorate who through their votes decided to do away with PDP’s ignominious past and re-elect the President Buhari-led APC administration which has ushered in a new era of progressive growth for our country.”

The APC enjoined the PDP to take the defeat in good faith and halt any planned agenda against Nigeria.

“With the ruling of the Supreme Court, which has finally affirmed President Buhari’s election victory, we enjoin the PDP and Atiku to jettison their destructive and disruptive agenda against Nigeria, which they have made up their minds to pursue for the next four years.

“The PDP and Atiku should not confuse opposition politics for their unpatriotic agenda. Democratic politics cannot be practiced in the state of anarchy, confusion which the PDP and Atiku wish to achieve. Such a diabolic plan will definitely fail.”

The first female Justice of the Supreme Court, Retired Justice Olufunke Adekeye, has called on the Federal Government to review the condition of service of judges to prevent legal minds from retiring into penury after many years of service to the nation.

Justice Adekeye made the appeal at a valedictory session in her honour at the Supreme Court in Abuja on Wednesday, where she stated that many judges retire with gratuity that is not enough to sustain them in retirement.

The retiring Justice further claimed that her retired colleagues do not enjoy the monetization of their official residence like their counterparts in the civil service while the judiciary has no alternative arrangement for their accommodation after retirement.

She also called for the establishment of a virile body of retired judicial officers and legal practitioners to serve as a committee of elders and a reference body for members of the profession, while also advocating for all retired justices of the Supreme Court to automatically become a life-bencher considering the number of years they have put into the profession.

The Chief Justice of Nigeria, Justice Mariam Aloma Muktar, opened the ceremony by eulogizing Justice Adekeye for her contribution to the judiciary.

Other speakers, who poured encomium on the retiring justice, used the opportunity to speak on the state of the nation and issues affecting the judiciary.

While the Body of Benchers led by Mr Wole Olanipekun (SAN) demanded stringent conditions for the appointment of judicial officers and zero tolerance for corruption in the judiciary, the President of the Nigerian Bar Association on his part, expressed reservation for the process of the Constitutional Amendment which it described as uncoordinated and without credibility.

Meanwhile the Attorney-General and Minister of Justice, Mr Mohammed Bello Adoke (SAN) announced plans by the Federal Government to put in place stringent laws against terrorism in the country.

In her closing remark, Justice Adekeye called for improved condition of service for justices of the Supreme Court, and the establishment of roles for retired judicial officers and increased number of women as Senior Advocates of Nigeria.

After the speeches, Justice Olufunke Adekeye bowed out of the court for the last time as a justice of Nigeria’s apex court having served 40 of her 44 years career on the bench.

Present at the valedictory session were the Governor of Ekiti state, Mr Kayode Fayemi, retired justices of the Supreme Court and the Appellate court, legal practitioners, federal lawmakers, traditional rulers, and religious leaders.