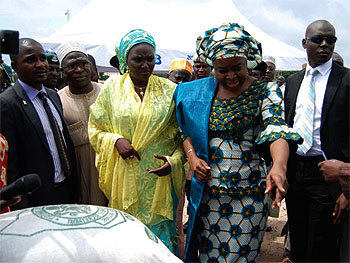 The minister of state for the Federal Capital Territory; Olajumoke Akinjide has been reacting to the news that some farmers may be hoarding grains across the country to cause food crisis following the flooding that ravaged some parts of the country.

The minister while paying sallah homage trip to Preisdent Goodluck Jonathan and Vice President Namadi Sambo at the Presidential Villa, also leading a delegation of FCT residents and clerics said that hoarders will do so at their own peril because the country has a enough grains to release at strategic times.

She appealed to Nigerians whether Muslims or Christians to be their brothers keepers an avoid profiteering at other peoples misfortune. She said that the Federal Capital Territory administration will give a human face to issues that concerns the residents wherever they are.

The president re-assured that the Federal Government had enough grains in the National Strategic Reserve which would be released into the system.

He said, “Nigerians should not be afraid that there may be hunger in the land or shortage in food supply as a result of the food incident. We have enough grains in our strategic reserves. The percentage of the farmlands that have been affected by the recent flood is not so high.

“We have enough grains in the National Strategic Reserves that we will release if the nation is threatened by food shortage. But we are not threatened. The people hoarding grains are doing so at their risks and not in the best interest of the country.”