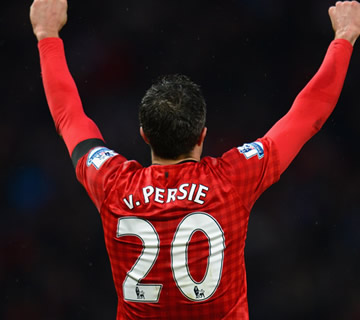 According to the Premier League Season Review 2013/14, Van Persie was ahead of Liverpool pair, Steven Gerrard and Luis Suarez, in having the most fans use his name last season.

Suarez has since moved away from Anfield, after a £75million deal with Spanish side, Barcelona, but Liverpool fans across the world previously flocked to have the Uruguayan on their replica kit.

On signing for Arsenal at the beginning of the 2012/13 season, Mesut Ozil’s reputation was plainly evident with hundreds of people pictured with the strip accompanied with the Germany star’s name ahead of his first game.

Unsurprisingly, Wayne Rooney is consistently in the top 10 and that was no different in the last campaign as the continued sale of ‘Rooney 10’ shirts goes some way to explaining why United have always been so desperate to keep the striker and only heightens the perception that the club’s global brand is as important as results.

Shinji Kagawa has shifted loads of Manchester United shirts since his move from Dortmund, largely because of the Japan midfielder’s vast appeal in Asia and not necessarily because of his on pitch form.

Others included in the top 10 shirts sale; Chelsea’s Eden Hazard, who has become the main attraction in Jose Mourinho’s team; Manchester City’s Sergio Aguero, who missed a chunk of last season but fans still wore his shirt; Juan Mata, whose transfer from Chelsea to Old Trafford in January sparked more sales for Manchester United, and Frank Lampard, who left Chelsea on free last season and is now with Manchester City on a 6 months loan.

The ranking is based on worldwide shirt sale and is compiled by Sporting iD, who since 1993 have developed the technology behind the players and replica products of the Premier League.