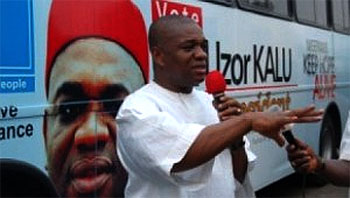 The entire PDP from the three senatorial zones of Abia State has staged a protest march to the government house in Umuahia against the reported return of former Governor Orji Kalu, to the party.

The protesters numbering over thousands marched round the government house in Umuahia, in protest against any move to re-admit the former governor into the party.

Carrying Placards with inscriptions that read ‘’OUK means confusion “Abia grassroots say no to the return of Orji Uzor Kalu to PDP’’,’’PDP Igbere ward A: Orji Uzor Kalu is not our member’’ among others.

According to Emma Ukwu-Rocks (Abia north), the peace and unity in Abia should be sustained as it has provided infrastructural development and cordial relationship with the Federal Government stating that the wishes of the party faithful in the state should be the priority of the national party secretariat.

Receiving the protesters on behalf of Governor Theodore Orji, the Deputy Governor Emeka Ananaba thanked them for the peaceful manner they conducted themselves and promised to convey their message to the governor.