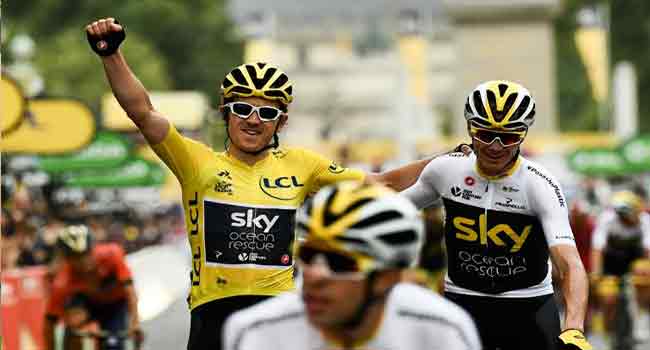 The 32-year-old became the third Briton to win the Tour after Wiggins, who triumphed in 2012, and Team Sky teammate Froome, who had won four of the previous five races.

Wiggins expects Thomas’s profile to increase significantly on the back of his victory, saying he “may now be Wales’s biggest sports star”.

“A lot of people win things like this and they get caught up in the moment and don’t realise what they’ve achieved,” he said on Eurosport.

“But with Geraint, he’s watched the Tour since he was a kid and to him he knows what it is. I don’t think he ever imagined this would happen.”

Wiggins, also a former Team Sky rider, feels Thomas is entering his prime and is in a strong position to retain the yellow jersey in 2019.

“He’s at that ripe age now, 32. He’s matured as a person and an athlete and his laid-back approach will continue to carry him through,” said Wiggins.

“This success won’t change him at all and I wouldn’t put it past him to win again next year. This could be the start for him now. He’s won the Tour and it will only drive him on to do it again.”

Wiggins believes the hostile reception for the dominant Team Sky during the race could have given them extra motivation.

“I think for Sky it spurred them on, there was a definite unity with them,” he added. “This isn’t the first time they’ve had this, they’ve had it for a few years now.

“Sky work the hardest as a team. The Tour de France is the highlight of their season.

“It’s not fair for them to be accused of being too dominant. Yes, they have big budgets and some teams can’t compete with that, but you can’t blame that on them. You can’t blame Sky coming in and putting money into the sport.”