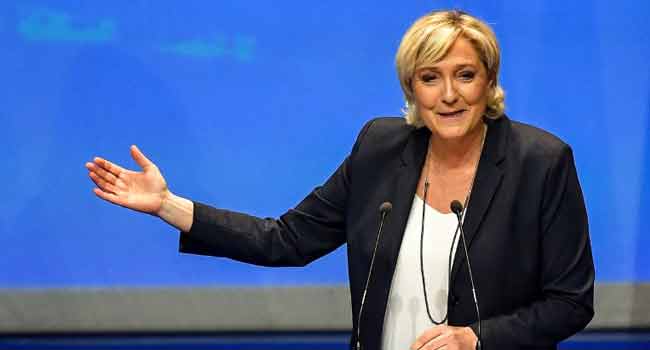 French far-right leader Marine Le Pen proposed changing the name of her party to the National Union on Sunday as part of efforts to improve its image after she was re-elected for a third term as leader.

At a party conference in the northeastern city of Lille, the 49-year-old suggested scrapping the existing name of the National Front (FN), which it has used since 1972 when it was co-founded by her father Jean-Marie.

The switch is meant to signal a new beginning and a decisive break from the toxic past of Jean-Marie who has a long history of making racist and anti-Semitic remarks.

He was finally banished from the party on Sunday, marking the final act in a vitriolic and highly personal power struggle between him and his daughter who took over the party in 2011.

Le Pen said the National Front name was “associated with a glorious and epic history that no one can deny” but she said it was also an impediment that prevented the party winning power in elections.

“For a lot of French people, even those who are sincere, it’s a psychological barrier,” Le Pen said of the historic name, adding that it stopped people becoming members and casting their votes for her.

National Front members are to be asked to vote on the name change and she promised to abide by their decision.

Le Pen scored a lower-than-expected 34 percent as she lost to President Emmanuel Macron in last May’s national election and has since struggled to assert her authority after admitting to mistakes during her campaign.

She addressed the party faithful after being re-elected as their leader with 100 percent of votes on Sunday morning after standing unopposed.

The divorced mother of three won a major boost on Saturday from former Donald Trump aide Steve Bannon who appeared alongside her at the National Front conference and told delegates that “history is on our side”.

Bannon’s appearance reinforced the links between the Trump campaign and France’s far-right party which hold similar views on immigration, Islam, trade, the European Union and Russia.

The presence of the former head of Breitbart News drew a stinging response from Macron’s government.

“The king of fake news and of white supremacists at an FN summit… why am I not surprised?” remarked parliamentary affairs minister Christophe Castaner, who is also the head of Macron’s centrist Republic on the Move party.

“Change of name but not of the political line.”

Le Pen’s bid to change the party’s name does not have unanimous support at the grassroots level and has been heavily criticised by Jean-Marie, who sees it as an attack on his legacy.

The party canvassed 51,000 members last year about the new name proposal and on Saturday it emerged that just 52 percent had voted in favour among the 30,000 who responded.

That compared with 90 percent of respondents wanting a referendum on continued EU membership and 98 percent wanting to cut immigration to France.

Speaking Saturday, FN youth leader Gaetan Dussausaye admitted the party had to “swallow its pride” as “the FN brand is still a block for voters”.

The National Front was co-founded by Jean-Marie Le Pen in 1972 and led by him for nearly 40 years until he was replaced by his daughter Marine in 2011.

She attempted to banish him from the party in 2015 after he repeated his belief that the Nazi gas chambers were “a detail of history”.

The party voted to strip him of his role as honorary president on Sunday.