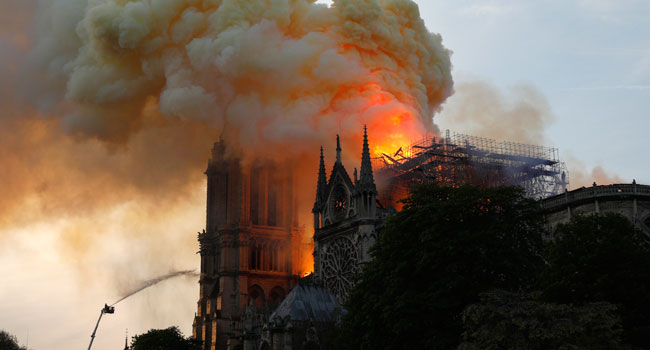 Tragedy struck on Monday in France as a fire swept through the roof of the famed Notre-Dame Cathedral in central Paris on Monday evening, sending flames and huge clouds of grey smoke billowing into the sky.

The flames and smoke plumed from the spire and roof of the gothic cathedral, visited by millions of people a year.

Although the fire service said the blaze could be “potentially linked” to ongoing renovations, a spokesman for the cathedral, however, stated that the wooden structure supporting the roof was being gutted by the blaze.

Following the inferno, President Emmanuel Macron was forced to cancel a major televised policy speech he was due to give later in the evening.

Reacting to the development, US President Donald Trump in a tweet said: “So horrible to watch the massive fire at Notre Dame Cathedral in Paris. Perhaps flying water tankers could be used to put it out. Must act quickly!”

Many French citizens were still reeling in shock as they watched in disbelief the building consumed by the flames. 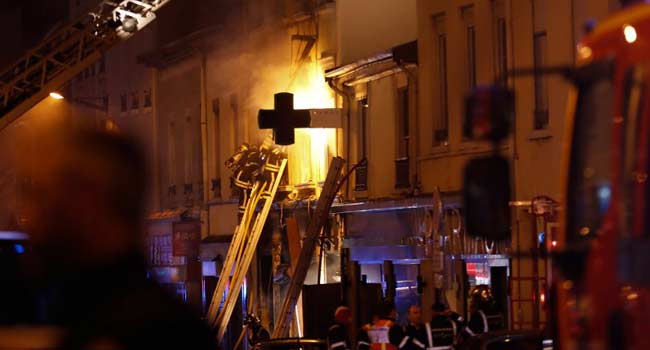 A woman and a child were killed in a fire in the eastern city of Lyon believed to have been sparked by a gas blast in a bakery, authorities said.

The fire comes days after 10 people were killed in a blaze at a Paris apartment building and a month after a massive gas explosion in the centre of the capital that left four dead in a building that also housed a bakery.

The Lyon fire broke out Saturday night after the blast in the bakery on the ground floor of the two-storey building.

“Two bodies were found, that of a woman and a child,” Lyon’s public prosecutor Nicolas Jacquet said, adding that police were investigating the cause of the blaze.

Witnesses told AFP that a man who suffered minor injuries after jumping from the second floor told the fire service that his pregnant wife and child were still inside. Three passersby were also slightly hurt.

“Blue flames several metres high rose up from the bakery and engulfed the upper floors,” Chahine Reghi, a man living across the street, told AFP.

Tuesday’s inferno in Paris was started by a resident with psychological problems, investigators said. The suspect, who is in her 40s, has been charged over the fire, which was the deadliest in the city in over a decade.