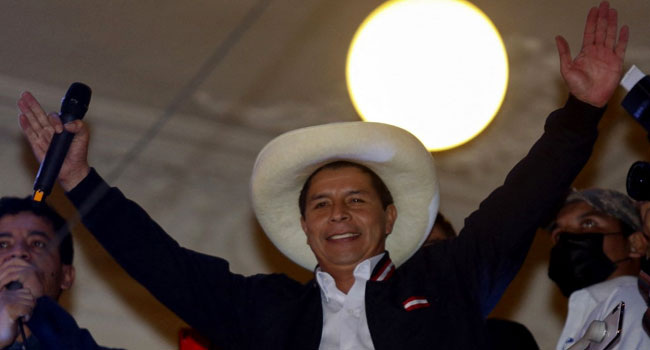 A rural schoolteacher turned politician Pedro Castillo was proclaimed Peru’s president-elect Monday, six weeks after a polarizing vote of which the results were delayed by claims of electoral fraud from his right-wing rival, Keiko Fujimori.

“On behalf of my family I would like to salute the electoral authorities… and also to salute the political parties that have taken part in this democratic celebration,” Castillo told supporters gathered at the headquarters of his Peru Libre (Free Peru) party in Lima.

“Dear compatriots, I bring here an open heart for each and every one of you,” he declared from the balcony after Jorge Luis Salas, head of the JNE elections jury, announced his victory in a brief virtual ceremony.

READ ALSO: Malawi Runs Out Of Coronavirus Vaccines As Second Jabs Due

In a gesture to Fujimori, 46, the president-elect urged her to help “take the country forward” and said he held “no resentment” despite the many attacks he had fielded in recent weeks.

A crowd of hundreds that had spent weeks outside the JNE headquarters to support Castillo broke out in celebration at the news.

“Finally, we have a president,” said Rosa Huaman, a 27-year-old Castillo supporter among the chanting crowd.

The JNE validated the vote count by the ONPE elections body, which had given Castillo 50.12 percent of the ballots cast, some 44,000 more than Fujimori — most of whose objections the jury dismissed.

Fujimori had pledged earlier Monday to recognize the result “because it is required by the law and the constitution that I have sworn to defend.”

She had claimed fraud despite observers from the Organization of American States, the United States and European Union declaring the vote free and fair, and her backers had called for fresh elections.

The US embassy in Lima congratulated Peruvians on successful elections.

“We value our deep ties and hope to strengthen them with the president-elect Pedro Castillo after his inauguration,” it said on Twitter.

The government of Venezuela’s leftist President Nicolas Maduro — whose 2018 reelection the United States and others do not recognize — congratulated Castillo in a statement.

Maduro, it said, wished Castillo “much wisdom” in his new role and looked forward “to work hand in hand with the new government in Peru.”

This was Fujimori’s third unsuccessful stab at the presidency, with failed bids in 2011 and 2016 giving rise to charges she took money from scandal-tainted Brazilian construction giant Odebrecht.

Prosecutors have said they would seek a 30-year jail term for Fujimori.

Under Peruvian law, the case against her would have been suspended if she had become president until after her term.

The new president is due to be sworn in on July 28.

Castillo in April surprised many by taking the lead in the race to become Peru’s fifth president in three years, edging out 17 other candidates.

He faced Fujimori in the runoff with promises to improve the fate of Peruvians contending with a recession worsened by the pandemic, rising unemployment and poverty.

Castillo has targeted creating a million jobs in a year, and said Peru’s mining and hydrocarbon riches “must be nationalized.”

Peru is a major producer of copper, gold, silver, lead and zinc, and mining brings in 10 percent of national GDP and a fifth of company taxes.

Castillo has also promised public investment to reactivate the economy through infrastructure projects and public procurement from small businesses, and to “curb imports that affect the national industry and peasantry.”

Among his more controversial campaign promises, Castillo has vowed to expel illegal foreigners who commit crimes in Peru, giving them “72 hours… to leave the country.”

The comment was perceived as a warning to undocumented Venezuelan migrants who have arrived in the hundreds of thousands since 2017.

The far-left trade unionist was largely unknown until he led a national strike four years ago that forced the then-government to agree to pay rise demands.

He is Catholic and vehemently opposed to gay marriage, elective abortion and euthanasia.

To combat crime, Castillo has proposed withdrawing Peru from the American Convention on Human Rights, or San Jose pact, to allow it to reintroduce the death penalty.

He has also mooted replacing Peru’s free-market-friendly constitution — a relic of his rival’s father, ex-president Alberto Fujimori, who is serving jail time for corruption and crimes against humanity.

Peruvians voted for their fifth president in three years after a series of crises and corruption scandals saw three different leaders in office in a single week last November.

Seven of the country’s last 10 leaders have either been convicted or are under investigation for graft.

Peru has been hard hit by the coronavirus epidemic. With nearly 200,000 deaths, it is the country in the world with the highest mortality rate.