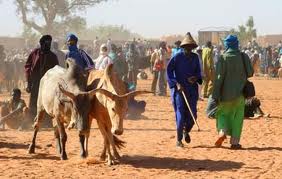 At least 13 Fulani herdsmen were reportedly killed in Karim Lamido local government area  of Taraba State, by suspected Bachama farmers who allegedly raided some villages in the early hours of Sunday.

According to the National secretary general of Miyetti Allah, Sale Bayari,  ” the suspected Bachama farmers from Numan area of Adamawa State attacked Fulanis in the neighbouring  villages of Kana, Bujum, Yitti, and Mayo-Lope of Lau local government area of Taraba State.”

Mr Bayari said: “At Mayo-Lope, they killed Babangida Hassan and Buba Musa  and dumped the corpses in shallow wells.”

He claimed that some of those killed “were complying with the eviction order given by the Bachama only for them to be attacked and killed while crossing River Benue.’’

The Cross River state government has decided to send back the 3,000 Fulani herdsmen camping at Bagga, Besenge and Utanga communities in Obanliku Local Government Area of the state.

Governor Liyel Imoke Imoke, who stated this on Tuesday when he visited the internally displaced persons, said the herdmen will be repatriated after arrangements are completed with their respective state governments.

The Governor said the State Emergency Management Agency has been directed to attend to the displaced persons by making available for them some relief materials.

He also assured that a detachment of policemen would be deployed there to ensure safety of lives and property.

A spokesman for the displaced persons, who spoke through an interpreter Alhaji Yusuf Usman, said they fled their homes in Takum, Taraba State due to inter-tribal war between the Fulani and the Tiv. According to him, they had initially moved to Katsina Ala in Benue State from where they fled to Obanliku after threats to their lives.
The refugees thanked the Cross River state government for supplying them with foodstuffs, mattresses, mats and blankets.

The officers, attached to the Special Task Force, were gunned down at their duty post at Palang by Fulani herdsmen who are also suspected of being behind the murder of three people at Tahoss in the same region that night.

The felled policemen were identified as Corporals Safiyanu Suleiman and Thomas Kozah.

Confirming the killings, the police spokesman said it had been a surprise attack with the gunmen opening fire on their unsuspecting victims before fleeing the crime scene.

The attacks comes after some 20 gunmen had invaded the Police Staff College in Jos at about 10 p.m. on Monday night, killing two policemen in a gun attack that lasted about half an hour.

Police say they have beefed up security in the area and are ready to ward off any more attacks.