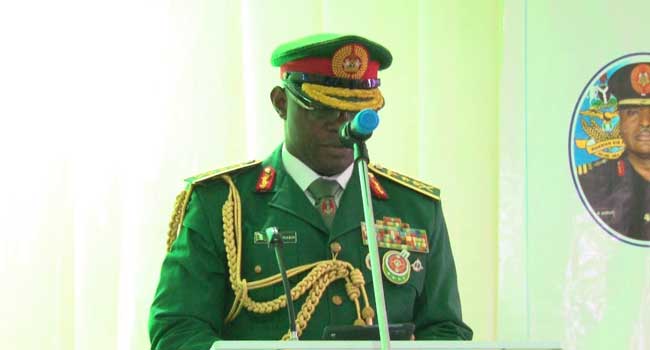 Speaking at the graduation ceremony of the Air Force War College Course 5 in Makurdi on Saturday, the CDS asked the forces to match manpower deployment to latest war equipment procured for effective combat operations.

Olonosakin who represented the Minister of Defence, Major General Bashir Magaji (rtd) challenged the military to redouble efforts in the campaign against escalating acts of insurgency.

“Our beloved country is currently experiencing a myriad of security challenges including act of terrorism in the northeast, pipeline vandalism and crude oil theft in the south south and random acts of kidnapping in many parts of the country.

“These challenges have had severe consequences on the human and material resources of the nation. This makes military involvement in the internal security operations in our country inevitable,” he stated.

On the ongoing war against terrorism, the defence chief commended the Nigerian Air Force Air for its capabilities which he said has boosted the military operations in the northeast.

Similarly, the Chief Of Air Staff, Air Marshal Sadique Abubakar said the training of troops from the Air War collage in Benue State capital has improved the air capabilities of troops in neutralising insurgents. 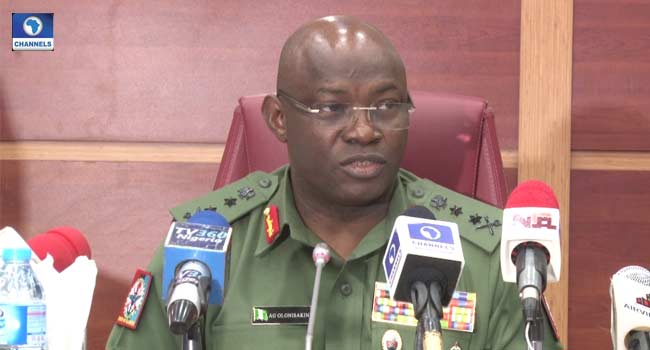 The Defence Headquarters says that intelligence report has revealed plans by some persons to impersonate military men to disrupt the elections on Saturday.

The Chief of Defence Staff, General Gabriel Olonisakin, stated this on Thursday while briefing journalists following a meeting of the Armed Forces and security and intelligence agencies in Abuja.

As the nation prepares for the polls, he warned that the military will not tolerate any act capable of disrupting a peaceful electioneering process.

General Olonisakin said the military was prepared to support the security services to ensure violence-free 2019 general elections, in line with the constitutional responsibilities of the various security bodies.

He also asked Nigerians to disregard the sit-at-home order by some criminal elements in some parts of the country.

“The stay-at-home leaflets being circulated, and similar online messages are part of the handiwork of mischief makers who are bent on scuttling the process and should be ignored.

“I want to assure the general public that the security services are prepared to support the Police to ensure the safe conduct of the elections,” he stated.

According to the Defence Chief, the military will remain apolitical and abide by the code of conduct of the Nigerian Armed Forces in carrying out its duties during the elections.

He, however, warned Nigerians against flouting the order on vehicular movement on Saturday.

“Violators of the restriction on movement, no matter how highly placed, will be arrested and detained,” General Olonisakin cautioned.

He explained that the restriction does not apply to those on election security duties, observers and monitors, as well as emergency and security services personnel on authorised duties.

The Inspector General of Police (IGP), Mr Mohammed Adamu, had announced the restriction of vehicular movement from 6 am to 6 pm on Saturday, as part of the measures to ensure hitch-free Presidential and National Assembly elections.

The Chief of Defence Staff, General Gabriel Olonisakin, says the annual budgetary provisions cannot fund the Armed Forces with its statutory responsibilities of safeguarding the nation.

Olonisakin made the statement when he received the Senate Committee on Defence during an operation review session on Tuesday at the Defence Headquarters in Abuja.

He said, “We have followed due process in implementing these projects some of which were completed in the year 2017. Budgetary provisions alone cannot adequately fund the requirements of the Armed Forces. Thus, alternative funding options need to be given serious consideration.”

The Defence Chief appealed to the National Assembly to formulate legislation that will address the funding challenge in the armed forces particularly at a time when the nation’s security architecture is under review by the presidency.

In response, the Chairman of the Senate Committee on Defence, Senator Abubakar Kyari, commended the Defence Headquarters in its role in fighting terrorism despite the funding challenges.

He said, “You are all aware that normal appropriation is not enough to sustain military operations especially the type that we have found ourselves in today.

“There is no doubt that the Defence Headquarters plays a crucial role in the coordination of the Armed Forces which has successfully sustained troops in the various operations across the country.

The appeal by the CDS comes during a period of intense engagement of the Armed Forces in the Lake Chad Basin just as other operations occupying various services continue in other parts of the country.